The birth of the standard operating procedure

Frederick Winslow Taylor, an American born on March 20th, 1856, is recognised today as one of the pioneers of management consulting. He was a mechanical engineer that specialised in industrial efficiencies. His work involved applying engineering principles to work done on factory shop floors to achieve efficiencies and increase productivity. 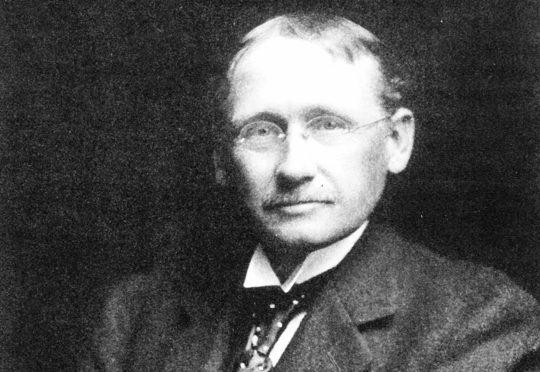 This effectively led to the development of the study on industrial engineering and also management science. His findings were immortalised in the publication of Principles of Scientific Management in 1911.

Taylor’s contribution to the science of management was actually the separation of tasks between planners and executors. The planners were the managers who had the task of thinking. This included designing, planning and specifying the procedures to execute. Meanwhile, the workers were those that executed the tasks as per procedures developed by the managers.

In the implementation of this idea, a management system was developed where the individuals who were mentally alert and intelligent were made to become management and responsible for adopting standards, procedures, and delivery of work by an agreed time. Workers then were people who were physically fit, were given standardised tasks, best practices, and taught to work in cooperation to ensure the faster delivery of work.
Peter Drucker in 1974 said:

Frederick W. Taylor was the first man in recorded history who deemed work deserving of systematic observation and study. On Taylor’s ‘scientific management’ rests, above all, the tremendous surge of affluence in the last seventy-five years which has lifted the working masses in the developed countries well above any recorded level.

Taylor’s approach was strongly based on the science of observation and analysing the work done using a stopwatch, a technique known today as the time and motion study.

He was famously known to break down tasks to its component element and promoting reward-based productivity to employees that followed his recommendation. This of course only succeeded after overcoming various challenges that was brought by labour unions back in the 1910s. Even in the 1980s industries were struggling to learn and adopt his theories and management techniques.

Taylor approach followed a methodology that can be visualised as a process flow shown below: 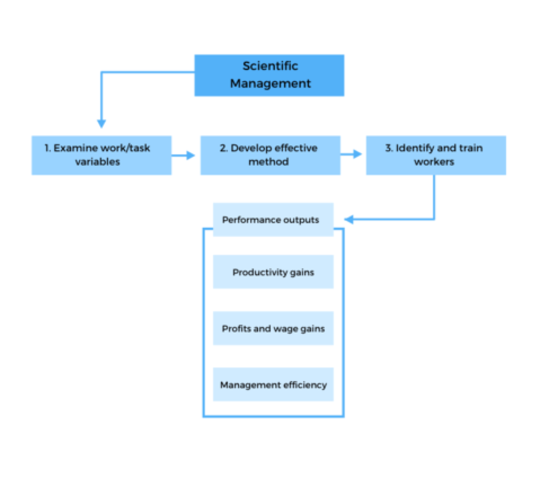 World Wars I and II were times of great disruption. The demand for change increased tremendously and many countries like the US and UK had to adopt the scientific management principles to meet the demands of productivity outputs.

Large numbers of unskilled workers had to be trained to perform skilled tasks in a short period of time to meet productivity demands. Systematic training methods were developed to train large numbers of workers. Ford Motor famously implemented these techniques to first develop the Just-In-Time manufacturing system. 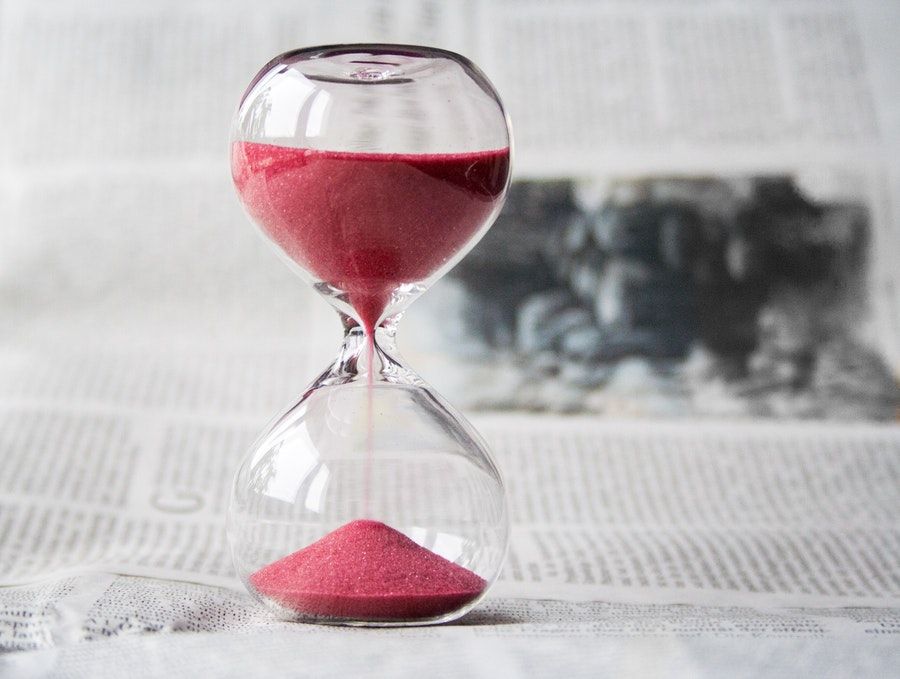 Just as shown in the diagram above, the objective was to identify work and task variables and break them down into their components. These component tasks were then standardised and an effective method of execution was developed (in today’s terminology, one would call it the Standard Operating Procedure or SOP). Finally, workers were trained on how to execute the standardised task as per the SOP.

The urgency for change accelerated the need for effective and efficient output. Output not just from a production shop floor but from the supply chain, logistics, transportation, planning, scheduling, effective time management as well as effective cost management.

Production and logistics planning construction planning evolved from Gantt charts that were used during wartime. Bookkeeping evolved to include analysis of cash flow, balance sheets and P&L statements. Production outputs were measured and quantified, and thereafter defined, diagnosed, specified and communicated. Supply chains were planned, managed, and coordinated based on production outputs, delivery lead times and customer demands.

The need for flexibility led to the formation of functions and departments, teamwork, quality circles and communication. It created the need to effectively manage human resources. At the end of World War II, almost all organisations learned that management had to be evolved into a specialised task that needed to bring resources together in a coordinated way to achieve specific goals and tasks.

Post World War II, Japan and subsequently South Korea adopted these scientific practices. Observations by Taylor and Ford were applied by Taiichi Ohno and Shingo Shengo at Toyota. Thereafter, the Japanese developed and rebranded it as the ‘Toyota Way’ in the 1930s. The problems that were encountered on the shop floor led to the development of ‘Kaizen’ or continuous improvement initiatives and the knowledge and concepts were brought together and formalised as the Toyota Production System.

Essentially, management is about human beings. The critical success of an organisation strongly relies on its workforce executing and delivering output on behalf of management for its customers. The workforce today depends on management for their livelihood and their ability to contribute to the customer and society.

Organisations, firstly, need to evolve from a hierarchical based structure to a flexible, knowledge and information based structure where learning and development are built-in throughout the network of the organisation.

Everyone in the organisation needs to have a thorough knowledge on the theory of business the organisation has adapted, its customers, its value proposition, tasks, processes and the deliverables – which establishes the key drivers of effective management.

Secondly, organisations, need to focus on performance. Organisations need to have plans that allow them to achieve those results and know how to measure success or failure. This has to be built on the clarity of communication and the responsibility of management as well as the employees. 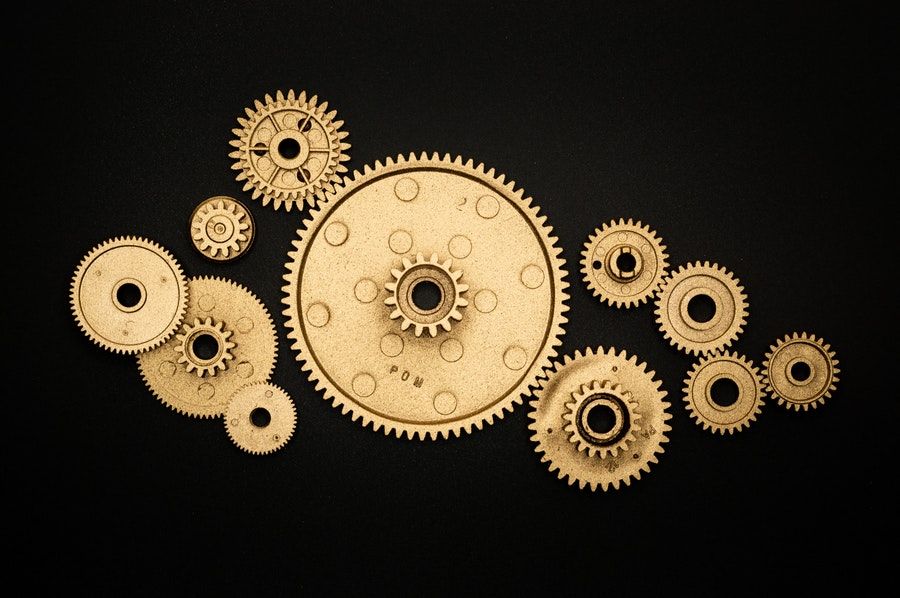 Lastly, organisations need to reflect on the satisfaction of their customers. This is an external measure, as the customer sits outside the organisation and can at any time switch to another organisation that better satisfies their needs.

To achieve this successfully, managers need to lead to become effective and deliver performance. These managers are also leaders of an organisation and they rely on a good management system to support them. This system can be visualised in the diagram below. 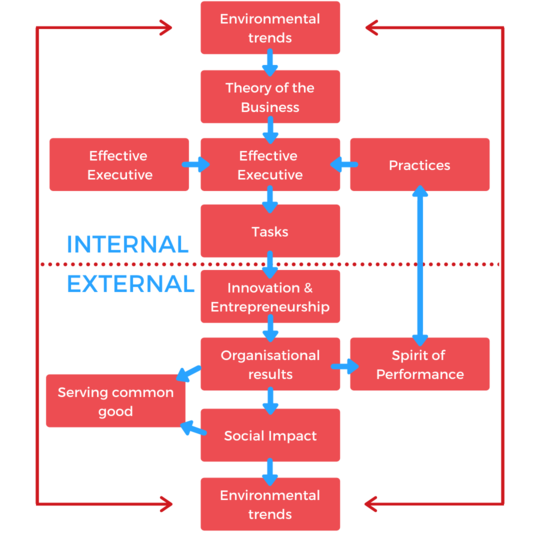 The science of Peter F. Drucker

Peter Ferdinand Drucker was an Austrian born American management consultant. His many teachings, wisdoms and publications have made considerable contributions to the theoretical and practical approaches of modern-day entrepreneurship.

This article is the second in a series of write-ups that explore the ideas of Drucker and how they can be applied to contemporary business models.

Read the first in the series here 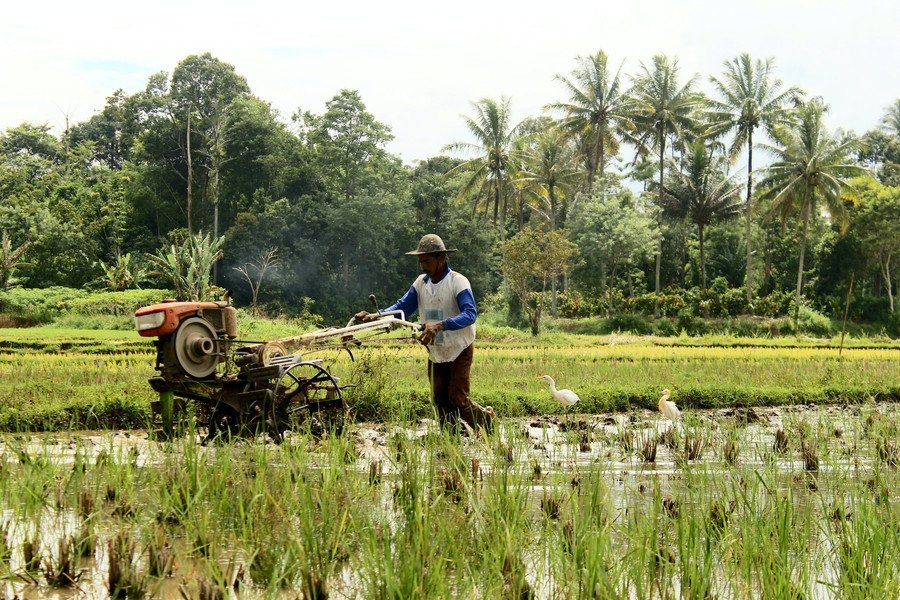 A Sustainable Solution for Thai Farmers