The 100 Most Powerful Women in the World Analysed 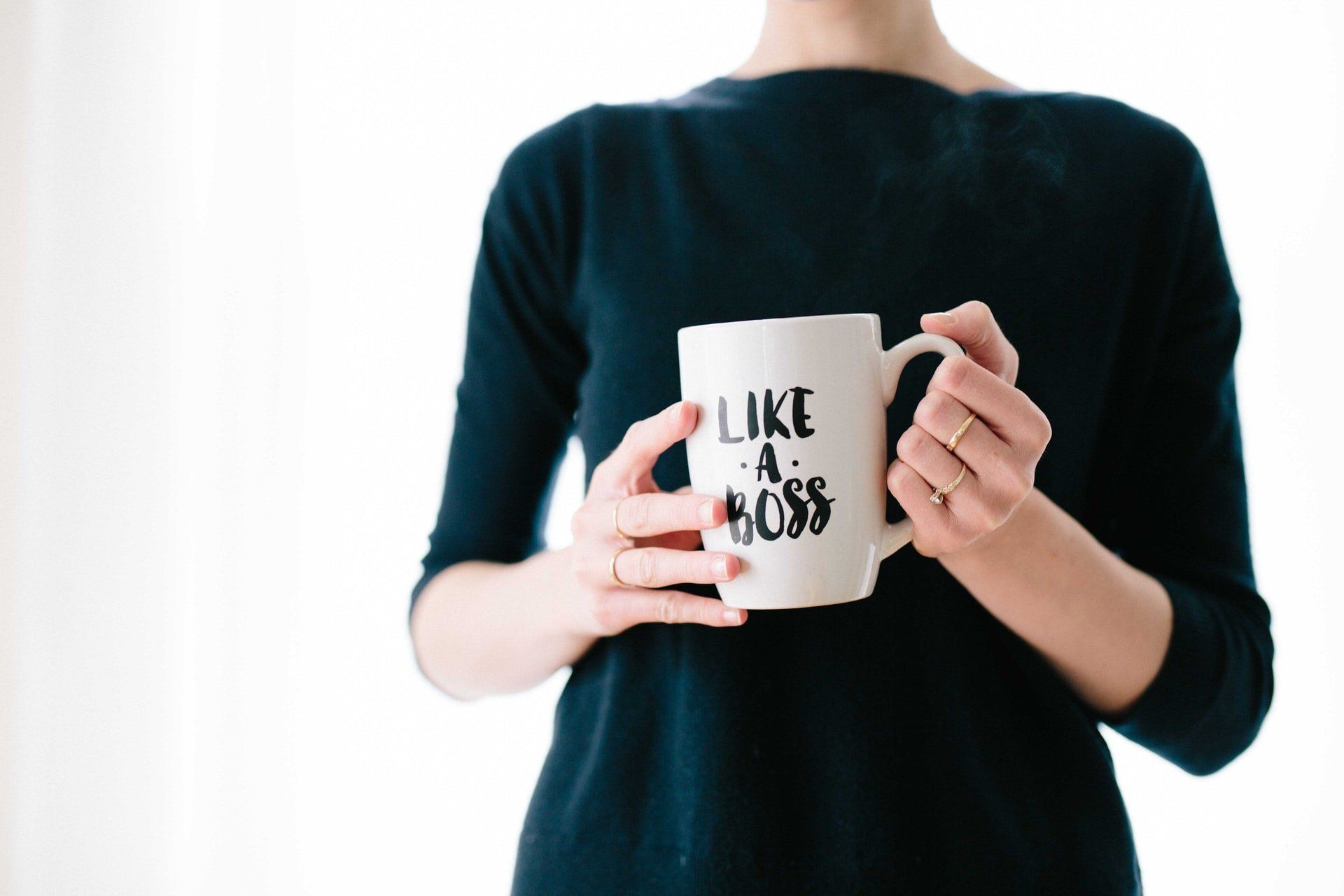 From political superpowers to tech titans, Forbes’ 2017 ranking of the “The World’s 100 Most Powerful Women” runs the gamut of everyone from Oprah Winfrey and Ivanka Trump to Angela Merkel and Facebook’s Sheryl Sandberg.

Ranging in age from 92 (Queen Elizabeth II) to 28 (Taylor Swift), it’s clear no two women are the same. There’s no one quality that’s helped these women climb to the absolute peak of power in their industries, it’s worth asking – what qualities do they share that’s helped set them apart?

To find out, we used IBM’s Watson Personality Insights API to examine speeches, interviews, and even social media commentary to decipher the more intrinsic elements of their personalities. With only a few exceptions, every woman on Forbes’ list has been analysed here.

Read on for a more intimate look at these leading ladies.

According to IBM’s Watson Personality Insights model, there are five core characteristics (appropriately named the ‘Big Five’) that help define how a person engages with the world. These include agreeableness, conscientiousness, extraversion, emotional range, and openness and are made up of personality facets that help individualize each person’s values and actions.

Across Forbes’ list of the 100 most powerful women in the world, openness was the most common personality trait. Described by IBM as ‘the extent to which a person is open to experiencing different activities’, openness includes a person’s imagination, artistic interests, and overall intellectual curiosity.

Across all 100 women, two were particularly inclined toward this trait: Zanny Minton Beddoes, editor-in-chief at The Economist, and Kathleen Kennedy, the president of Lucasfilm at Disney. Ranking at No. 72, Beddoes has been credited with helping The Economist evolve its 174-year-old brand by adopting a larger social media presence in recent years that has helped grow the publication’s reader base by 20 percent.

Emotional range and conscientiousness were also among the most prevailing Big Five traits, personified most clearly by women like Safra Catz (co-CEO of Oracle) and Nikki Haley (Indian-American ambassador to the United Nations). And while agreeableness wasn’t the most prominent Big Five trait, Beyoncé, Anna Wintour, and Oprah Winfrey are still using compassion and cooperation to their advantage. 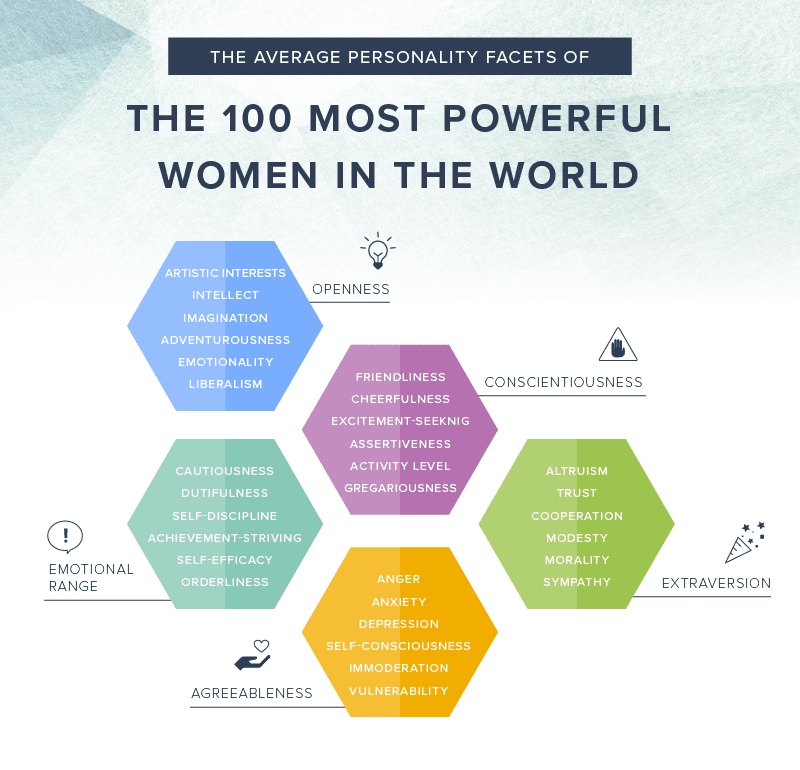 Of course, there’s more to what makes these women special than the ‘Big Five’. Other facets of their personalities have helped them stand out in, and in some ways disrupt, the industries they lead.

Intellect, liberalism, sympathy, cautiousness, and activity level were among the most widely held traits by women like Hillary Clinton, Drew Gilpin Faust (president at Harvard), and Mary Callahan Erdoes (CEO at JPMorgan). Anger, excitement-seeking, and immoderation were among the least common personality traits.

One thing is clear – there’s no single set of personality traits that helped propel these powerful women to their positions.
Among the most common personality traits identified by IBM’s Watson Personality Insights API, five appeared more often than others:

While many of the women on the list exhibited one or more of these traits, others embodied them more fully. Kathleen Kennedy – largely attributed as a driving force behind the vast changes to the ‘Star Wars’ franchise under Disney – had the second-highest level of liberalism, proceeded only by Zanny Minton Beddoes.

Hillary Clinton and J.K. Rowling, author of the “Harry Potter” series, displayed the most sympathy toward others. Like Judy Faulkner (founder and CEO of Epic Systems) and Patricia Harris (CEO of Bloomberg Philanthropies), Justice Ruth Bader Ginsburg had one of the highest levels of cautiousness according to Watson’s analysis. 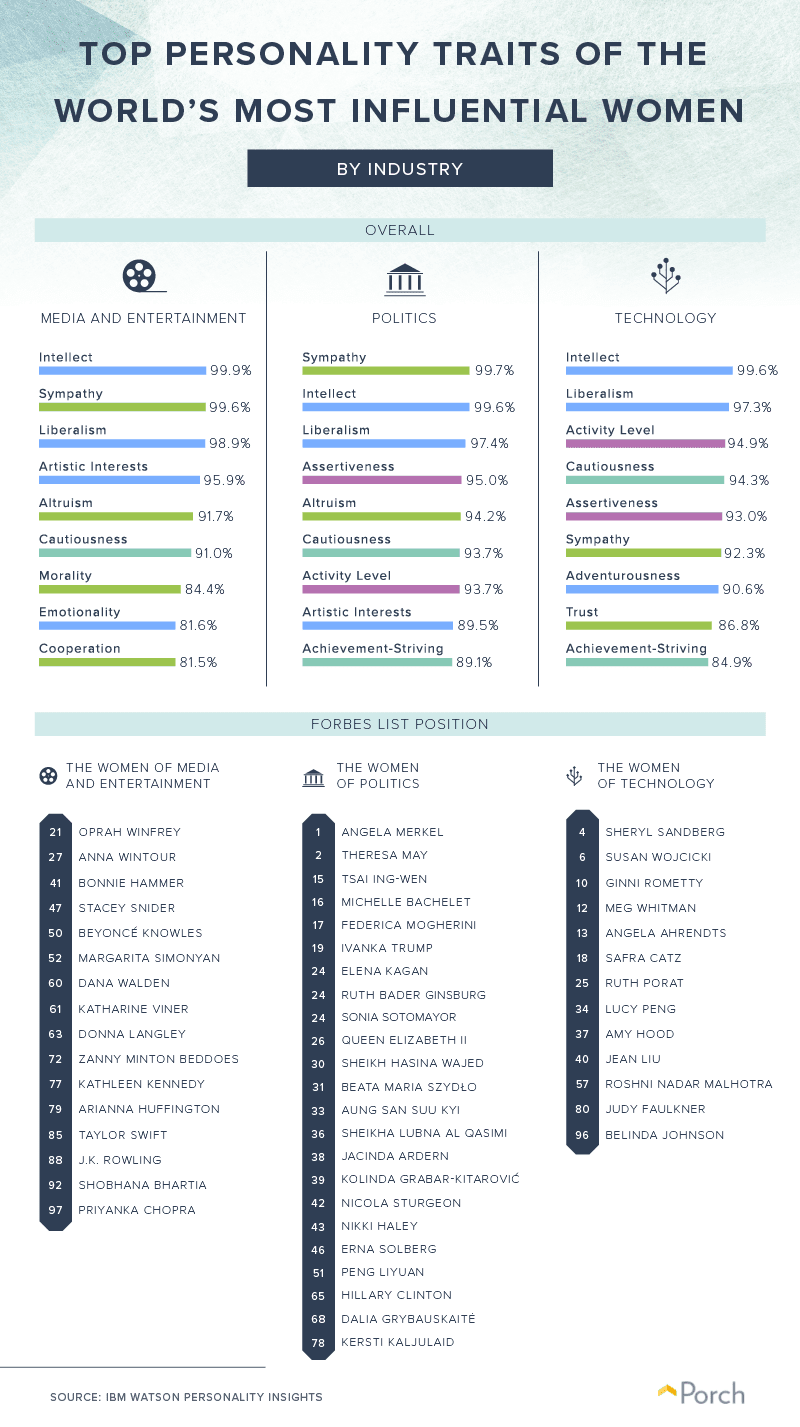 For decades, Silicon Valley has favored men in positions of power and influence. Research shows that even in the same positions, men are offered higher salaries than women in 63 percent of the cases.

These discrepancies in pay can range from 4 percent to 45 percent regardless of the role. Still, the number of women in high-ranking tech positions continues to grow, and certain personality traits may have helped contribute to their success. Intellect, liberalism, and activity level were all common traits found in Sheryl Sandberg (Facebook), Susan Wojcicki (YouTube), Ginni Rometty (IBM), and Meg Whitman (formerly of eBay and HP).

Women’s day-to-day responsibilities may be different, but the skills required to make it into politics might not be so different from tech. Sympathy, intellect, and liberalism topped the list among women in politics including Germany’s Angela Merkel and the U.K.’s Theresa May. The same is true for media and entertainment where Oprah Winfrey, Anna Wintour, and Bonnie Hammer top the list of the most powerful women in the world.

For the 100 most powerful women in the world, here’s a comprehensive look at their personality traits.

In her fourth term as chancellor of Germany, Angela Merkel has spent years in power downplaying the importance of gender in both her success and status. Instead, her toughness and sensibility have helped define her image over time. Her personality – rich with openness, altruism, and cautiousness – has helped her earn the title of the ‘most powerful woman in the world’ according to Forbes’ assessment.

Like Angela Merkel, extraversion and agreeableness were often the least displayed Big Five personality traits, although some women, including Abigail Johnson (CEO of Fidelity Investments), Safra Catz (co-CEO of Oracle), and Adena Friedman (president and CEO of Nasdaq), may be using extraversion – seeking stimulation in the company of others – to their advantage.

A cut above the rest

From the politically savvy to tech giants and entertainment superstars, the path to power for the top 100 women on Forbes’ list is unique. While what has helped them get to where they are today varies from person to person, the personality traits they sometimes share aren’t.

From Oprah Winfrey to Theresa May, one can find overlaps in characteristics even if they execute them differently. Overwhelmingly, each of these women proves that even in male-dominated industries, breaking away from the norm can pay off.

Read More: Woman of the Year, Women of the Century 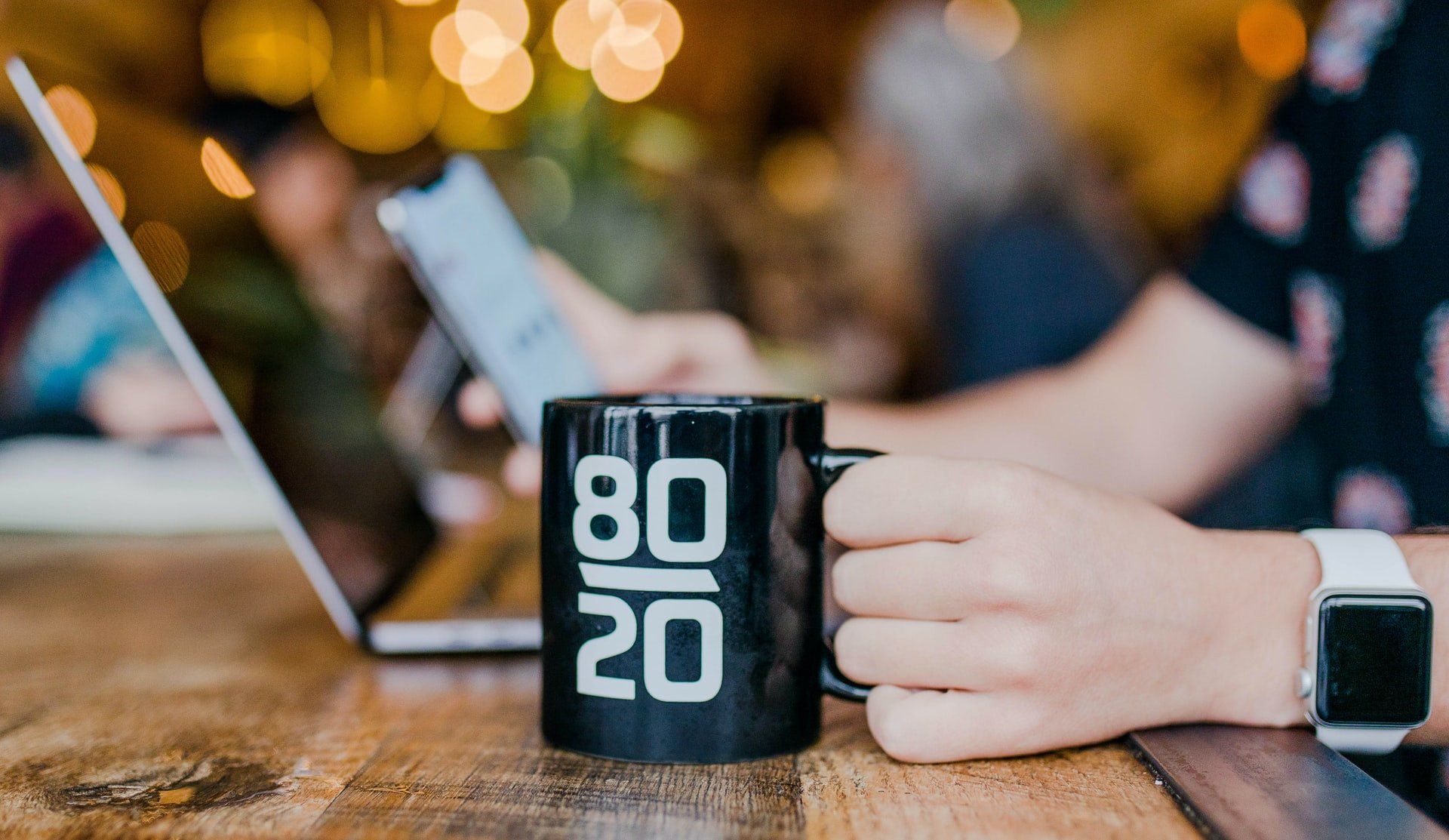 The Pareto Principle: Get More Out Of Less