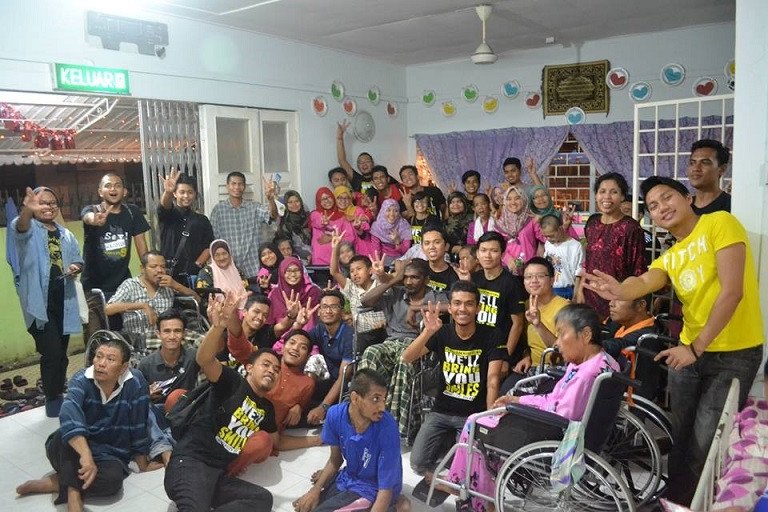 Photo (above): My party members and I (kneeling, in yellow T-shirt) did voluntary work for an OKU centre in Titiwangsa.

It took immense courage and determination to compete as a candidate for a seat in the UM student representative council.

After all, it is a known fact to the public that the UM campus election held annually is one of the most challenging elections where competition is rife.

I am, however, really thankful for the support garnered along the way, especially from my family, friends, seniors and my party “Penggerak Mahasiswa”. I never regretted choosing this path which was overwhelmed with uncertainties, as it offered me a once-in-a-lifetime learning opportunity.

Me (centre) with my friends in the library.

You may ask why I chose this path. Humans are gregarious in nature, hence I strongly believe that humans cannot live in isolation. Nobody is impeccable; we rely on each other to fix our own shortcomings.

In my opinion, I also believe that life is not merely about personal achievements; there is an onus to serve the community too.

This is in line with the words uttered by President Kennedy. He said:

Natural leaders will emanate charisma that will create a following. To be a true leader, one cannot just dictate what others should do. Instead, it is essential for leaders to always lead by example.

Being a student representative

As a student representative, my main priority was to fight for the rights of the students. I pushed for the improvement of general facilities and the implementation of better policies that will be beneficial for students in the long run.

The importance of communication was accentuated in this aspect as we needed to manoeuvre between the students and the management team in order to meet students’ needs. It was imperative to possess negotiation skills to achieve a win-win situation. After all, we were the voices for the students, and we were expected to rise up for them whenever circumstances called for it.

With the advent of technology, we also witness the demise of benevolent acts. As we embrace globalisation, the pace of living has increased incessantly to the point that we often neglect people who are less fortunate than us.

As student representatives, we aspired to reach out to underprivileged people such as the physically challenged groups to let them know that society still cares for them. We also embarked in creating awareness for more people to follow suit, which then culminated in wider participation from the public.

Haters and political opponents within the campus community will always go against you as you execute your duties. Student leaders just have to face them with positivity.

A leader is someone who can stand up against adversity and come out unscathed. Leaders should use these negative experiences as driving forces to catapult them forward.

For me, I carried out my duties with the best interests of students in my mind. I didn’t mind sacrificing my holidays to return to campus whenever a fellow student needed my help.

In short, a leader is always on the move.

If you had an experience during your university/college days that you would like to share, email it in to campus@leaderonomics.com!

Raise Your Game: The Power Of Leadership Engagement