Are You Chasing a Promotion? 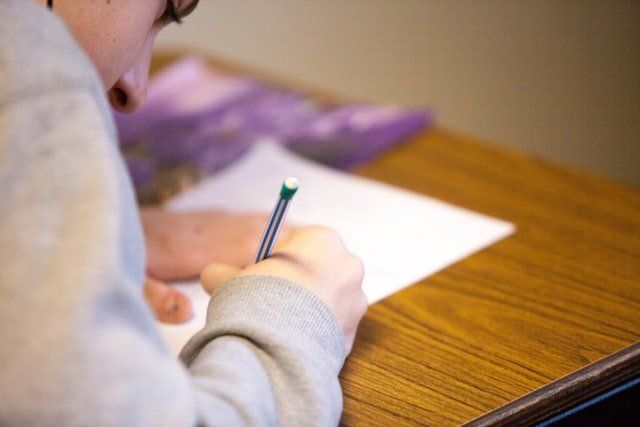 Image by Ben Mullins on Unsplash

How Do Individuals Benefit From A Psychometric Test

Many young professionals may not have the working experience to develop their soft skills and human strengths. So, how in the world are they supposed to grow as an employee in a company? If you’re someone who is proactive in developing yourself rather than passively waiting for change, then look no further. Try taking some of the psychometric tests listed below to climb your career ladder!

What is a Psychometric Test?

Psychometric tests contain a broad range of assessments used to measure specific characteristics about you. The reason for its popularity in today’s society is due to the tests’ validity and reliability as a result of scientific concepts and data, allowing for objective measurements. The credibility of these tests are a result of a long history of scientific research.

In fact, the first signs of psychometric assessments date back to Ancient China in which people were assessed on their fitness for office. In addition, these examinations determined which sectors they would be competent in such as finance, agriculture, military, and law. These were grueling tests that required candidates to take the assessment from morning till night as a test of endurance.

However, a closer depiction of the modern psychometric test that can be found today was first used in the U.S. army during World War I. The reason for these tests was an attempt to predict if a soldier was likely to suffer from “shell shock”.

Interestingly, we can see how these historical uses for psychometric tests had a variety of purposes. This remains to be true in modern day.

Why Are Psychometric Tests Important for Recruiters?

In this day and age, many of us have come to know the psychometric test as a job candidate’s first step before meeting any potential employers. Since competition has risen to great heights, it is not enough to have great technical skills but also to have developed soft skills. Research found that in 2021, 69% of employers globally were having difficulties blending technical skills and human strengths. So, how can a candidate make themselves more competitive?

By gauging characteristics such as their aptitude, communication skills and behavioural traits using psychometric tests, recruiters can develop an idea of how a candidate will behave in the workplace. With an overwhelming amount of people applying for a decent, well-paying job, it just seems impossible to give every candidate the chance for an interview. While it may not seem fair to the candidate, it may be out of the recruiter’s hands due to a lack of resources to accommodate for the amount of competition. This saves time for recruiters to narrow down to a shortlist of candidates.

Recruiters have a wide array of psychometric tests available to them to understand different aspects of a candidate.

Here are just a few of the common psychometric tests a recruiter uses:

This test aims to measure your cognitive abilities such as your logical, numerical and verbal abilities. These abilities are necessary in a majority of jobs. Thus, one’s level of proficiency in these abilities acts as a great predictor of how competent a candidate would be in their job.

The purpose of these tests is to assess your behaviours such as style of communication. Hiring a candidate with a preferred style of communication that matches the current team allows for easy transitions and good team work. Also, it could be used to gauge how you would perform under stress. This provides insights to the recruiter on whether you are able to perform in a high-stress environment.

By deciphering your personality traits, the assessments may reveal your attitudes, values and more. This may be useful to recruiters who are looking for someone with particular personalities such as extroverts. Also, recruiters may use this information to assess your values to see if you would be a good fit for the organisation.

Thus, we can clearly see how recruiters get a sneak peek into what kind of worker we may be using psychometric tests. In the past, recruiters could only hire someone based on what they could perceive from the candidate through an interview, but often people hype themselves up and pretend to be someone they’re not. Whereas, a psychometric test is much harder to fake, revealing someone’s true colours. This way, a company saves time, energy and money spent on training a new candidate by setting themselves up for a better chance of retaining the new hire.

As A Job Candidate, How Can A Psychometric Test Benefit You?

Whilst recruiters are often the ones enforcing these psychometric tests on candidates have you ever thought about what these tests can do for you?

Benefits of Taking a Psychometric Tests:

As noted above, there are multitude of psychometric tests out there to cater to what you want to understand about yourself. It can even be as specific as how you would perform in the workplace.

For example, the Traits Leadership Evaluation (TLE) tells you how adept you are on 10 different leadership traits, allowing you to see your strengths and weaknesses at the workplace. The results show you your competency on each trait and based on where you stand will give you guidance using action steps to improve on that trait.

For example, after doing the TLE test, I found that I scored 6 out of 10 on the trait, “Coaching and Developing People”. After describing in a few sentences what were my strengths and weaknesses in this area, TLE provided me with a few recommended actions tailored to my results. It advised me to look at certain situations where I’ve had to coach someone else and focus on understanding my preferred behavioural style and what changes I could make to help myself improve. I found the advice given extremely helpful when I started working on being more assertive at the workplace.

Thus, psychometric tests could also be used to help you become a better leader, allowing you to achieve your work goals. Taking a niche psychometric test like this with the purpose of improving as a leader will make you seem proactive to potential employers. They will see you as determined and someone who takes their career seriously.

2) Gain Understanding of Yourself

Self-reflection may not come naturally to everyone. For young adults entering the workforce, they might  find themselves in this predicament. Taking a psychometric assessment that aims to measure their personality will greatly assist in discovering their values and traits. It could be a great journey of self-development for someone to think deeply about who they are and who they want to be.

The Myers-Briggs Type Indicator (MBTI) is a great illustration of the above. The results from this test allows you to gain insight about yourself in many different departments. It gives you a general list of your strengths and weaknesses but also how you are in your relationships with friends and romantic partners. It even suggests careers suited to your personality! From my own experience, I found this test eerily creepy and spot on enabling me to realise certain traits that I possessed.

Even though you may associate psychometric tests with job seeking, which may be dreadful, do try to look beyond those uses and realise these tests can help you grow in so many areas in your life.

Now that you’ve gained some insight as to who you are, it would be easier to match make yourself to a job suited for you. Ideally, a job candidate should want to have aligned goals and values with their potential employer, right? You don’t want to end up working at a job that makes you miserable. The Great Resignation is a perfect example of how people are starting to rethink their roles in their company. This only hammers in on the fact that when offered the choice, people would prefer working in a role that aligns with their personal values.

Take this as a learning lesson on the importance of having aligned values with your future company. When others felt that they could finally take the opportunity to do so, they did. Thus, find a psychometric test that helps you understand what values are a priority to you and in the process of applying to different jobs, do some heavy research on the company and the values they practice. Check out websites like Glassdoor that allows you to search up reviews by other previous employees of a company. 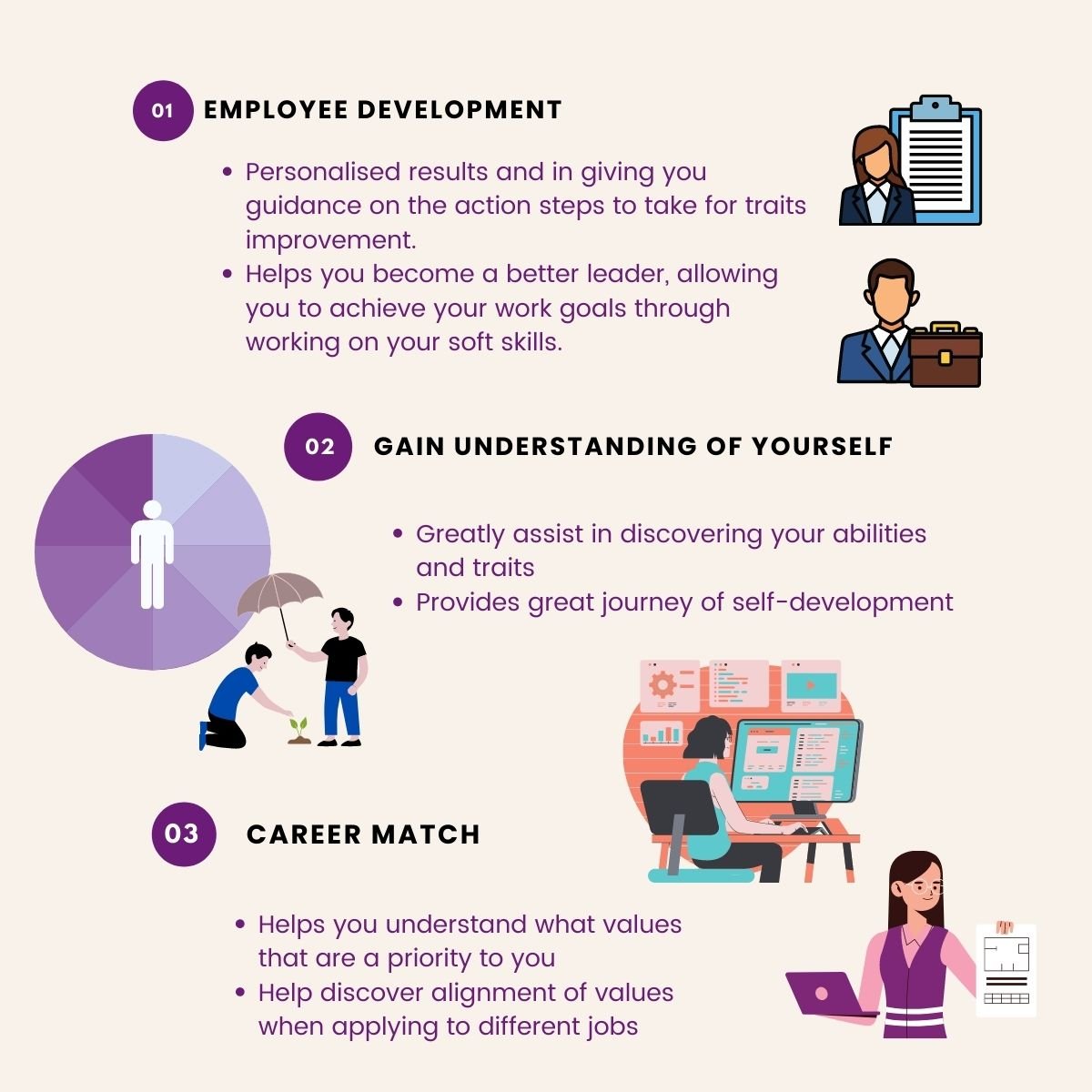 Infographic by Leaderonomics: Benefits of taking a Psychometric Test

As a concluding statement, I urge you to think of psychometric assessments differently to how you may have originally perceived them.

Only when you know what your strengths are then can you only deliver the most at your job. Whilst work is important, it is not your end all or be all. Humans are a work in progress and we are always striving to be better.

Did you find this article interesting? If you'd like to grow more in your career and for your own self-development, check out Necole. Necole is an Artificial Intelligence (AI) powered learning app that that curates personalised learning just for you. Watch this video! 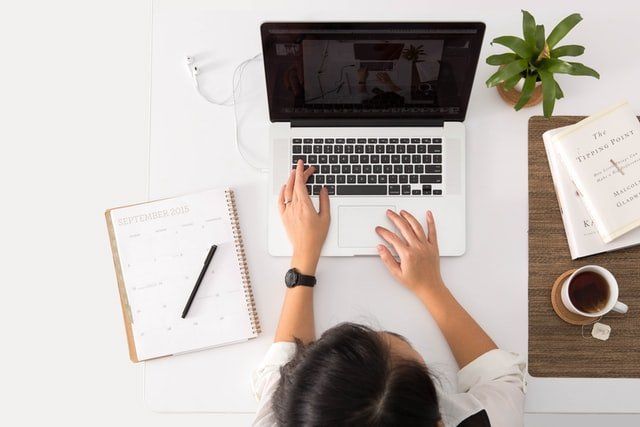 How Digital Learning Benefits Your Organisation

Nadine Lim
Nadine is a compassionate and determined young woman who enjoys her time exploring her creative side. She thrives on building meaningful relationships through taking an interest in insightful conversations with the people she meets. Whilst in her last semester of university as a psychology student she is undertaking her internship with the editorial team in Leaderonomics, taking time to dabble in different fields before pursuing a Masters in psychology.