Daddy’s Day Tribute: How Deep This Father’s Love For His Son 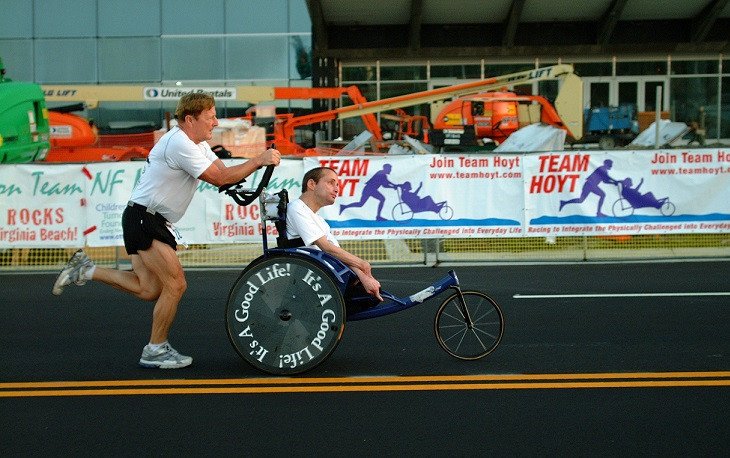 In honour of all fathers this Father’s Day, we caught up via email with Dick, 76, and Rick Hoyt, 54, who make up Team Hoyt,

a father-son duo who have advocated for people living with disabilities. They have encouraged the “Yes You Can” belief through their participation in numerous athletic events around the world close to four decades now.

What makes Team Hoyt more unique and compelling is that Rick was born in 1962 as a spastic quadriplegic with cerebral palsy and mute. Despite the disabilities, Rick’s mind and spirit have always been strong.

His family overcame various roadblocks (and the naysayers!) to support his quest for independence and inclusion in community, sports, education and the workplace.

This is an extraordinary story of a father’s love that surpasses all human understanding and has inspired many to do the same when faced with similar predicaments or life’s challenges. Here’s a Q&A session between Leaderonomics and Team Hoyt. 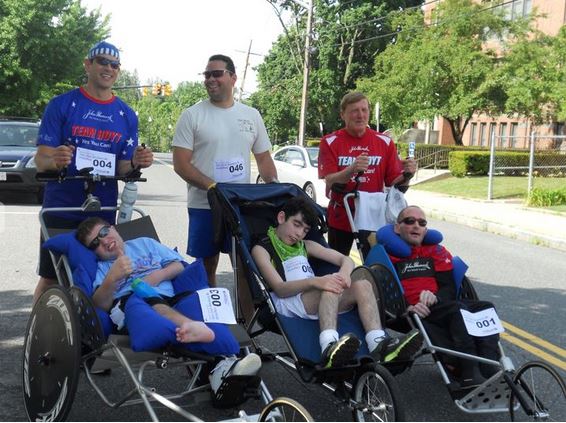 1. How has the journey been so far?

When Rick was born, the doctors concluded that he would be nothing but a vegetable all of his life. We went against the doctors’ advice to institutionalise him. We brought Rick home instead and brought him up like any other child, like his two younger brothers.

Our message is “yes you can”. There isn’t anything you can’t do, as long as you make up your mind to do it. In our Hoyt dictionary, there’s no such word as “can’t”.

2. Was there a time when you feel like giving up? What has kept you going?

We have never thought about that. Rick inspires me – he gives me inner strength to persevere and press on. He is a courageous fighter and he will never give up, ever.

3. What were some of the obstacles you had to go through?

We were also told Rick could not compete in marathons and triathlons with me. As before, we persevered and finally convinced the race directors to allow us to compete.

Over the years, we paved the way for other duos around the country and the world. To date, we have competed in over 1,130 race events, including 32 Boston marathons, and six Ironma

4. Share with us the people who came alongside you in this journey.

When Rick and I first started running, no one wanted to run with us. Another runner, Peter Wisnewski was the first person to reach out to us, and start running with us and talking with us, before and after the local races.

Rick and Peter used to have a friendly competition – whoever lost the race would have to pin the winner’s bib number in their bedroom until the next race.

Our church was also very supportive. Our local Easter Seals Disabilty Services of Massachusetts also encouraged us, and still supports us today.

5. Your most memorable moment.

I recall the time when we had to leave Rick at the Boston University campus and make the two-hour drive home. We have to leave him with care attendants (who were college kids) that we just met. We were worried about how he would handle living on his own. In hindsight, he did well and loved his independence from mum and dad.

It took Rick nine years to graduate from college, as he could only handle a few subjects per semester. Two years ago, his college gave him the distinguished graduate award.

6. How have your experiences changed you?

I feel all my experiences have made me a better person and a better father. I will continue to motivate and inspire other families as long as I can.

7. What do you think your life purpose is?

My purpose in life is to be the best person that I can be for everyone, because there is so much greed in this world. A case in point, our government used to be for the people, but I feel that now the people in our government have placed themselves first.

8. Your advice to those who may be in the same predicament or facing other challenges at home.

My advice to families who have differently-abled children is to give them our message of “yes you can”.

There is nothing your child can’t do as long as you encourage them along the way. They might just do it differently from other children.

I hope to continue to grow Team Hoyt around the world. Right now, we have Team Hoyt organisations in Massachusetts, Virginia, Arizona, Texas, Idaho, California, and Ontario, Canada. These organisations are matching up able-bodied runners to athletes in chairs, and doing local races and triathlons with them.

They are carrying Team Hoyt’s torch and legacy.

Rick, I love you. Don’t ever change who you are. You inspire and motivate the world. You were placed on this earth for a special reason. 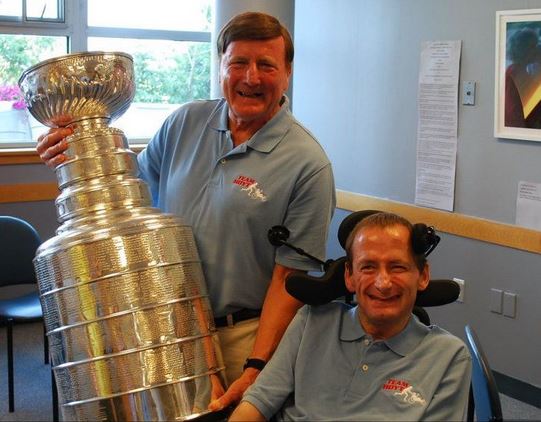 1. Despite your physical limitations, what has kept you going?

I love to compete. I absolutely love the atmosphere from everyone at all the races. I am also happy to know that I still inspire others to run or have someone push them because many people look up to us.

With our motto “yes you can”, you can accomplish anything.

2. Your most memorable moment.

It was when I received my Bachelor of Science in special education, and having my family there getting my certificate.

3. What would you like to say to your dad?

My dad means a lot to me because he was always pushing me in races and he has never said no. I’d like to express my utmost thanks to dad for being there for me and pushing me in our very first race.

4. What would you like to say to those who feel hopeless in life?

Never give up. When people say “no”, always remember we always say, “Yes, you can”.

I still love and hope to continue racing, now that I have a great new “set of legs” who also believe in the inspirational motto of “yes you can”. 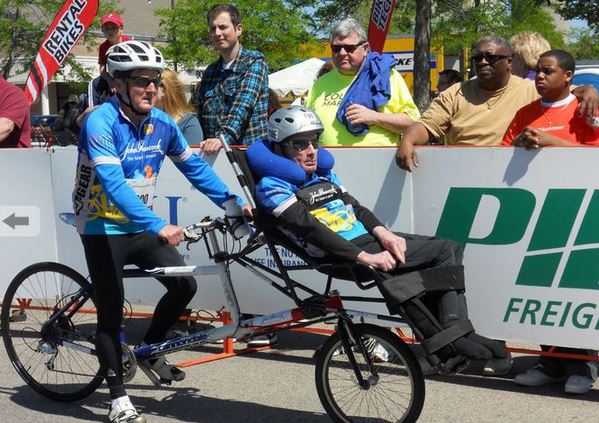 Getting ready to bike in the Best Buddies Bike Ride in Boston, June 2010

We all know this saying very well, “Two are better than one.”

Why is that? If either one falls, one can help the other up. That is the basic building block of teamwork, or as Liverpool Football Club’s anthem song sums it best, You’ll Never Walk Alone by Gerry & The Pacemakers.

If I may add, when a team is built on a foundation of unconditional love, it becomes an unshakeable entity which is not easily overpowered by discouragement and discord, as we can see from the inspiring story of Dick and Rick Hoyt.

To know more about the story and cause behind Team Hoyt, visit www.teamhoyt.com. Leaderonomics wishes all fathers a truly Blessed Father’s Day! If you have similar stories of a father’s love that knows no bounds, share with us at editor@leaderonomics.com. We love to hear from you. If you have anything to say to your dads this special day, vice versa, leave your comments at the end of the story.