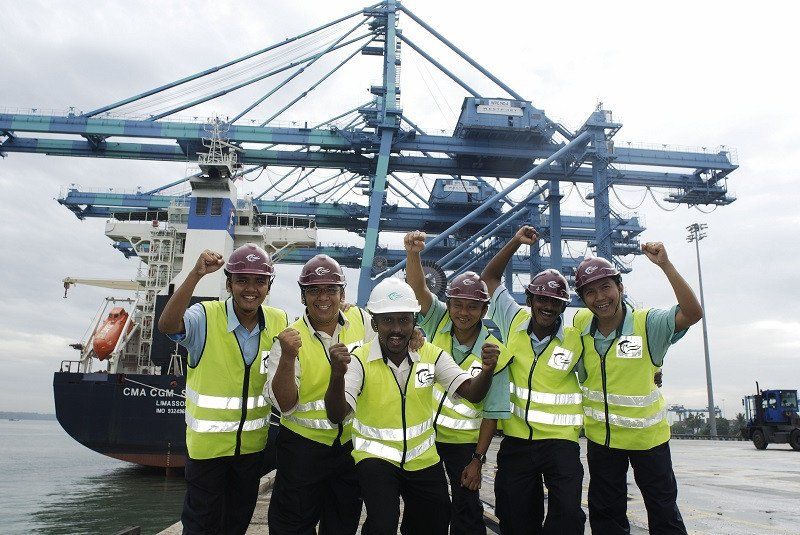 Over 22 years ago, Tan Sri G. Gnanalingam set foot on Pulau Indah, a simple island with no infrastructure. However, being the visionary that he is, he saw great potential for growth.

He embarked on a journey towards transforming the island into Port Klang’s second multipurpose terminal. This is a testament to Gnanalingam’s vision and his capacity not just for greatness in himself but also in bringing out the greatness of others.

Westports was officially opened in September 1996. Within three years, Westports had lifted its one millionth twenty-foot equivalent unit (TEU). In 2003, this mighty group broke two world records in terms of efficiency and productivity.

The first was on March 17, with a 342 moves per hour (MPH) feat followed by a record breaking 368 MPH on MV Peninsular Bay of CMA-CGM. Did the company slow down? No. It smashed this record again in February 2006 when it set a new world record of 421 moves per hour on MV Rossini.

In January 2013, Westports celebrated its 50 millionth TEU with the then Transport Minister Tan Sri Kong Cho Ha in attendance.

That same year, Westports reached one of its greatest milestones, when it commenced its prospectus for the listing on Bursa Malaysia – launched by Prime Minister Datuk Seri Najib Tun Razak.

It listed on Bursa to a strong acceptance by the investing fraternity and three years on, Westports’ shares continued to trade well above the listing price. And to think it all started with a vision for what could be and the acute awareness of untapped potential.

What is a great team without strong, purposeful guidance of a great coach? For the most part, it’s people with a lot of talent and potential, with little direction and accountability. But for Westportians, Gnanalingam is the man. 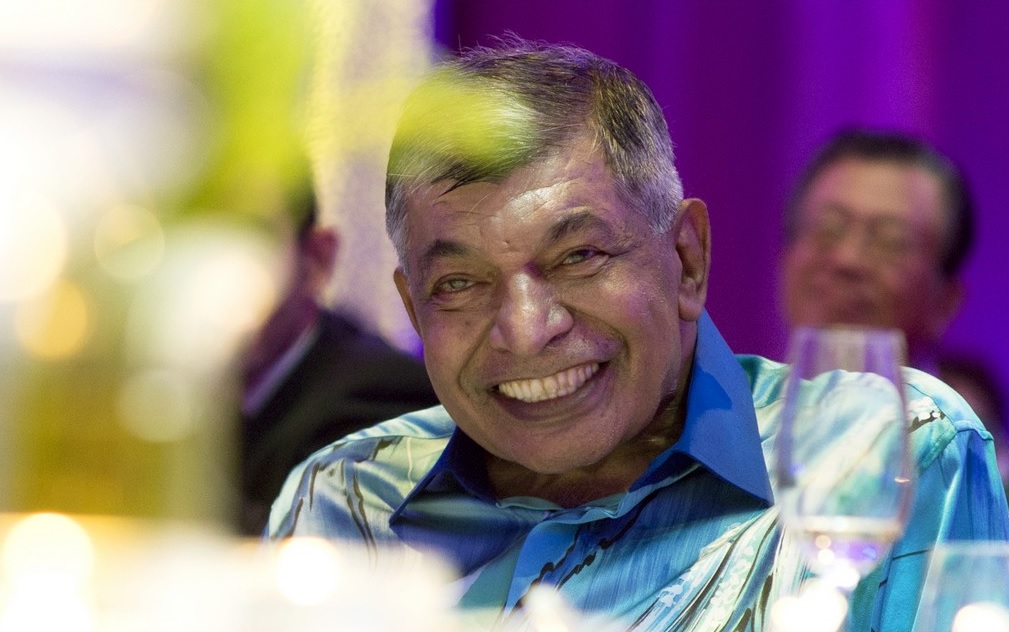 “A good coach would be able to acknowledge the strengths of each player and leverage on them to achieve a common objective, which is to score and win the match. At the same time, the coach must also be able to find a comprehensive balance in the team.

The team cannot only be strong in attacking, but also excel in defending the goal. This is what Westports has been practising all these years in building a strong yet balanced team. We recognise the strengths and weaknesses of our staff, and find a way to synchronise them,” says Gnanalingam.

A lover of footie, he likens Westports to a champion football team. Why?

Just as a football team is made up of members who serve different roles and possess unique qualities, so does Westports. The company’s talents are encouraged to grow and reveal themselves as management leverages on the strength of its people.

Whether a person is a fierce “striker” or a quick-footed “midfielder”, Westports prepares its team to be ready for anything by training the players to go out of their comfort zones.

“Coach” Gnanalingam also believes his team has been given a sense of purpose as citizens of Malaysia. The Westportians are acutely aware of the important role they play in Malaysia’s economic and trade growth.

That is why training programmes and seminars are common tools employed to upgrade the team’s technical knowledge and skills. This also serves to push up personal and collective productivity. It is this dedication to excellence as a team that has led to record-setting feats of greatness.

Ultimately, Gnanalingam believes cultivating the right attitude is what sets Westports a cut above. An attitude rooted in teamwork and a shared vision for Westports – accomplishing the Westportian mission together. 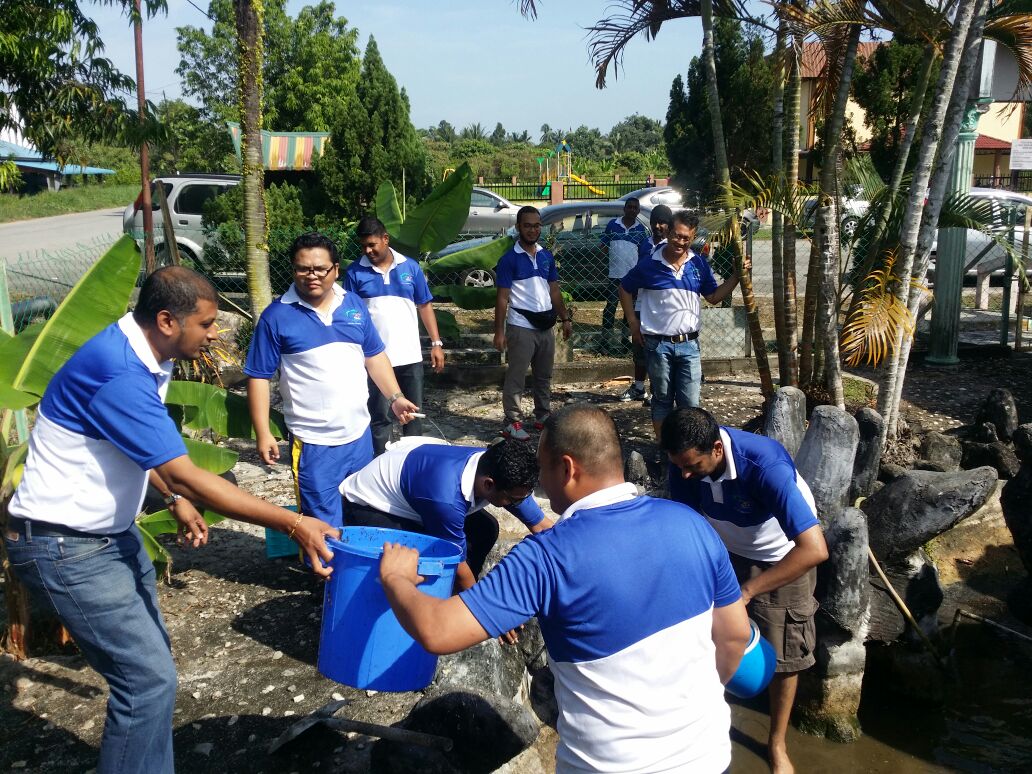 Westports staff working as a team for the Corporate Social Responsibility programme.

Teamwork is key to efficiency

Efficiency is everything in the port industry because without it, shippers waste money no matter how low the tariffs are. Westports has gone over and above to be a very efficient port with almost 1.5 times more gross moves per hour than the industry average.

This drive for efficiency and greatness does not merely spring into existence of its own accord. It’s a valuable seed that has been planted and cultivated with each member of the team.

Gnanalingam shared that Westportians understand the value of time as a cornerstone of Westports’ greatness. There is a back-and-forth of respect and understanding of timeliness between the team and management that allows every member to grow and be his or her best self. 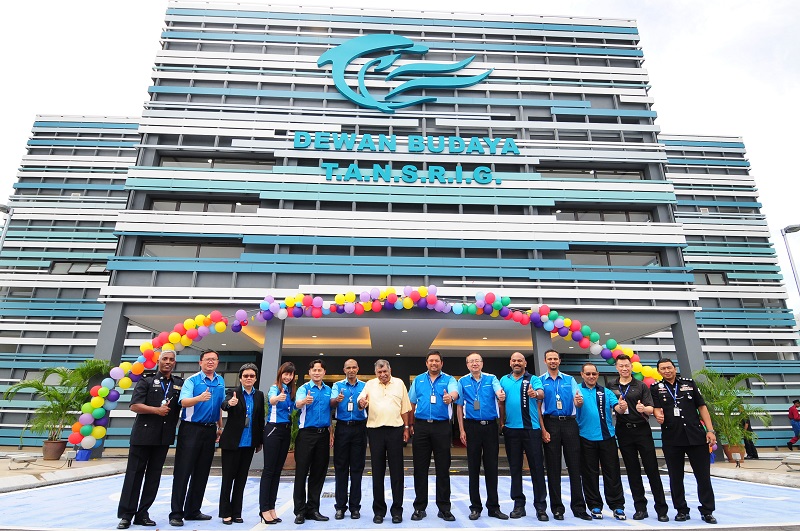 We all bring different things to the field – talents and skills that make us good at different roles. Athletes often say they believe talent wins games, but teamwork wins championships.

Westports has worked to be good and then worked hard together to be the best. Teamwork has driven management and all Westportians to play on each other’s strengths and to keep striving for the next big win.

Moreover, people thrive when they are being championed. Gnanalingam has coached his management team to bring out the best in Westportians as individuals and as a team.

He believes in a popular saying that “coaching, is to take a player where he cannot take himself” and Westport’s scoreboard is proof that it has done exactly that.

On the right trajectory to greatness

Company culture is of utmost importance and must be berthed in the hearts of the people and the organisation. Westports has created seven tenets that everyone in the team works in accordance with to build the perfect culture for greatness and success. Westportians candidly share what the tenets mean to them with respect to their roles at Westports. 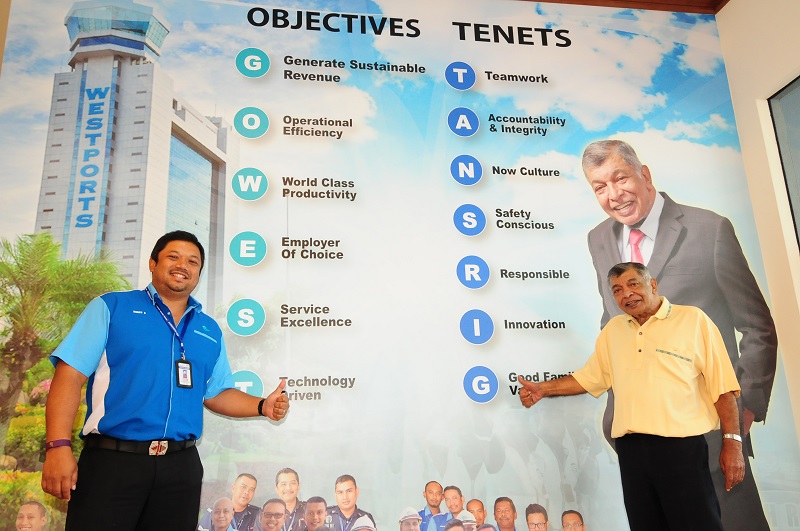 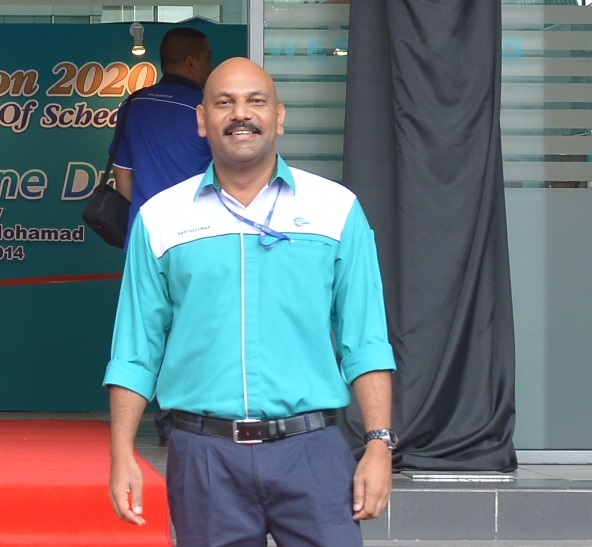 “At Westports, we encourage transparent communication by creating room for staff to share feedback, give opinions and air their grouses in a civilised manner. As a head of department, feedback and opinions from the team are invaluable to planning and executing our departmental strategies better. We foster bonds through team building exercises and activities. These team building exercises ingrain a sense of trust and togetherness among the team, which is reflected in their daily duties. Additionally, assignments are fairly delegated to ensure no one is overburdened, while leveraging on their key roles and skills to produce great results.” — M. Nanthakumar – Head of department, container operation

ACCOUNTABILITY AND INTEGRITY: The bedrock of excellence

“Integrity is the bedrock on which trust is built and is the hidden key to success. Employees are embedded with a deep feeling of trust and integrity which provides transparency and positive work environment.”
—Westports Seven Tenets

“Time is something that man cannot have enough of. We feel like we have all the time in the world, but in reality, we don’t. We might think that if we could get things done in a week, we are being efficient, but the guy next door can do it in less than two days. So at the end of the day, in a business context, a customer would go to someone who could solve his or her problems efficiently, correctly, in a timely manner. If we could get things done now, why wait for tomorrow? It is about staying focused on the task at hand and committed in delivering customers’ desired results. We share that sense of urgency.” —Tan Sri G. Gnanalingam 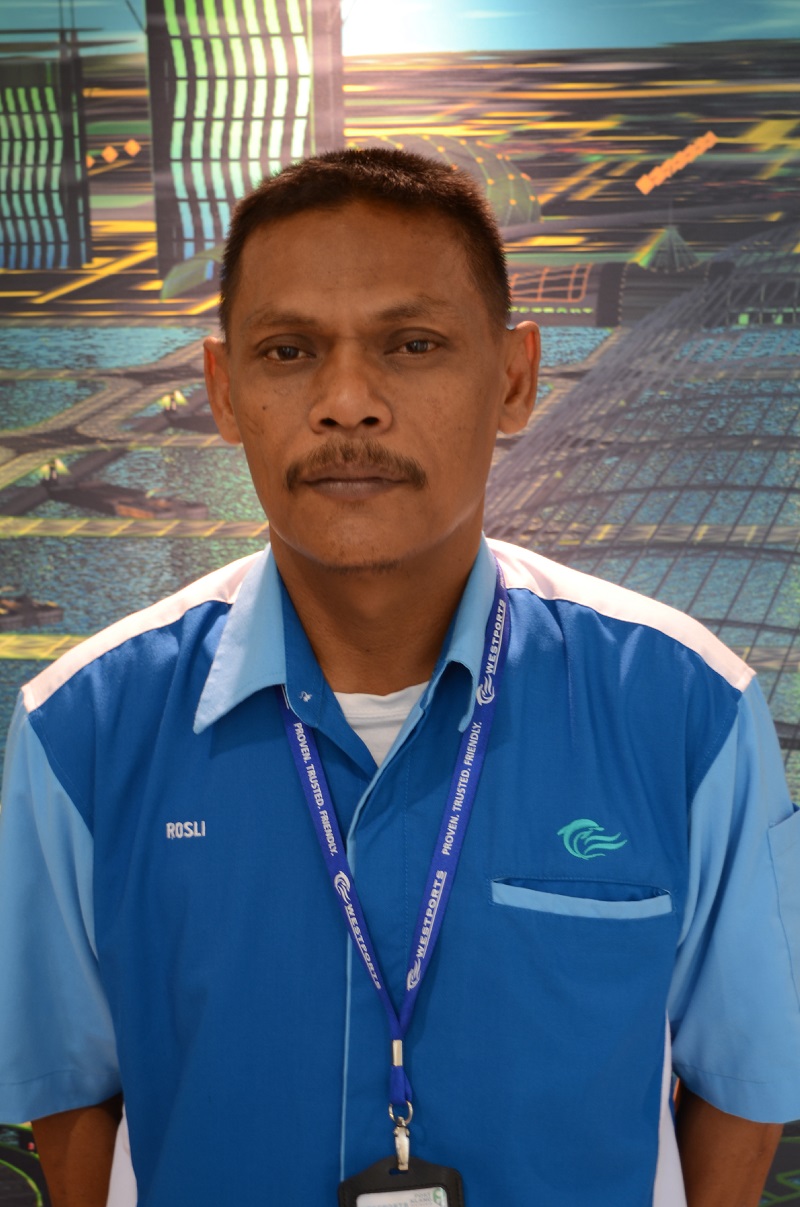 “As a QC operator, safety awareness is very important, because working with a quay crane is very dangerous as we are working at a high altitude. Any mistake can be a hazard to myself, as well as to other port operators. Therefore, I must be responsible for my own safety, as well as the safety of other people in the port while on the job. I follow all safety regulations and instructions to ensure that my job can be carried out properly and safely. I also am dedicated to performing my duties with full responsibility to ensure that all operations and the company’s goals are achieved.” —Rosli Kamaruddin – QC Operator 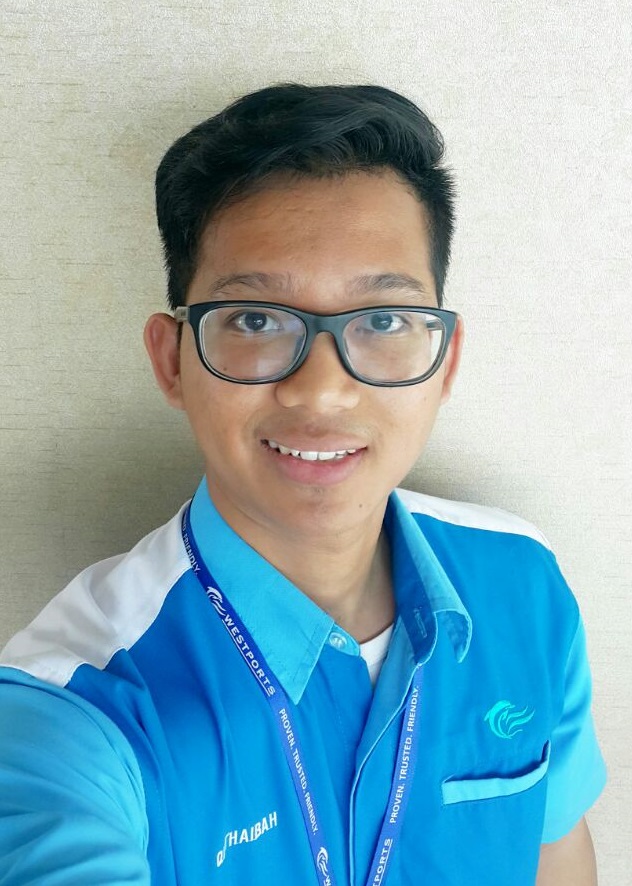 “The nature of my job requires me to work in proximity with haulage movements at the container gate. This dangerous situation requires my full concentration and understanding my responsibility to myself and colleagues in terms of practising safety precautions.

As a leader, I need to ensure that my co-workers on the ground wear safety attire and follow the standard operating procedures all the time, especially during our night shifts, as safety is our main priority during operations. Good communication is important to staying responsible and safe in our daily operations.”
—Muhammad Quthaibah Ahmad Yani – Logistic executive

INNOVATION: A Passion for excellence and success

“Westports is a fully system-oriented company and most processes are developed in-house through brainstorming sessions and team input.
We encourage staff to share new and innovative ideas that can improve our work processes and standard operating procedures irrespective of their positions.

To screen and deliberate the suggestions made by the staff, we form Task Force teams, which look into refining our work processes based on these suggestions. Also, every year, we hold a Project Innovation competition to encourage Westportians to think outside the box and to ramp up the processes.”
—M. Nanthakumar – Head of
department, container operation

“In Westports, there is no Malay, Chinese, Indian, orang asli and such. We are all within the same family, live by the same values, and strictly adhere to our non-discriminatory policy. Anyone can be who he or she wants to be at Westports, as long as his or her conduct is within the company’s policy. Most of the time, the management strives to accommodate the different needs of the workers. For example, we have a mosque within our complex that conducts Friday prayers for our Muslim brothers to perform their religious obligation. All major festivities are celebrated with rigour to ensure a sense of togetherness among the staff, regardless of race or religion.”
—Tan Sri G. Gnanalingam

> Westports is connected to more than 350 ports around the world by main line operators.

> Thirty-five gross moves per hour, which is higher than the industry’s average of 25.

> A total of 793 containers moved in one hour on the container ship, CSCL Le Havre, with the deployment on nine twin-life cranes. This set a 2014 world record.

> In 2015, Westports handled 10.2 million tonnes of bulk cargo. This is a 57% market share of convention cargo handled in Port Klang.

> As one of the best workforce in the industry, Westports’ positive employee relations has led to strong employee loyalty. Seventeen per cent of Westportians have been with the company for over 14 years.

> Westports’ handling capacity increased to 11 million twenty-foot equivalent units (TEUs), with the completion of the first phase of Container Terminal eight. The company will be expanding next year to 15 million TEUs per year.

“I always tell myself that I am not the only reason why Westports is as successful as it is today. Winning teams like Manchester United and Arsenal aren’t built by one man, neither are their games won by an individual. Championships won on the backs of members of the Red Devils and the Gunners were trained hard, guided and pushed by dedicated, perceptive coaches. The top management understands this; it is the contribution of each and every member of the Westports family that has made the company what it is today. Teamwork, Accountability and Integrity, the Now culture, Safety Awareness, Responsibility and Innovation are the values that have made Westports the successful port operator it is today.”
—Tan Sri G. Gnanalingam on The Seven Tenets at Westports 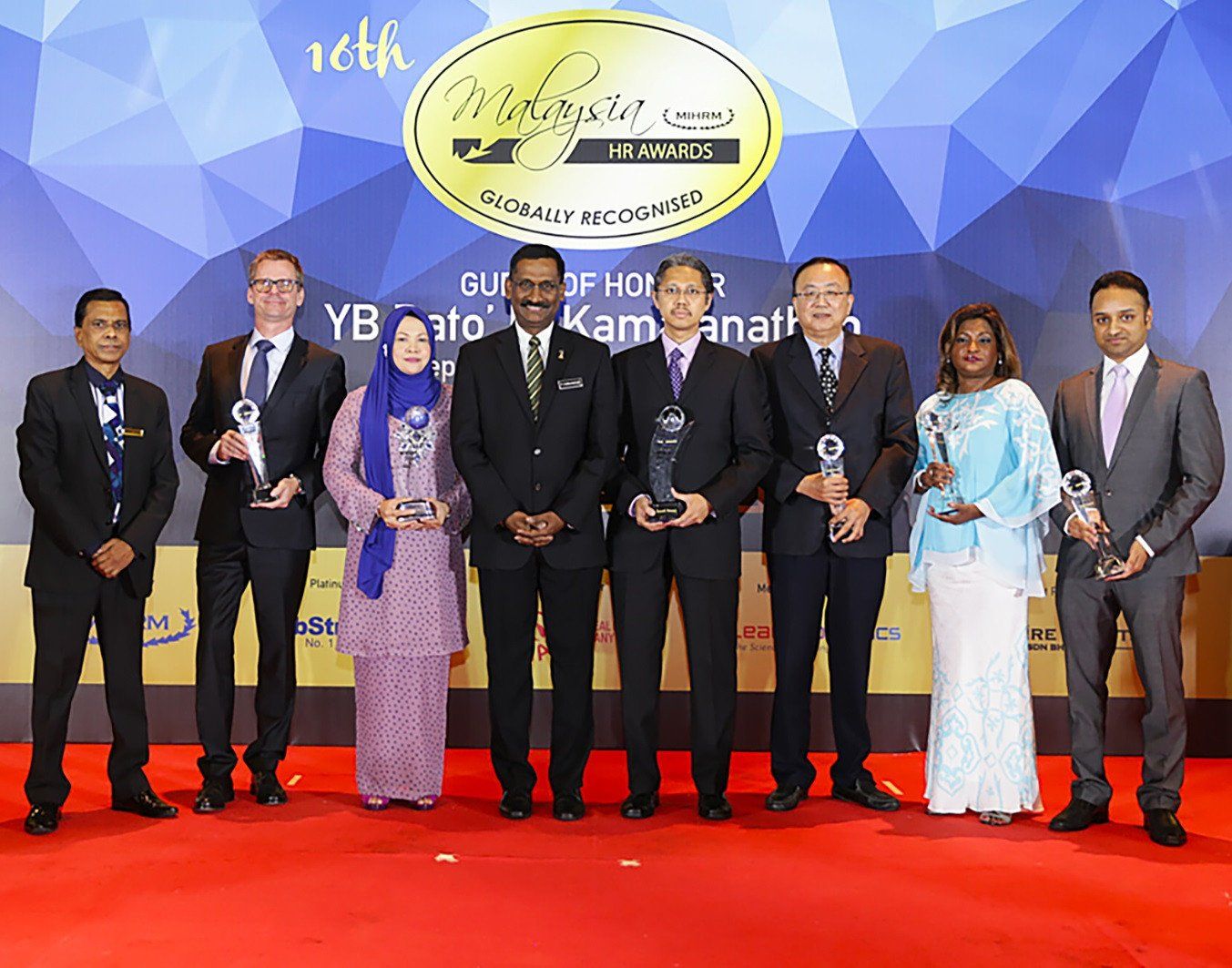