“Leadership Doesn’t Make A Difference, It Makes The Difference.” 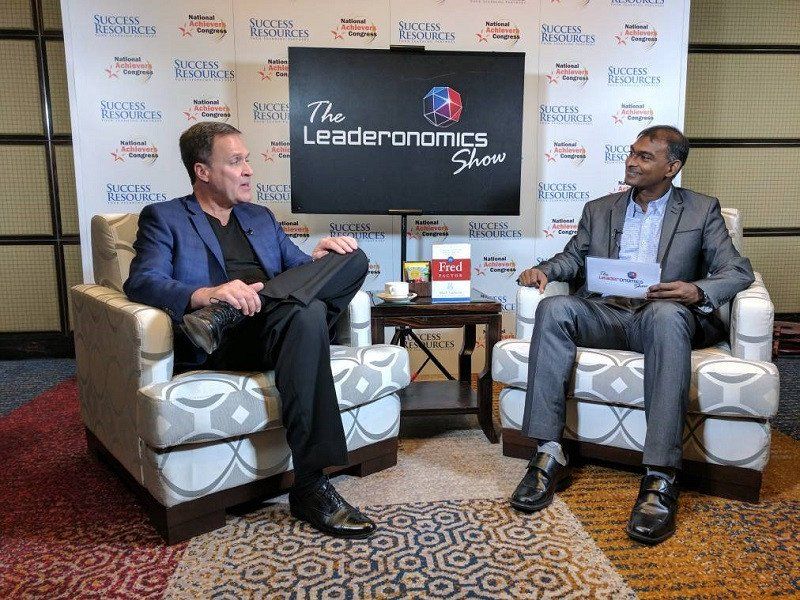 That is the assertion that drives business educator and international bestselling author Mark Sanborn’s passion for helping others.

The noted expert in leadership is president of Sanborn & Associates, Inc – an idea studio dedicated to developing leaders in business and in life – and he has worked with over 2,600 clients in a career spanning over 30 years in transformational coaching.

The Leaderonomics Show host Roshan Thiran caught up with Sanborn recently during the National Achievers Congress 2017 by Success Resources to learn more about his leadership journey thus far.

His message to everyone he meets, who looks to realise their potential, is straightforward and simple: being extraordinary and exceptional is a choice.

The American educator began his professional speaking career at the age of 19 as a means to work his way through college as an after dinner speaker.

In these early days, he would often relay insights from motivational speakers such as Zig Ziglar and Robert Schuller, but soon realised he would have to create his own insights if he was to make a name for himself.

We emulate to learn, but innovate to earn, says Sanborn.

Appearing for the first time on The Leaderonomics Show, he related the story of how his first speaking contest at the age of 10 went badly.

Rather than allow the pain of failure to beat him, he used it as an inspirational force to set a goal of winning a state speaking competition. Later, he would surpass his ambition and go on to win a national contest.

“Whether it’s politics or in the community, the way you influence others really matters – it makes the difference for an organisation, community, or nation.”

The best-selling author of The Fred Factor insists that anyone can be exceptional, and demonstrates through the story of real-life mailman Fred Shea that, no matter what we do in our professional lives, excellence can always be achieved.

Fred’s inspirational service to others led Sanborn to write about his mailman’s story, from which he gleaned four core principles for success that benefit organisations as well as individuals. The four principles are:

In Sanborn’s experience, being exceptional is a choice because every single person who is exceptional is so because they had the intention to get better at what they do every day.

It’s a choice, he says, to invest in yourself and prevent yourself from being stuck in a rut and doing the bare minimum needed to get by.

This might interest you:How Leaders Convert Compliance Into Commitment

“The only thing that gets better accidentally with age is wine,” he says.

Q: Would you accept advice from a younger person?
A: Not only would I accept it, I would seek it because they have a different perspective, and that would be very helpful.

Q: Do you think it’s alright to always give but not receive anything in return?
A: I think when you give you do receive in return, even if you’re not recognised for it you have the satisfaction of doing the right thing. So I think it’s impossible to truly give and not receive.

Q: Researchers say that you can be an expert at anything if you practise for 10,000 hours. Do you agree?
A: I agree if the practice is deliberate. You’ve got to have intentionality, feedback and challenge or else the practice isn’t going to pay off.

Raise Your Game: Character — Building The Right Foundations In The Leaders Of Tomorrow