Who Packs Your Parachute? 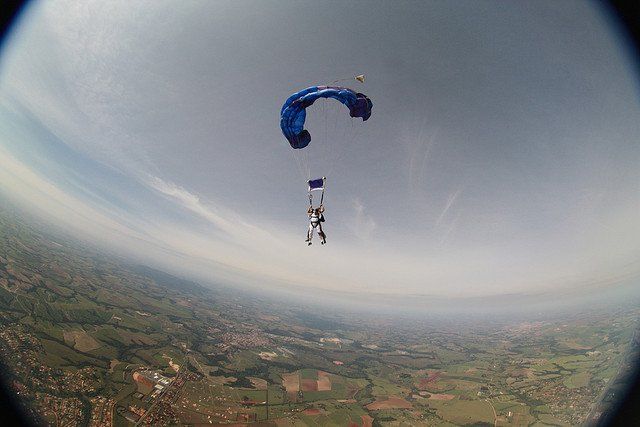 Gratitude for each member of your team critical for success

In 2011, I read about the ordeal of US Navy jet pilot Charles Plumb, whose plane was destroyed by a surface-to-air missile on his 75th combat mission. He parachuted out but was captured and spent six years in a communist Vietnamese prison. He somehow survived the nightmare and now teaches leadership!

Years later, when Plumb was at a restaurant, a man came up and said,

“You’re Charles Plumb! You flew jet fighters in Vietnam from the aircraft carrier Kitty Hawk. You were shot down!

“How in the world did you know that?” questioned Plumb.

“I packed your parachute,” the man replied.

Plumb was taken aback by this man. The man looked at him and said smilingly, “I guess it worked!” Plumb quickly responded, “It sure did. If your chute hadn’t worked, I wouldn’t be here today.”

Charles Plumb couldn’t sleep that night as he thought about the man who possibly saved his life. He wondered if he had been nice to him when they were in the army.

He was a fighter pilot whilst that man was just an ordinary sailor so in most likelihood, he would not have thought much of the lowly sailor back then.

Plumb thought of the many hours the sailor must have spent in the bowels of the ship, carefully entwining the shrouds and compacting the silks of each chute, holding in his hands the destiny of someone he didn’t know. And he was thankful that he had someone in his team who packed his parachute so well that it worked.

This led me to ask myself, “who’s packing my parachute?” Each day, there are numerous challenges in business and in life where we need the help and support of so many people to ensure that our “parachute” works when a pivotal moment arrives.

These “parachute packing” may include ensuring our powerpoint slides are perfect, or our proposals to a major customer is beautifully bound or just ensuring our products work each time.

Everyone is highly reliant on people in our teams to provide what we need to make it through the day. There is simply too much involved in running a business today to think you can do everything yourself. Yet, many of us never really think about our teams that support us or even show thankfulness to the different people that “pack our parachutes” daily.

Richard Branson loves people and every part of his leadership is about people.

Listen to this: Raise Your Game: Leadership Lessons From Richard Branson

“The people factor is the basis of many entrepreneurial successes and, because many business leaders discount it, innumerable failures results.”

Branson takes it a step further. The entire business model of his Virgin Group is centred on people. Branson built Virgin to become one of the biggest brands in the world simply by listening and caring for people. Early in life, he started his Student magazine because he felt that the big newspapers didn’t care for students. He set up Virgin Records because he felt that big record labels didn’t care for young people and their music as they charged exorbitant prices. He did the opposite and cared.

He set up Virgin Atlantic because he was upset that people had such horrible service in flights and he cared enough to change it. He claims, “having a personality of caring about people is important. You can’t be a good leader unless you generally like people. That is how you bring out the best in them.”

This went on for months before Branson realise what was going on. Branson sued BA, who settled the case, giving £500,000 to Branson and a further £110,000 to Virgin and another £3 million in legal fees.

What did Branson do with the money he won? He divided his compensation (calling it the “BA bonus”) among his staff and made sure everyone benefited from the “win” as a thank you for fighting hard for Virgin. How many leaders today are like Branson, sharing their ‘limelight’ with the team?

Branson has developed a level of trust with his team by showing gratitude. Branson knows “who packs his parachutes” and makes time to acknowledge and recognise his employees.

He shares that the secret to ensuring you continually show gratitude to your employees is by being a good listener, lavishing praise to your “parachute packers” for a job well done constantly and never openly criticising people.

He adds, “To be a good leader, you’ve got to concentrate on bringing out the best in your people. People are no different than flowers – they need to be cared for and watered all the time if not they will shrivel and die. This is true whether it’s a switchboard operator or the chairman.”

This might interest you: Diaval: The Little Black Raven With A Big Pure Heart

Care for your parachute packers

Do you really care about the people that ‘pack your parachute’? Or do you only care to the extent that they deliver on the workload entrusted to them. Employees aren’t just resources working in the business; they are the business.

An effective business is not the product, service, supply chain or its magnificent business plan. It ultimately boils down to the group of enthusiastic and passionate people called employees who carry out your well-designed business plan.

Jose Mourinho, one of the most successful coaches in the world clearly believes that all jobs are important. While coach at Chelsea, he treated the cleaning lady with the same respect and gratitude as he did Didier Drogba, their star player. If one person was ineffective in their role, the whole team suffered and he would ‘lose’. He thus ensures everyone on his team showed gratitude to everyone in the “family” regardless of their rank or position.

As a leader, I am indebted and extremely grateful for the people I have the honor to work with daily. So how can I show my gratefulness?

Simply say “thank you.” Treat your people with respect and acknowledge their commitment and contribution throughout the year. Many of us say thanks once a year, probably at annual dinners. Research shows that for it to be effective, you need to say it often.

“If you don’t do it regularly you’re not going to get the benefits,” says Professor Lyubomirsky, “it’s like you went to the gym once a year. What would be the good of that?”

But as work piles up and deadlines looms, and it is easy to slip into barking mode. It is times like this when I remember a simple rule: Treat your people as if they were volunteers.

I know for a fact that the great people who work at Leaderonomics, especially the high-performers, can leave at any time. Their skills and expertise are in demand. So, it’s not just about paying a competitive salary but also ensuring they know they are valued. In our community work, the opposite holds true and you need to “treat your volunteers as if they are employees.” In many NGOs, volunteers are essential but are often overlooked when important decisions are made, causing feelings of being unappreciated and dissed.

The key lesson for us is to continually remind ourselves that everyone should be accorded respect and recognised for the contributions they make.

Research on gratitude indicates enormous benefits including health and happiness to the giver and optimism and energy to the receiver. Additionally, psychologist Dr. Robert Emmons concludes that those who offer gratitude are less envious and resentful, sleeping longer, exercise more and report a drop in blood pressure.

Psychologist David DeSteno found that “gratitude leads people to act in virtuous or more selfless ways.” This means that if you constantly show your gratefulness to the people that ‘pack your parachutes’, they in turn will be inspired to give more of themselves selflessly to your cause.

There are myriads of ways to show your thanks. The key is that you take the time to do so. It’s easy to forget. 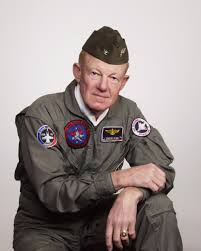 (Above: Charles Plumb survived because someone packed his parachute right. Are you grateful to the people “packing your parachutes” daily?)

Henry Ford was named Fortune’s ‘Businessman of the 20th century’. Ford was obsessed at helping people by ensuring that even the ‘poor’ could afford cars. He ultimately succeeded by reducing the price of a car to an affordable $950 per car (the cheapest in the world).

While most people who sell ‘cheap’ products will try to cut costs, especially wages, Henry Ford did the opposite—he rewarded his employees by paying them the highest wages in the country.  Everyone wanted to work at Ford. He went one step further.

To truly thank his employees and show gratefulness, he cut their working hours from the typical 9-10 hour workday (back then) to 8 hours per day. So you got paid more and worked less.

When you thank employees, their confidence grows. Looking back, different leaders probably inspired and spurred you forward through encouragement and gratitude. You need to do likewise. Best of all, leaders who are grateful are never depressed. You can’t be depressed and grateful at the same time.

Thankfulness is infectious. When you brighten someone else’s day with a word of thanks, it puts a smile on their face. Starbucks CEO Howard Schultz built his empire on this infectiousness. Starbucks was set up because Schultz father was mistreated by his employer and he wanted to build a company that cared for every single employee, even part-timers that worked there.

His philosophy was “Care more than others think wise.” His employees similarly got infected by his caring and positivity and either intentionally or unconsciously, started passing it back to their customers. Starbucks grew as a result.

Is there someone in your team you owe a debt of gratitude to? Build an attitude of acknowledging and valuing the contribution of others. People are the lifeblood of any company. They need to be thanked and celebrated every now and then.

So, go say thank you to your troopers today. You would be surprised at what those two little words do for a person. Go on, be a thankful leader!

Watch this “Be a Leader” episode based on this article. Click on video to watch.

Roshan Thiran is CEO of Leaderonomics, a social enterprise passionate about developing grateful leaders across the globe through its action-learning based approach to learning. Leaderonomics programmes are highly regarded and effective in developing world-class leaders. To engage Leaderonomics for your organisation’s leadership development, email people@leaderonomics.com 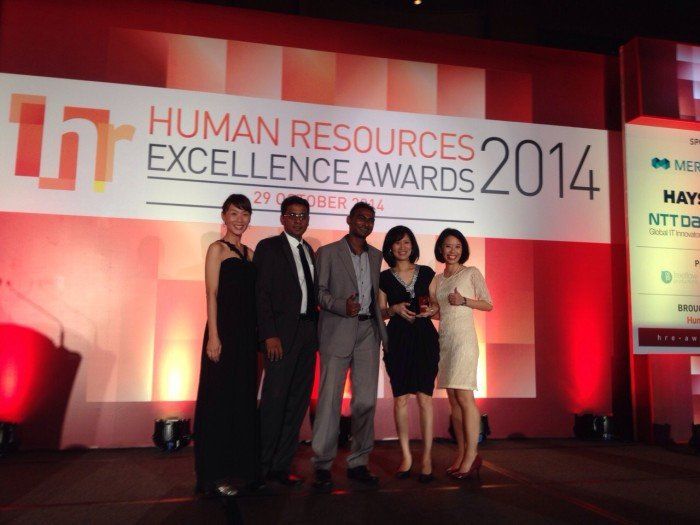 HR Excellence Awards 2014: We Are The Champions!

Tags: Be A Leader, Moral Character