The Leadership Lessons I Learnt From Studying The Life Of Socrates 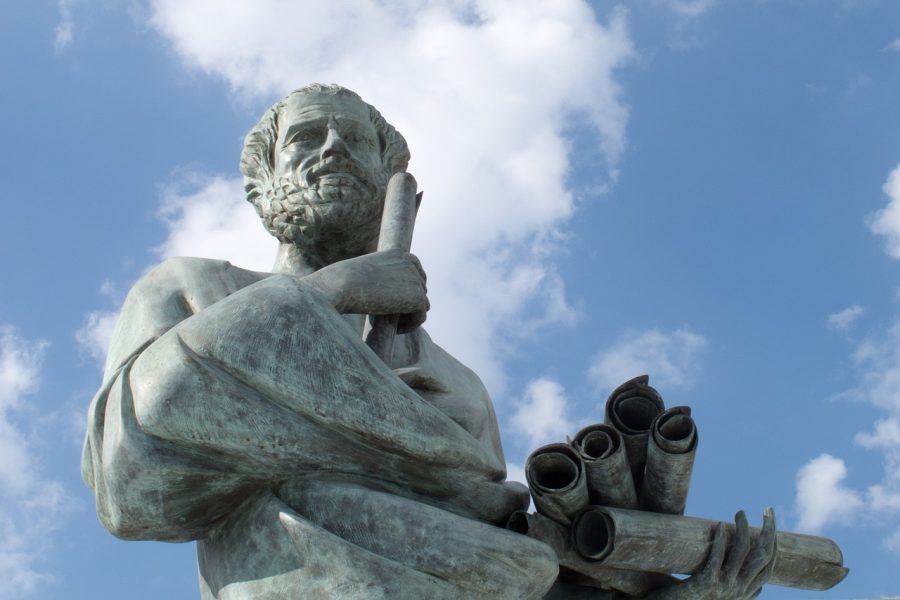 Four Leadership Lessons From The Life of Socrates

Let him that would move the world first move himself — Socrates

A few months ago I wrote about Benjamin Franklin and his famous ‘13 Virtues’.

In this list, Franklin prescribed a list of actions we should follow if we wish to lead a principled life of meaning. The last of these virtues focuses on humility. To be really humble, Franklin encourages us to “imitate Jesus and Socrates”.

As I read these words of Franklin, I became curious. I could understand Jesus and humility, but Socrates, the philosopher? This led me to read more about Socrates and to my surprise, the Greek philosopher has much to say on leadership and life. 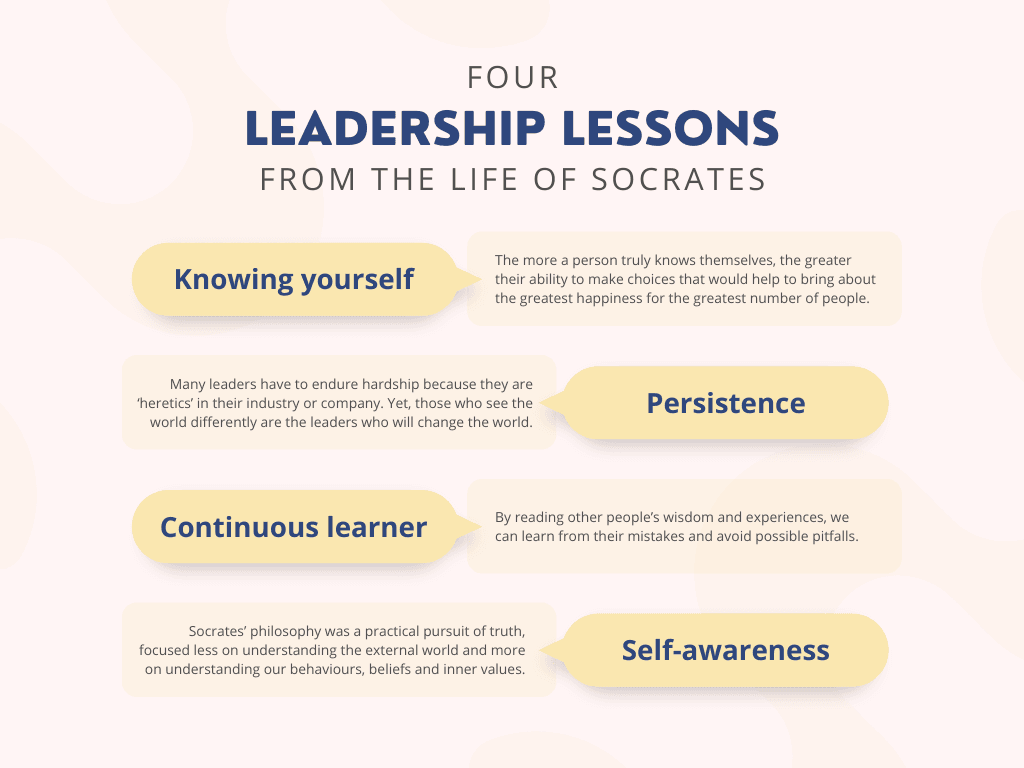 It’s difficult to think of any other historical figure who has been more influential in shaping cultures throughout the world. The philosophy of Socrates formed the basis of Western logic and reason thanks to his well-known ‘Socratic method’, which sought logical conclusions to complex problems through intensive questioning.

Socrates (469 BCE-399 BCE) was born in Athens, Greece, to a stonemason father and a midwife mother. Given his family’s standing, he would likely have received a simple education and been expected to follow in his father’s trade. Everything we know about Socrates stems exclusively from accounts by his friends and students, most notably through works by his students Plato (who would go on to teach Aristotle) and Xenophon.

Through his students, Socrates started to teach the world the importance of mentorship and discipleship. His physical appearance was the antithesis of the Greek ideal of beauty. Described as being physically unattractive, Socrates was said to be short and stubby with a flat nose and bulging eyes that made him look as though he was always staring.

It’s also reported that he would walk around the streets of Athens barefoot and would let his hair grow long. As for personal hygiene, Socrates shunned the habit of regular bathing. To his students and admirers, however, the appeal and attractiveness of Socrates came in the form of his stoic character and brilliant intellect.

As an Athenian soldier, his courage and fearlessness was unmatched. Socrates fought in three  military campaigns during the Peloponnesian War – at Delium, Amphipolis, and Potidaea.

Read: Lessons From A 20-Something Who Ruled The World

Perhaps the philosopher’s fearlessness was strengthened by his strong belief that matters of the human mind were vastly more important than the human body. Socrates had a keen passion for pondering the human condition, believing that our chief preoccupation as humans was the pursuit of happiness and that wisdom came from knowing ourselves.

He felt that the more a person truly knew themselves, the greater their ability to make choices which would help to bring about the greatest happiness for the greatest number of people.

Because of his views, Socrates believed that the best form of government was neither tyrannical nor democratic.

Rather, people should be governed by those with the greatest knowledge, abilities and virtues, and who possessed a deep knowledge of themselves.

Socrates’ style of intellectual engagement was never to lecture, but to ask questions of Athens’ elite and laity alike in search for wisdom and truth.

Inadvertently, his dialectic approach would often make important figures of the time look foolish, which gained admiration from some while others loathed him.

Jack Welch, my former CEO at General Electric (GE) was regarded by many as notorious yet revered by others. Yet, it never stopped him from changing his point of view to enhance his popularity.

Great leaders become great because they see the truth and refuse to disengage from sharing it with the world.

Check this out: Personal Lessons From History’s Greatest ‘Genius’

Death As A Heretic

A combination of his associations, virtuous actions (which saw him refuse certain orders on principle), political views, unorthodox teaching style and growing influence among the youth of Athens played a part in his three accusers, Meletus, Lycon, Anytus bringing Socrates to stand trial.

The crimes for which he stood trial were those of “refusing to recognise the gods acknowledged by the state, and importing strange divinities of his own; he is further guilty of corrupting the young.”

After listening to the accusers’ case and then Socrates’ defence, a jury of 500 determined the philosopher’s guilt by a vote of 280 to 220. Socrates, aged 70, was ultimately sentenced to death by poisoning, which was carried out by drinking a cup of hemlock in the presence of his friends.

We live in a world that hates non-conformity. Socrates was killed because he refused to conform to the accepted norms of society then. Gandhi, Martin Luther King, Joan of Arc and many others perished for being different. Yet, these are the folks that truly make a difference in this world. They stand up for what they know is right and they relentlessly stay true to their vision.

In business, although no one is killed anymore, many leaders have to go through significant pain and endure hardship just because they are ‘heretics’ in their industry or company. And yet, these crazy misfits and rebels who see the world differently are the leaders who ‘push the human race forward’ and change the world.

As a leading thinker of his time, Socrates placed a great emphasis on self-knowledge and learning, encouraging his followers to “employ your time in improving yourself by other men’s writings so that you shall gain easily what others have laboured hard for.” He also advocated that we should live as we wish to seem – to live as our ideal self through the means of constant self-improvement and refinement of character.

A number of years ago, one of my employees approached me and told me his ambition was to be a world-renowned speaker and trainer like John Maxwell and Robert Kiyosaki. I asked him what he does to keep learning and growing daily but he couldn’t answer me. I asked if he read books to grow in wisdom and he said he hated to read.

I told him he was unlikely to grow into a world-class teacher if he didn’t learn from others. Socrates had figured out an accelerated way to self-improvement. He knew by reading other people’s wisdom and experiences, we can learn from their mistakes and avoid possible pitfalls.

Great leaders are great readers and learners. They absorb the wisdom of others and complement it with their own experiences and failures, thus accelerating their growth.

Despite his apparent self-assured style, Socrates’ most notable quality was his humility, most known through his famous declaration that if he was the wisest person in Athens, it was only because he was well aware of his own ignorance, while others were too sure about themselves and life.

Socrates’ philosophy was a practical pursuit of truth, focused less on understanding the external world and more on understanding our behaviours, beliefs and inner values. His unrelenting passion for understanding himself and questioning everything inspired formal logic and ethics systems from the time of Aristotle through to the modern era. And thus the final leadership lesson we can learn from Socrates, that self-awareness is key to our success as a leader.

The life of Greece’s most renowned philosopher also served as an exemplary model for the rest of the world to follow. Few of us are willing to die in order to stand up for what we believe yet the example of Socrates is one that serves as an inspiration to lead a life of reflection, courage, virtue and understanding so that we might help to build societies of love, peace, and enduring prosperity. 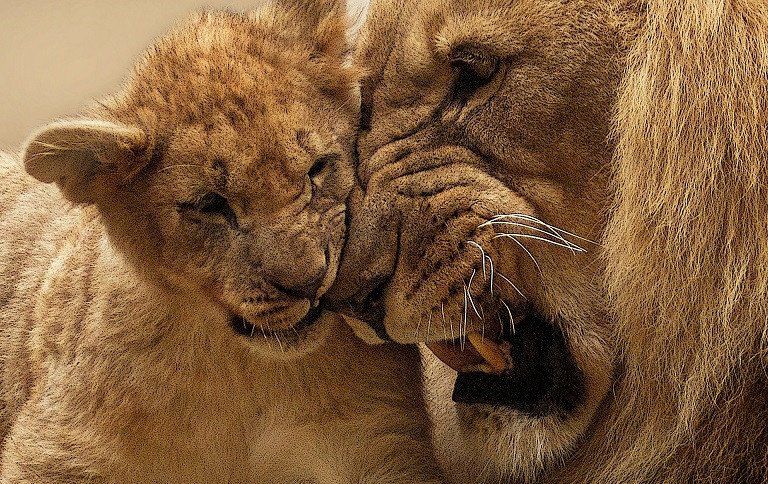 What Is Being Courageous To You And Your Organisation?