Leadership Lessons from Michelangelo the Artist 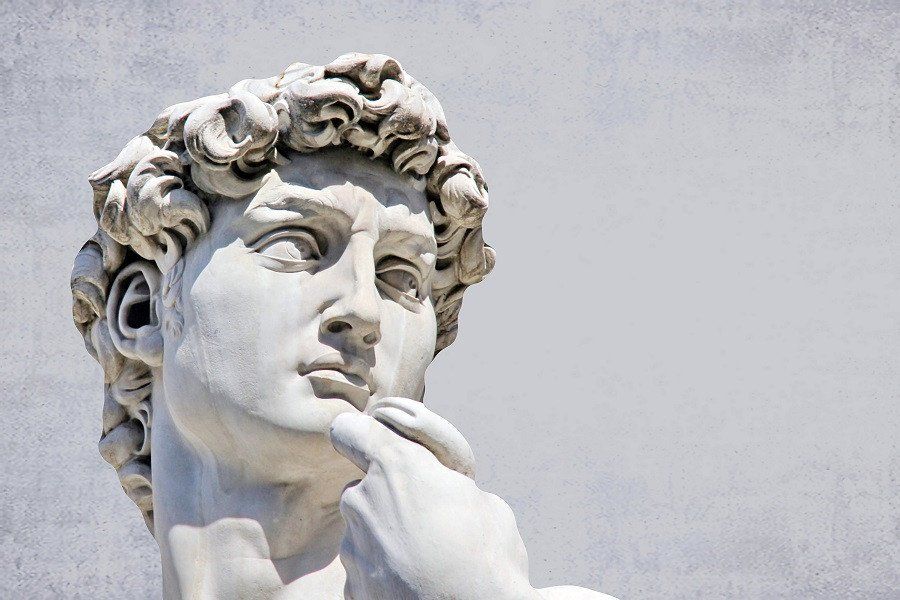 In 1997, I worked in Europe and as part of my work, I spent a few weeks in Florence, Italy, where I got to see the famous statue of David by Michelangelo. Recently, my wife (who is an art historian) reminded me about David and the great Michelangelo – the Italian master – who lived in one of the most famous periods of art, and created a legacy that would prove as timeless as his elegant masterpieces.

The works of Michelangelo (born Michelangelo di Lodovico Buonarroti Simoni) are familiar to most of us. The statue of David, the painting of the Sistine Chapel ceiling, and St Peter’s Basilica in Rome are just a few of his famous masterpieces that draw admirers from around the world. I know that we can learn from everyone, so I thought I would try to learn some lessons from the life of the great Michelangelo.

Michelangelo (1475-1564) was born into a family that claimed aristocratic roots. His father worked for the Florentine government, and despaired at his son’s inclinations towards the arts. At the time, it was viewed as a lowly profession, and certainly unsuitable for the son of a government official.
How often have we seen parents as obstacles to their child’s greatness? Regardless of his father’s strong opposition to his passion, the young Michelangelo, at the age of 14, drew the attention of Florentine leader Lorenzo de’ Medici, who invited the blossoming artist to reside at his home.

The making of a great artist

Michelangelo would subsequently learn from noted intellectuals and artists of the day, and the insights he gained from his time in the Medici home would influence his work throughout his life. It was during this time that Michelangelo honed his skills as a sculptor under the renowned Bertoldo di Giovanni, who was himself known for his sculptures. Although Michelangelo would become known for his painting and architecture, he considered himself a sculptor first and foremost.

Looking for something Cute: Get Potato Plushies

In terms of his personality, Michelangelo was – to put it mildly – often difficult. He was fiercely critical of his own work and experienced frequent mood swings. Although he became wealthy, he was neither known for his fashion sense nor hygiene, and he preferred to lead a life of solitude, interacting with others only when necessary.

One of his most famous works of art, the Sistine Chapel ceiling – which attracts more than 20,000 visitors per day during Rome’s summer months – has been described as “a cornerstone work of High Renaissance art”. However, Michelangelo was, as usual, critical about the awesome work he produced, writing in one letter, “I am not a painter”.

Interestingly, the commission to paint the Sistine Chapel ceiling wasn’t originally intended for Michelangelo, but rather his rival, the younger (and more personable) Raphael. The latter – in an attempt to discredit Michelangelo as a painter – convinced Pope Julius II to give the commission to his rival instead, hoping that he would fall from grace and be seen as nothing more than a sculptor.

Unfortunately for Raphael, Michelangelo spent the following four years (1508-1512) creating sublime frescoes that would reveal his genius as an all-round artist to audiences for centuries to come. 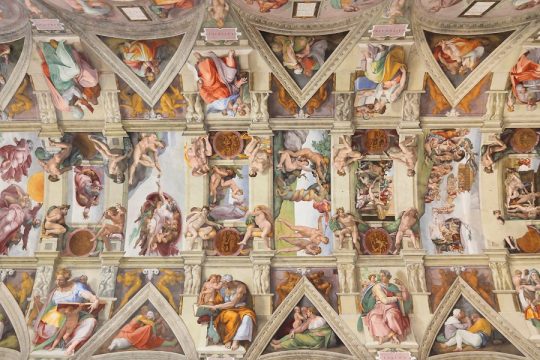 Despite the end result, Michelangelo faced numerous challenges in painting the Sistine Chapel ceiling. For a start, he had to learn the difficult process of painting in fresco – something he had never done before. He also had to find a way to create a suitable structure that would allow him to paint, standing high above the ground. He spent long periods craning his neck in order to paint, which inevitably caused him tremendous pain and emotional distress.

Michelangelo also found mould on the ceiling as he progressed in the project. He begged the Pope to allow him to quit, reiterating that he wasn’t a painter. However, the Pope summoned an expert to show the artist how the mould could be removed, and Michelangelo carried the work on to completion. As a man, Michelangelo could be difficult, stubborn, and single-minded. As an artist, he showed his genius across several mediums, and yet he endured a constant struggle with perfection.

His work drew admiration from all walks of life, but the Italian master was forever pushing himself towards perfection, which meant he never produced any work that was less than extraordinary. While we needn’t pursue our passions quite as fervently as Michelangelo, the example of his life shows that when we strive to be the best that we possibly can be, we can manifest great achievements that in turn inspire and empower others to develop their best selves. From the life of this great artist, there are many lessons that can push us beyond our perceived limitations and on to greatness, whatever that means for each of us.

Here are four leadership lessons from the life and times of the Renaissance master:

As leaders, it can often be a frustrating process to have an idea in mind and not see it come to fruition quickly. Particularly with long-term goals, we need to realise that it requires time and dedication to achieve or to master anything worthwhile. As the Italian master himself put it, “If people knew how hard I worked to get my mastery, it wouldn’t seem so wonderful at all.”

2. Use your time wisely… it’s a finite source

Successful entrepreneurs are always goal-oriented. They recognise the need to utilise their waking hours as efficiently as possible if they’re to make substantial progress. In Michelangelo’s time, an artist’s reputation was only as good as their last commission, and so they were compelled to continually hone their craft, develop and grow their talent. Michelangelo offers us this warning:

“There is no greater harm than that of time wasted.”

3. Growth is limited only by your imagination

One of the ways in which the iconic artists of history are distinguished from many others is their imagination and belief in their capabilities. Primarily a sculptor, Michelangelo was viewed by some as an absurd choice to paint the Sistine Chapel ceiling – but he took on the challenge with the belief that no other could do a better job. How many of us would take on a daring challenge outside our comfort zones? In reality, what we are capable of doing is far more than what we think we are capable of. In the words of the great artist, “Your greatness is measured by your horizons.”

4. Know your strengths and you’ll find your talent

Michelangelo knew what psychologists are now telling us: we flourish best when we put our strengths to use in whatever we do. Being proactive in making sure our capabilities align with whatever role we find ourselves in not only ensures a higher likelihood of producing quality work, but also boosts our engagement and well-being. As Michelangelo advised,

“Your gifts lie in the place where your values, passions, and strengths meet. Discovering that place is the first step toward sculpting your masterpiece, Your Life.”

In 1501, Michelangelo was commissioned to sculpt a statue of David by the city fathers of Florence, as a symbol of the city’s courage against its enemies (Florence was constantly attacked by larger city states and David, the Biblical character would represent their defiance to these enemies). Most artists at that time would have depicted David right after he slew Goliath, but Michelangelo decided to be different. He chose to sculpt David the young man, just before he encountered the giant Goliath.

He rationalised that David had two choices before he confronted Goliath – to run away in fear or stand firm and fight. He knew that:

This David was the ‘real’ David – a vision of a man not paralysed by fear, but standing up boldly in his hour of ‘terror’.

He even sculpted David with a larger right hand, symbolising his ability to control and shape a new world. This statue of David would be a turning point in the birth of the new Europe –and a move away from the Dark Ages. And because he was different, he has been called the ‘father of the Renaissance’.

Did You Know? Due to his talent and intriguing character, Michelangelo was so adored by Italians that they wanted to know as much about his life as possible. As a result, he became the first artist to have a biography of his life published during his lifetime.

One of the best ways to overcome challenges is to keep learning and growing yourself. Use necole for your personal growth. Necole is a state of the art learning platform that curates personalised learning just for you. To find out more about necole, click here or email info@leaderonomics.com 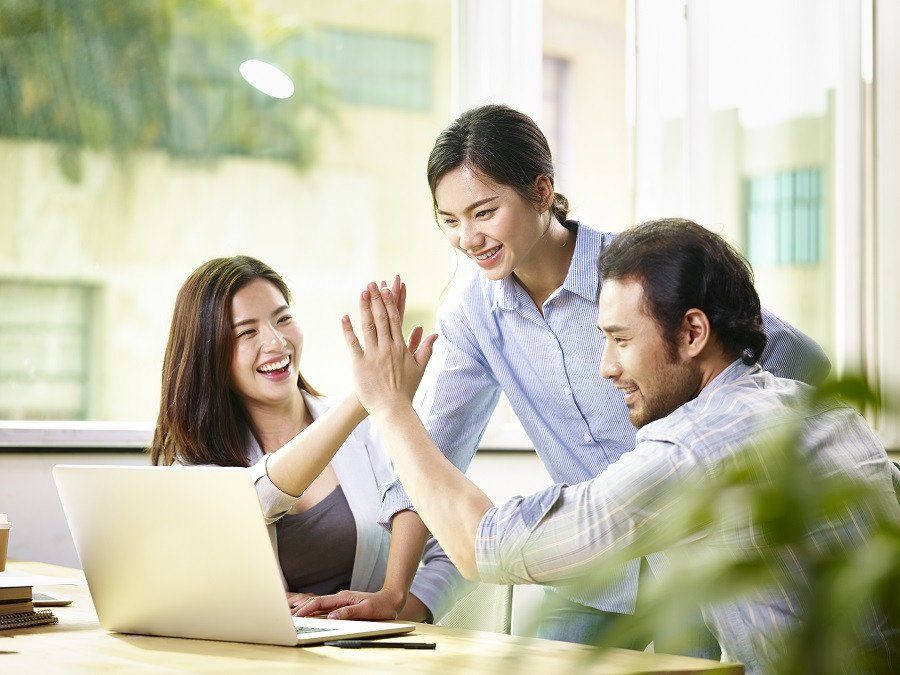 Gen Y’s Thoughts on How HR Can Do Better