Here’s To The Crazy Ones! 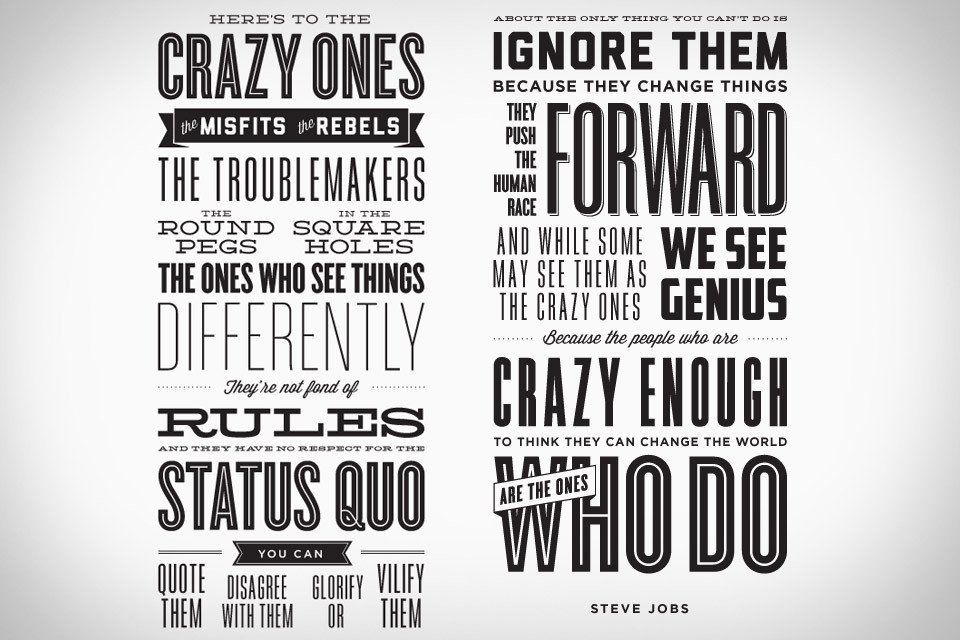 Each year, I have a personal tradition of quiet reflection of the year passed. Last year I reflected on death, as there were quite a few funerals attended. Death has permanence about it. Your game is up. One significant death was Steve Jobs. His death reminded me of the greatest resurrection of a company nearing death. By 1997, Apple was pretty close to its funeral ceremony. Its death was imminent. Then came “Think Different”, one of the greatest ad campaigns, bringing about Apple’s resurrection.

“Think Different” was based on a poem called “The Crazy Ones” by Craig Tanimoto. It goes:
“Here’s to the crazy ones, the misfits, the rebels, the troublemakers.

The round pegs in the square holes. The ones who see things differently.

They’re not fond of rules and they have no respect for the status quo.

You can quote them, disagree with them, glorify or vilify them.

About the only thing you can’t do is ignore them, because they change things.

They push the human race forward.

And while some may see them as the crazy ones, we see genius.

Because the people who are crazy enough to think they can change the world,

Are the ones who do.”

This campaign championed heretics in the workplace. They “push the human race forward” by breaking rules, disregarding tradition and disruption. Throughout history, these heretics changed the world. Galileo developed the early telescope and proved that the earth rotated around the sun. Yet, he was tried by the Inquisition, found “vehemently suspect of heresy”, tortured and spent his life under arrest.

Joan of Arc was 19 when burnt at the stake in Rouen. She defied the norms of society as a woman leading an army, to help the French claim victory over the English. She died a heretic, but was later made a saint. There is a long list of heretics throughout history breaking conventions yet changing the world. Buckingham and Coffman in “First Break all the Rules” concluded that the greatest managers in the world have little commonality, yet shared one common trait: They did not hesitate to break virtually every rule held sacred by conventional wisdom.

Who is a heretic?

I define a heretic as someone who has views, beliefs or actions that are in opposition to popular beliefs and traditions. A heretic in your company is someone who simultaneously holds great loyalty to your organisation, but has a revelation of a new truth the organisation has yet to grasp. According to Seth Godin, “a heretic is someone who has faith but could care less about religion.” He explains that, “there’s a difference between religion and faith.” Religion is a set of rules, rituals and tradition surrounding a faith. Heretics embrace the purpose of a business but would attack these “rituals” if they didn’t make sense.

Yet, behind many of the greatest business practices, which we now call “conventional wisdom,” lies a heretic; someone who fought for that idea when it seemed outlandish, implausible, and impossible. In a previous role, being true to form, I challenged some of the norms in that organisation. I changed how my team worked and we saw results.

The leaders were enthusiastic with the outcomes but the senior HR folks were not thrilled to see their “rules” broken. Before long, the threats of job loss and labels of being rebellious and insubordinate, wore us down, forcing conformity to convention. This is typically what happens to heretics – forced to conform or be “burnt at the stake.”

“Nobody ever got fired for buying IBM.” That cliché has mutated from a sales proposition to a warning to keep clinging to tradition to ensure your survival. How leadership executes is habitually centred on the way everyone before us did it. That approach may work fine – until someone changes the rules.

In the 1970s, the Swiss watch industry suffered brutally from the Japanese. Nicholas Hayek, a heretic, took dramatic action, merging ASUAG and SSIH to form Swatch. Within five years, Swatch was the largest watch-maker in the world, re-writing rules in the watch industry, by creating low-cost, high-tech, fun, and emotive watches. Fortunes are rarely won by those playing it safe; they are won by those willing to be rebellious to the status quo and attack orthodox beliefs or institutions.

At 26, Chip Conley broke the two cardinal rules of entrepreneurship: investing in an industry he knew nothing about, and ignoring the “location, location, location” mantra by purchasing a seedy motel in a dodgy area. A decade later, Conley is celebrated for his entrepreneurial genius in building his Joie de Vivre boutique hotels, beating giants like Marriott, Hilton and others, to the No. 1 customer service award in 2010.

Jack Welch showed scant disregard for GE’s 100 years of legacy in the 80s when he closed businesses, streamlined processes and fired people. Today, his “heretical” actions are regarded by many as management dogma, just as Galileo is revered today as a great scientist. The list doesn’t stop there.

Sir Richard Branson rebelliously built Virgin breaking every known business convention in the process. Sam Walton built Walmart into the largest company in the world with his unconventional daring approach. Walton says, “I always prided myself on breaking everybody else’s rules, and I always favoured the mavericks who challenged my rules.” Li Ka Shing, Andrew Carnegie and Jeff Bezos succeeded, because they were partly heretical in their approach to life.

Yet most organisations detest heretics, viewing them as troublemakers not toeing the company line. Most companies prefer compliance and are designed to wield tight control at the expense of autonomy. Modern heretics are not burned at the stake but are “cold-storaged”, ostracised or pressured to resign.

In 1988, Sony and Nintendo were working together on the Super Disc. Nintendo withdrew from the partnership and the project was closed. Ken Kutaragi, head of research and development of this project, was “transferred” to Sony Music. However, he became “rebellious” and insisted on going ahead with the project.

Sony initially resisted the creation of the PlayStation, but Kutaragi kept fighting the system and persevered, finally convincing Sony. If Kutaragi the heretic did not react, Sony would have never enjoyed the significant profits the PlayStation brought.

If we want progress, we should ensure our organisations are filled with people who flout convention, question constantly, and experiment fearlessly. They are annoying and inconvenient, but we need these rebels and the troublemakers because “they change things. They push the human race forward.”

On Sept 11, 2001, airlines were forced to shut down with passengers stranded. Instead of merely waiting, a “heretical” leader at Southwest Airlines took passengers out to the movies and bowling to pass time. While other airlines fired people post-9/11, Southwest retained all employees thanks to aviation “heretics” in employment.

A home for heretics

Medina opines: “You all have heretics. They are not your enemy. They are trying to help. They are not your problem – they are the start of your solution.” Organisations most hospitable to heretics find ways to bring out the best in them. Scour your organisation for positive deviants and build a heretic-friendly company.

The Minnesota Twin Family Study concludes that if youths are stimulated early in life with challenges and situations where they are forced to break rules modestly, their leadership potential is accelerated. Interestingly, we teach children to colour inside the lines, and then expect adults to think outside the box. Innovation is driven by a willingness to discard old ways of thinking and doing things. But beware; you want to raise the next Gandhi; not the next Bernie Madoff.

There is nothing like someone facing death to truly understand disregarding status quo and living. Like Apple in 1997 and Steve Jobs recently. Jobs famously said, “Remembering that I’ll be dead soon is the most important tool I’ve ever encountered to make the big choices in life. Because almost everything just falls away in the face of death, leaving only what is truly important.”

So go ahead and embrace your misfits. Cling and listen to your heretics. Remember, a heretic sees a truth that contradicts conventional wisdom, yet remains loyal to both entities: your organisation and the truth.

Heretics are not apostates; they do not want to leave the “faith”. Instead, they want your business to change and meet the truths they see. If the rigid CIA and Sony can welcome (and profit from) heretics, what’s stopping you? Start now by leveraging your “crazy ones”.

To watch a great video from the “Be a Leader” series, click below:

Failure Is Not The End