Gerd Leonhard is a leading expert on topics such as social media and communications, leadership and entrepreneurship, consumer trends, next-generation advertising, marketing and branding.
A futurist may raise eyebrows as an unconventional profession and would likely invoke the image of a psychic gazing into a magic crystal ball.

Essentially, this field involves foreseeing the future in order to help people understand, prepare for and gain advantage from what could be happening soon.

Gerd Leonhard is one such person who had taken this avant-garde path with much success. Described by Wall Street Journal as “one of the leading Media Futurists in the World” in 2006, Leonhard, the CEO of the Futures Agency, has travelled the world delivering keynotes and presentations about the future of marketing and the media.

A leading expert on topics such as social media and communications, leadership and entrepreneurship, consumer trends, next-generation advertising, marketing and branding, Leonhard is renowned for his hard-hitting and provocative, yet inspiring and motivational style.

From Musician to Futurist

Contrary to kick-starting his career by embarking on futures studies, the native German who now resides in Switzerland started off his career in music and the music business.

Gerd Leonhard attended Berklee College and obtained the institution’s “Quincy Jones Award” in 1985. He subsequently spent 10 years as a musician and producer in San Francisco. When he caught the Internet bug in the mid-90s, he went on to become a digital media entrepreneur.

Leonhard then wrote a book called Future of Music, which became a bestseller. He recalls: “I realised that as a businessman, I was always five to 10 years too early with ideas, which is not a good thing.”

That’s when his career as a futurist began. “As a futurist, I focus on foresight of a time frame of five years and work backwards.”

Leonhard claims that most foresights are obvious if we actually take time to look. For instance, in 1999 when Napster first came around allowing people to download music for free, Leonhard conveyed to Napster that users clearly want music to be in the cloud.

“Record labels didn’t like the idea because they couldn’t control what people do, but I told them that it is more important for them to be part of it. It took them 15 years to understand that,” Leonhard says.

The emergence of cloud music such as YouTube and Spotify brought about the near-demise of recorded music, which has declined by 70%. “Most people do not know most of the record labels anymore,” remarks Leonhard.

The Future of Music and Printed Contents

This brings about the question of whether physical music stores are going to be eliminated eventually.

According to Leonhard, we have never actually paid for the content when we purchase a music CD or a book, but in actual fact, paying for the packaging, shipping and distribution.

“The musician gets 5% if he is lucky. Therefore, not to have a physical package is better for the musician.”

Similarly, having e-books are better for a book author. “Even though only 2,000 people purchase the book for US$2 each, it is still more profitable for the author,” Leonhard evaluates.

He adds: “Even for newspapers and cable TV, we never actually pay for the content, which are borne by advertisers.” He foresees the future of the media to be predominantly advertising and premium-supported.

“In general, people are willing to pay. On the Internet, we see people paying for what they really like, such as Netflix, LinkedIn, Farmville,” he says.

Already, newspaper readers have gravitated towards online versions, which are seen to be more accessible in the form of a tablet or laptop.

This brings about the question of what the future holds for the dead-tree edition of newspapers.

Leonhard responds: “I think for economic reasons, to have actual objects is tougher, as it requires bigger investment. New York Times spent 80% of its money on infrastructure, such as cost of printing, truck drivers, etc.

“The future for the press is clearly going to be focused on cost-reduction, global distribution and servicing a large number of users,” opines Leonhard.

“Digital becomes the default and print becomes the option at an extra cost,” he continues. “Environmentally-speaking, devices may also be environmentally bad, so that’s not an easy equation.

“I foresee that books will be very affordable, from US$1 to US$2 and the print will be US$430.

“We will have more people connected to the Internet. With five billion people connected and each paying US$1 for a book, the readership would be more than what we have today,” Leonhard muses.

In general, Leonhard sees that advertising is moving at least 50% towards digital, interactive, mobile and this could be seen in every country. As such, advertisers should develop new creative rules for advertising of this nature.

Data – The Currency That Holds Everything Together

In this time and age, our mobile phones and tablets are akin to our external brain or “brain in a box” where typing in a search would result in instant answers. The drawback, however, is that you would need to type.

Leonhard envisions the future to be voice-controlled; like in a matrix, where you choose and pull out the data instantly.

“It is going to be eye glasses-controlled. It is already happening though, in the form of Google Glass. I’ve tried it and find it a phenomenal tool, though there are privacy issues to be resolved.”

Leonhard says that the Internet is moving into our body, just like implanted chips, which we see in movies in the 90s. Science fiction is indeed becoming a reality.

“For instance, being able to drive a car that can move on its own. Nonetheless, this would not happen unless data is shared. Data is the new oil. Data is becoming the currency that holds everything together,” he says.

Yet, Leonhard is uncertain if this transition is going to be easy for humans “because technology is exploding, but we humans remain the same.”

Looking beyond the obvious

It is essential for a leader in a company to be ahead, to forecast into the future and know where the company is heading in order to lead the team.

Leonhard shares two tips on the kind of mindset required:

1 Look Beyond the Obvious

If you are running a company, spend at least 10%, if not more, of your time looking for something which is not already existing, i.e. look beyond the obvious.

“Otherwise, what’s coming next will catch up and run over you,” he says.

2 Look At The Obvious and Do the Opposite

Do the opposite of what’s obvious and you will have a piece of the future.

As an illustration, when people are no longer subscribing or buying printed newspapers, the obvious reaction would be to make readers pay when they read their news online, which is the wrong move, Leonhard opines.

Instead, they should look at other ways to generate income, such as venturing into events, products, conferences, e-commerce or television.

For the younger generation who wishes to follow Leonhard’s footsteps to success, he has this piece of advice to offer:

“Be open towards changes which come out of the blue and go with it!” Leonhard enthuses. “As Steve Jobs famously quoted “Stay hungry”, because if you are too lazy and saturated, you will never get anything done,” he adds.

He says: “You have to take into account that you may fail. I failed many times, I went bankrupt with my Internet company. You fail, but you accept failure, accept that you do not know everything and keep trying till something comes out of it.”

The broader end in mind is to make the world a better place, he emphasises.

“Kids in this generation can be anything – data scientist, digital rockstar, 3D designer, run a spacecraft to Mars; anything is possible! This is fantastic. When I was growing up, we didn’t have that option. You have to buy a book to learn something,” he shares.

Leonhard stresses the importance of identifying and differentiating what is it that you want to do and what you could do.

“At the end of the day, you have to do what really matters,” he concludes. 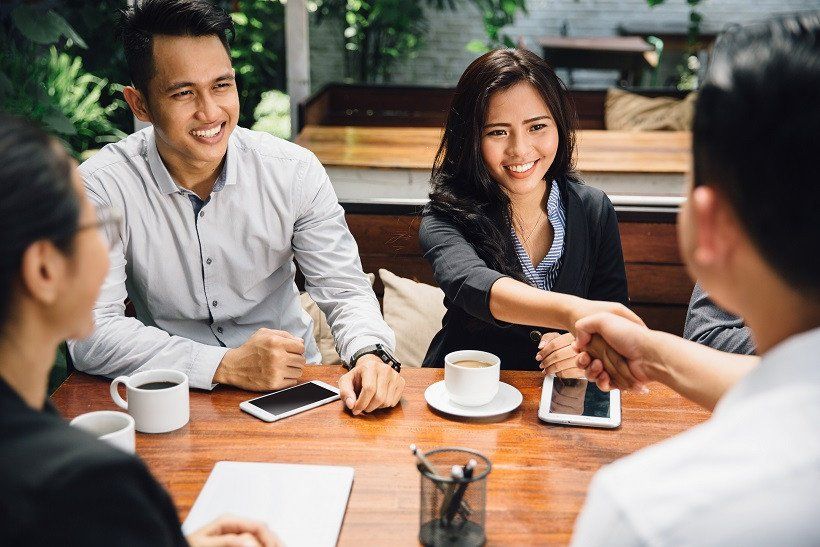 What Successful Salespeople Have In Common