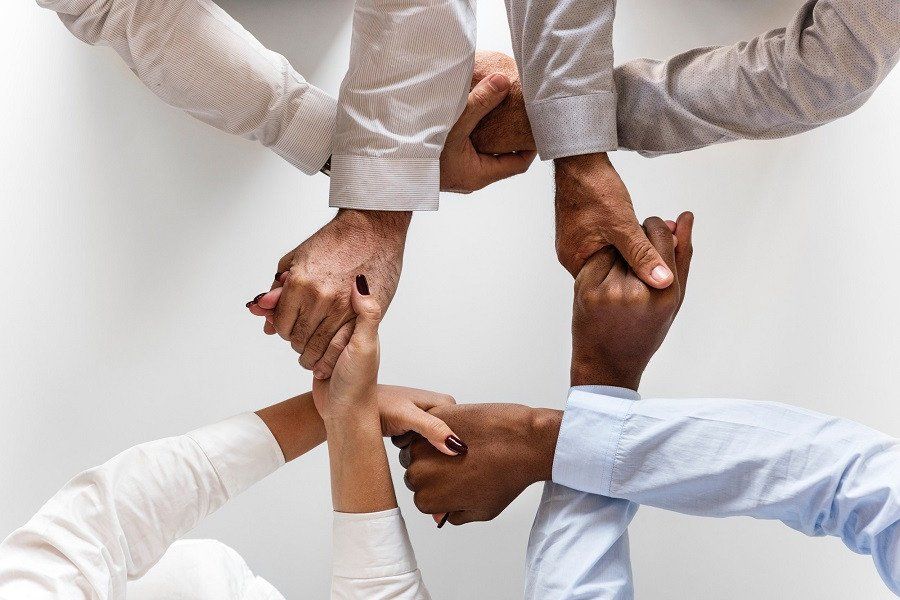 Sahara walked up to Junji Kaneshiro, a potential client, looked at him in the eyes and extended her hand for a handshake. Much to her surprise, he smiled, bowed and brought out his business card. She accepted the card with the hand that was extended for the handshake. Since she had read his profile the night before, she put the card into her pocket without reading it. She was perplexed to see the displeasure on his face; a strange feeling crept in. After an increasingly tense stretch of silence, she walked her client to the meeting room. None of her team members were there yet. Punctuality was not a company culture, but how could she allow it when they were meeting with an international client? It was embarrassing!
“Get everyone here right now!” she signalled to her personal assistant, breaking the awkward silence in the cold room. “How did I let this happened?” Sahara wondered as she sat waiting for her team to show up.

Is the meeting going to be a success, given such an uncomfortable initial encounter? In this case, both parties were unaware of the cultural differences between them.
FOR effective business, mindful and appropriate cross-cultural interaction is key. This is called cultural intelligence or the cultural quotient (CQ) – it emphasises cultural knowledge, mindfulness and behavioural skills to adjust to culturally diverse situations.
“Cultural intelligence is described as ‘patterned ways of thinking, feeling, and reacting, acquired and transmitted mainly by symbols, constituting the distinctive achievements of human groups … including their embodiments in artefacts; the essential core of culture consists of traditional […] ideas and especially their attached values …’” – Kluckhorn and Kroeber (1952)

Culture is so subtle that one may experience culture shock when confronted with cultural differences in values, attitudes, and behaviours. This can cause psychological disorientation and lead to negative feelings due to misunderstandings and the failure to recognise important cues. In today’s global environment, an appreciation of cultural differences is essential. In international business, culture shock affects expatriate mission accomplishment and intercultural insensitivity can affect staff performance and happiness at work. The increasing complexity of the global economy further justifies the need for interventions to foster cultural convergence. People need to understand when and how these differences are important. To prepare employees working in a culturally diverse environment, organisations need to inculcate a global mindset (the ability to appreciate elements of various cultures), promote agile thinking, and enhance cultural awareness.
RELATED ARTICLE: Language, Learning and Leadership: The Key To Understanding Cultures

“I must do something to promote punctuality!” Sahara thought to herself, as she sat waiting for her team. But, due to the enduring differences in the behaviours of people, achieving cultural convergence was a daunting task.

Organisations can promote culture hybridisation as a new way of viewing what were previously considered as distinct cultures.
This forms the basis to develop measures that enhance intercultural competence, as well as its closely related concept, cultural quotient (CQ) – an idea developed by Christopher Earley and Soon Ang in 2003. CQ is a specific form of intelligence that focuses on the ability to behave effectively in culturally diverse situations. It extends from earlier concepts of intelligence: academic, mental (the cognitive aspect of understanding differences), social, emotional (the emotional/motivational factors necessary for intercultural adjustment), practical, physical (the physical/nonverbal behaviour associated with cultural differences) and spiritual (the capacity to manage meaning, vision, values and beliefs). In a study by Bucker and Poutsma in 2010, CQ is one of the four essences (among intercultural competence, intercultural sensitivity and global mindset) of management skills that a global manager needs to have.

Global leaders who possess a high level of CQ potentially can influence a culturally diverse workforce, moving them to work together synergistically to accomplish common goals. Organisations can reach diverse markets more effectively if internal diversity is managed in tandem with CQ. Culturally intelligent employees are sensitive, adaptable, and embrace diversity more openly. More importantly, they have the capability to act accordingly when needed. These people serve customers better, and ultimately improve the branding of an organisation. Most individuals are a hybrid of two or more of the CQ profiles developed by Earley and Mosakowski.
Figure 1 shows the CQ profiles that distinguish between levels of cultural intelligence. 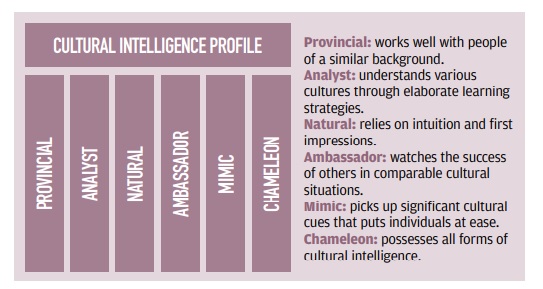 Figure 1: Cultural Intelligence Profile
The Chameleon is perhaps the most desirable profile; however, most people fall in the Analyst and Ambassador categories.
In today’s increasingly global and diverse business environment, the potential for business growth goes far beyond domestic markets.
This means that managers have to manage diverse teams of stakeholders – employees, customers, competitors, governments, partners, and other business players.
Digitisation and global mobility further allow organisations to operate globally and recruit a diverse workforce. In such global business environments, CQ is a critical capability of every manager.
People with high CQ generally are better managers as they are capable of reducing cultural barriers and leverage cultural diversity for innovation success. Cultural diversity stimulates innovation due to the presence of multiple perspectives from multicultural teams.
It fosters innovation success as it helps to reconcile cultural differences and mitigate conflict. This enhances the likelihood of achieving a culturally synergistic solution that embraces the ideas or interests of multiple parties.
READ: Raise Your Game: Getting Corporate Culture Right

CQ can be developed

The good news for organisations is that CQ is not elusive.
Everyone can be nurtured to become culturally intelligent. The yin-yang of CQ advocates an outside-in and inside-out approach to enhance CQ skills. The yin of CQ emphasises on the ability to enhance understanding of diverse cultural heritage, wisdom, and values through continuous learning. It adopts a more personal and passive approach. The yang of CQ is more active and aggressive. The yang approach focuses on the capability to manage people from different cultural backgrounds effectively. So, how can global leaders today, like Sahara, integrate the cultural differences and multiple nationalities to accomplish the goals of their organisations? Different working styles and subcultures have to be dealt with cautiously, as conflict inevitably accompanies intercultural work. Leaders have to rise beyond cultural awareness and sensitivity to manage workplace diversity effectively at every level of their organisation.

Figure 2 summarises the four cultural intelligence capabilities and their sub-dimensions. 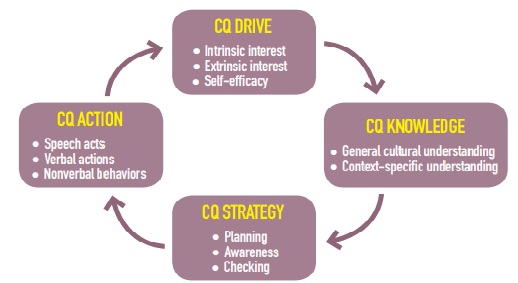 Dr Carol Hooi Lai Wan is an Associate Professor of Human Resource Management and Organisational Behaviour at The University of Nottingham. She specialises in global human resources and her current work is on competencies in the digital world. She is the author of “Human Capital Management Practices in Malaysia: Local and Foreign Perspectives” and “Governance and Citizenship in Asia: Organisational Justice and Citizenship Behaviour in Malaysia,” published by Springer. Currently, she is the Associate Editor of the International Journal of Manpower. To connect with her, drop us a note at editor@leaderonomics.com. 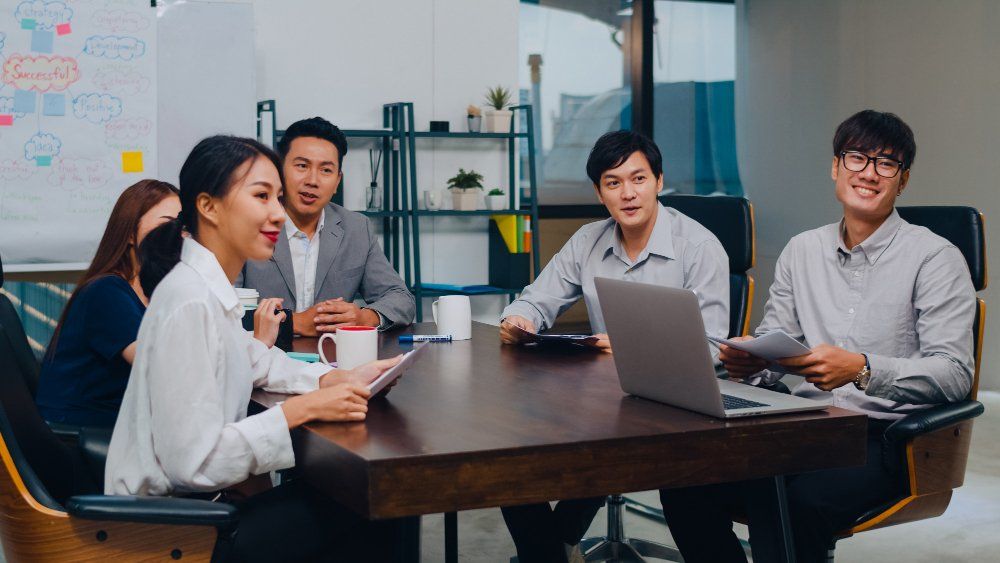 Dr Carol Hooi Lai Wan
Dr Carol Hooi Lai Wan is an Associate Professor of Human Resource Management and Organisational Behaviour at The University of Nottingham. She specialises in global human resources and her current work is on competencies in the digital world. She is the author of “Human Capital Management Practices in Malaysia: Local and Foreign Perspectives” and “Governance and Citizenship in Asia: Organisational Justice and Citizenship Behaviour in Malaysia,” published by Springer. Currently, she is the Associate Editor of the International Journal of Manpower.