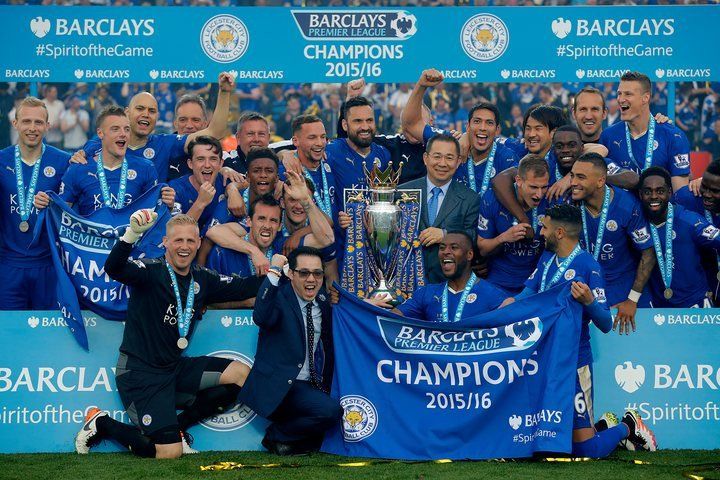 Source: Guardian: http://www.theguardian.com/football/gallery/2016/may/08/leicester-citys-premier-league-title-celebrations-in-pictures
Leicester City miraculously won the Premier League. Read on to how underdogs can keep winning against the giants of this world.


Civilisation has known many instances where David got the better of Goliath but none of which can come even close to the magnitude of Leicester City’s remarkable "underdog" exploits this season as they defied all odds to clinch the Premier League title for the first time in their 132-year history. Without a doubt, Leicester City’s staggering triumph will go down in history as one of the world’s most rousing sporting miracles.

Prior to the commencement of the 2015–2016 season, Leicester City was 5,000-to-1 odds to lift the coveted trophy. It was quite obvious that the bookmakers gave them absolutely no chance of winning and even offered punters the exact same odds of aliens landing in their backyard, among many other peculiar things.

Let’s have a brief throwback to seven years ago: Leicester City was relegated to English football’s third-tier and the idea of even playing in the top flight would be branded delusional by many.

Just at the end of last season, Leicester City (also known as the Foxes) produced arguably one of the greatest comebacks since Lazarus as they ‘resurrected’ their way up from the bottom of the table (20th of 20 teams) to 14th place as the Foxes managed to put together a phenomenal run of seven wins from their last nine fixtures to survive rather comfortably after a nerve-wracking season.

What Leicester City has accomplished this season was totally unprecedented and has everyone in the football and non-football fraternity talking about this underdog win against the other Goliath teams.

What can businesses emulate from Leicester City’s success? Is there a secret formula to their rags-to-riches tale?

Christened “The Tinkerman” for his propensity to alter his starting lineup from one match to another, manager Claudio Ranieri has been at the epicentre of a radical transformation in his side’s fortunes throughout the season.

Ranieri was initially concerned as the Foxes had a leaky defence that had prevented his side from keeping clean sheets until late October. Before every game, he would issue a rallying cry to his players to galvanise them to keep a clean sheet by offering pizza as an incentive. Ranieri, being a man of his word (and Italian!) took his players to Peter Pizzeria, a local restaurant in Leicester City Square where they made and ate their own pizzas.

In Ranieri’s article We Do Not Dream published in The Players’ Tribune, he wrote:

You have to work for everything. You work for your pizza, too. We will make our own.

Businesses should seriously consider granting incentives to its employees, as they would feel valued and motivated. This would surely go a long way in increasing the productivity of your employees.

Leicester City’s squad this season cost just £62mil (RM359mil). That sum is a far cry from other football giants and rivals.

Manchester United, for example, spent a whopping £391mil (RM2.27bil) to assemble their team. Yet, Manchester United didn’t make it to the top four with their huge spending and the finest coaching staff from around the globe.

It’s clearly a case of two extremes in which Leicester City have outsmarted much richer and famed teams by pooling their resources in the right places as well as wise decision-making by the board. They didn’t chance their arm on big money signings, preferring instead to focus on solid groundwork, ingenious scouting and strong team support.

Leicester were very shrewd customers in the transfer market and made several bargain deals. Jamie Vardy, Riyad Mahrez and N’golo Kante, who proved to be important players this season, were signed for a combined sum of little less than £7mil (RM41mil), an outright steal of a deal in the eyes of many.

It is clear that Leicester City pounced on undervalued talent and made the most of the limited resources available. Moreover, Leicester had in their ranks, Steve Walsh, the ‘chief talent manager’, who played an enormous role in scouting some of their topnotch players.

Businesses should also mirror Leicester’s tactics by having a strong grassroots system in place. They should build their company around high potentials and should never fail to take calculated risks on hiring employees deemed as underrated, but possess great strengths at different capacities, and great attitudes.

3. Divine intervention, but do your part too

With a net worth of £2bil (RM11.6bil) according to Forbes, Leicester’s owner, Vichai Srivaddhanaprabha, made his riches through his King Power duty-free stores, which have a large monopoly in the three major airports of Thailand. He is a staunch Buddhist and has done fairly well in incorporating religion and sport at Leicester City. The talk of the town is that Buddhist monks have given Leicester a spiritual edge over their adversaries.

But that doesn’t mean that we can rely on just prayers and not work hard for the end goal. When Leicester fans tell Ranieri that they are dreaming, he simply says to them:

Okay, you dream for us. We do not dream. We simply work hard.

Spirituality is one key component in any leader. With faith and belief, it bolsters your creativity by helping you solve problems with an external perspective. It enables business leaders to keep cool especially when they make critical decisions for their company to ensure the best possible outcome.

A dose of prayers has also been scientifically proven to reduce stress and takes your mind of nagging issues for a while. It enables you to see the bigger picture in every situation you face, with a hope and an unshakeable belief that everything is possible, only if we believe.

The best teams are made up of a bunch of nobodies who love everybody and serve anybody and don’t care about becoming a somebody. – Phil Dooley

What are some of your thoughts about this tremendous tale of triumph in this beautiful game of football? How has this incredible story of sheer grit taught you? Share us your thoughts in the comment section or write to us at editor@leaderonomics.com. For more Thought Of The Week articles, click here.

Kenneth Samuel is a brilliant young man who has recently been diagnosed with Stage 4 cancer. He continues to be a football fan supporting underdog teams like Everton and Leicester City and continues to dream that underdogs can overcome the odds to success.

Kenneth Raj Samuel
Kenneth was an intern at Leaderonomics and a hard-core Everton Football Club fan. An alumnus of SMK Sri Permata, Kolej Yayasan UEM and University College London (UCL), he had a strong affinity for big data analytics through artificial intelligence A strong proponent for better financial engineering integration and the automation of operational processes in our everyday lives, he gallantly battled with cancer for many years before returning to his Creator at the age of 22. He continues to inspire many by his short-lived, yet impactful life