The Wonderful World Of Disney

Imagineering with Three Chairs the Secret to Innovation

As a kid, my whole family would all look forward to gathering together to watch The Wonderful World of Disney on TV. Every episode was inspiring, filled with dreams and promises of the wonder of Disney. I dreamt of going to Disneyland one day to experience this promise of a magical land.

Many years later, that dream was realised as an adult. But the promise Disney made to me as a kid still held true. And it got me thinking, “how many companies that make promises actually keep those promises?” Disney kept it and continues to touch everyone.

Every young girl dreams of becoming a princess thanks largely to Disney. Try imagining a world without Disney, without magic, optimism and childlike-fantasy. The Walt Disney Company was the creation of a high school drop-out who suffered bankruptcy numerous times, and suffered repeated financial and business disasters. How did one man, Walt Elias Disney achieve so much?

Walt Disney is best known for developing Mickey Mouse. Yet, behind this man is an amazing leader. Walt with his brother Roy changed the world through animation and created Disneyland, the “happiest place in the world”.

Walt Disney was born to Elias Disney, who moved to California in search of gold, but ended up a farmer. Walt developed a love for drawing and dropped out of school, and joined the army to drive an ambulance. At 19, he started his first company called “Iwerks-Disney Commercial Artists”. However, it soon went bust. Walt decided to get a “real job” and worked at an ad company but was soon fired for not being “creative enough.”

Eventually, he started another company, Laugh-O-Grams, which also went bankrupt. Walt went to Hollywood, facing more failures and setbacks in attempts to create a successful cartoon series before finally creating Mortimer Mouse. His wife insisted on changing Mortimer’s name to Mickey Mouse, who went on to stardom overshadowing then popular Felix the Cat.

Walt continued to struggle, even after winning his first Academy Award in 1932. His big breakthrough came with Snow White and the Seven Dwarfs. But his company kept facing financial issues as Walt was always defying chasing impossible dreams. Walt never once gave up sight of his dream to create “the happiest place in the world.” Even in the dark hours when Charles Minz, a big film distributor “stole” the rights of Oswald the Rabbit (the character that first put the Disney Brothers on the map) and hired away his top animators, Walt and his brother Roy kept pressing on.

Walt was never afraid to roll up his sleeves and get his hands dirty. Years ago, journalist Art Linkletter turned up early for the press conference of Disney’s Fantasia. He found the place empty except for one fellow who was busily arranging chairs. He asked, “When is Walt Disney supposed to arrive?” Walt grinned and said “I’m Walt Disney.”

Walt Disney was always an innovator. In “Steamboat Willie”, he created the first-ever animated film that synchronised sound. Walt was first to use three-strip Technicolor. He developed a two-story-tall multi-plane camera, later adopted by everyone. He made the first film with Fantasound (an early surround sound-like system), first with CinemaScope (widescreen technology), audi-animatronic robots and the first colour TV programme.
Walt was never satisfied, always tinkering, fiddling with new things, seeing how far their capability could be stretched, and then creating something better. What was the secret to his innovation, creativity and imagination? 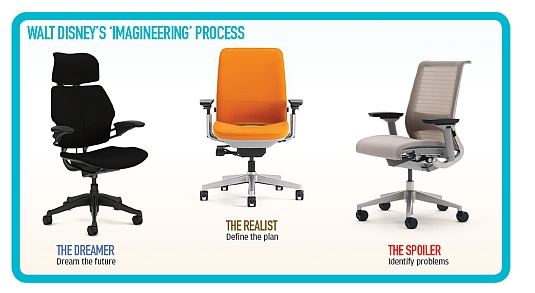 An animator who worked for Walt said:

“There were actually three different Walt: the dreamer, the realist, and the spoiler.”

Walt had a secret. His secret: 3 chairs. Yes, his secret was having 3 chairs in his office which never moved. Each chair was anchored to 3 different mental perspectives and he gave names to these chairs, naming them:

Walt found an approach with his 3 chairs exercise, calling it “Imagineering”, a term combining the words “imagination” and engineering”. Robert Dilts, in his book Strategies of Genius: Volume 1, studied Walt in great detail and adds,

Walt Disney never stopped dreaming new possibilities. Walt understood that possibilities were only limited by our imagination. And his 'dreamer’ chair was for this sole purpose to sit down with unrestrained creativity, no constraints, unlimited resources, and questions like “what would I love to create next”, “how would it look like” and “what would touch people’s lives”.

Walt resented limitations claiming, “I can never stand still. I must explore and experiment. I am never satisfied with my work.” Walt the dreamer would visualise extraordinary scenarios in his chair.

Today thinking outside the box’ is the hype for innovators. Yet Walt refused to accept the existence of a box saying,

“Don’t think outside the box! Once you say that, you’ve established that there is a box.”’

Once Walt spent enough time in the “dreamer” chair, he would move over to the “realist” chair. The realist is pragmatic and practical. The realist asks, “How, in practice, could we make this dream work?” He would begin the process by asking hard questions about his just crafted dream:

In the “realist” chair, Walt focused on action assuming that the idea could be done. He “felt out the idea” and worked out the idea, the story, the character, the solution.

If (Walt and his team) were working on a new roller coaster, like Space Mountain, they imagined what it would feel like to be sitting in the roller coast as it raced around each winding turn, slowly climbed each steep incline, rapidly dropped down each descent. They noticed how the seat and the straps felt on their bodies. They heard the sounds of the roller coaster and saw the lights flashing as they coursed through the whole ride in their minds. The Realist filled in the blanks of the original idea created by the dreamer.”

our work must have a foundation of fact. We must know everything about it. We cannot do fantastic things unless we know what is real and what is not.

Walt the Critic worked this chair by asking “I know there is something wrong with this. What is wrong with this?” The focus on this chair was on why’ why do it this way and why do this at all. Walt subjected everything to rigorous scrutiny. He claims that “every foot of rough animation was projected on the screen for analysis, and every foot was drawn and redrawn until we could say, This is the best we can do’.”

The Critic plays a key role in finding loopholes–things that may go wrong and uncovering issues that the dreamer and realist failed to spot. It was essential for Walt to spot these gaps so that it could be fix before his audience discovered them. Other questions Walt would ask sitting in his “Critic” chair:

The spoiler critically evaluates the work of the realist and dreamer and Walt knew its importance saying “We were growing through self-criticism and experiment. Each year we could handle a wider range of material, attempt things we would not have dreamed of tackling a year before. This is not genius, or even remarkable. It is the way people build a sound business of any kind.” To Walt, his 3 chairs were just sound business processes.

Dilts, who studied Walt for years, found his strategy useful not only in planning, but in coaching people, “It’s helped me understand that it’s not because people are unrealistic’, or wishy-washy’, cynical’, it’s that they lack enough different perspectives to see things from.”

If we aspire to be innovators, we need to have perspective. I found that for each project I work on, consideration of the 3 perspectives helped take the project to a whole new level. Dream the impossible, then make that dream possible and then see if the critic in you can shred your work by finding flaws.

Walt Disney died before DisneyWorld in Florida was completed. On launch day someone commented to Mike Vance, creative director of Disney, “Isn’t it too bad Walt Disney didn’t live to see this?” Vance quickly replied, “Yes, he did see it. That’s why it’s here.”

Walt loved people, including his employees and his family and was a great teacher who pushed his employees out of their comfort zone. Disney employee Blaine Gibson recalls,

“Walt had more confidence in us than we had in ourselves. I’m a sculptor now, but I used to be an animator. But Walt saw me as a sculptor and sold me on it. He made me believe I could do it. He gave us the confidence to do things we never imagined were possible.”

Walt had great leadership traits, including his tenacity to never give up and keep pursuing the dream, even in the most horrible circumstances. But most importantly, Walt Disney understood the process of innovation. He knew he needed to be willing to take chances on innovative technologies at an early stage, when others expressed concern. Walt was always optimistic in his convictions because he knew his “imagineering” 3 chairs exercise had ensured he had considered all the risks and knew exactly what he was getting himself into.

Walt and Roy operated at the very edge of financial decay so many times. They risked everything they had numerous times, when many would have said “let’s play this one safe.”

Had he been just a “dreamer”, he would have died bankrupt and forgotten. He was fearless, but he wasn’t reckless. Neither should we when it comes to innovation. All we need is 3 chairs and we become “imagineers”.

Watch a short video on this article:

You can follow Roshan Thiran on LinkedIn, website or Insta. To read more of his articles, go here. If you are looking for a great personalised learning tool that is not only affordable but would enable you to grow into a great leader, check out necole 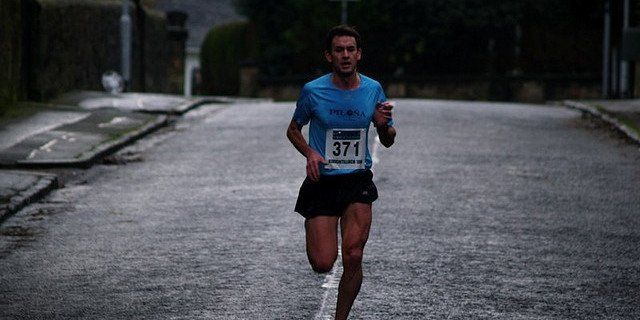