How Can Companies Practice Disruptive Innovation, And Avoid Failure? 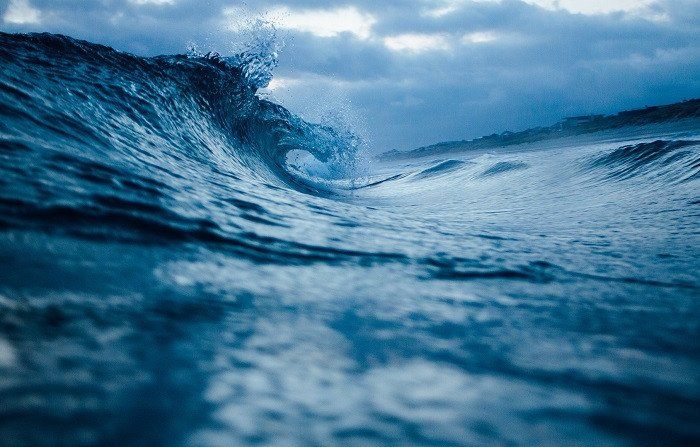 The term is enough to set business leaders reeling either in anticipation or fear. But is the possibility that someone might reign over your success a bad thing?

In case you were wondering, no I have not read the book where the quote comes from but I figured since the quote is pertinent to what this article is about, I might as well include it!

Disruptive technology: The term may or may not be foreign to you but we’re no strangers to such innovations.

Coined in 1997 by Clayton Christensen in his book The Innovator’s Dilemma, disruptive technology means any innovation that either creates a demand in the market which does not exist (yet) or is one that caters for the lower end market and slowly makes its way up to the masses.

Either way, at the heart of it all, a disruptive innovation creates something new (the technology) while destroying something else (an existing market).

Here are a few examples of disruptive technologies that have altered the market in the last decade: 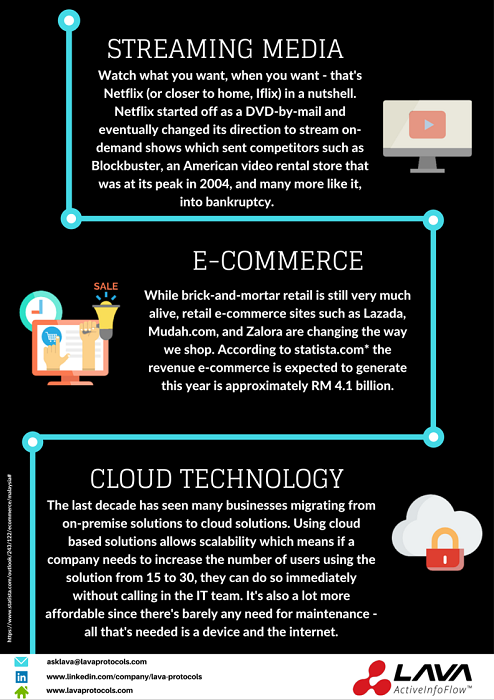 Today the pressure is imminent on companies from various industries to stay relevant and ahead of their competitors. We’re viewing destructions of Goliaths such as Nokia who was at the top of their game in 2007 by controlling 41% of the mobile handset market.

The shutdown of Nokia—due to the uprising of devices created by competitors such as Apple and Samsung—a year later was painful not only for the company but also for Salo, the Finnish region which has seen more than 1,000 retrenchments by Microsoft, barely a year after the software company bought over Nokia.

So what should businesses do to prevent such a tragic fate?

The problem is that businesses seek to protect their cash cow. As companies grows bigger, they hire new employees to look over their existing products or services. The solution is thus to keep on evolving or self-destruct.

According to Arjun Sethi, co-founder of Littleinc, once a company has reached the top of its game, it needs to evolve into a platform that allows other companies to integrate into their own products. He quotes how P&G has survived in the business for 178 years by creating a family of product brands and pitting similar ones against each other. 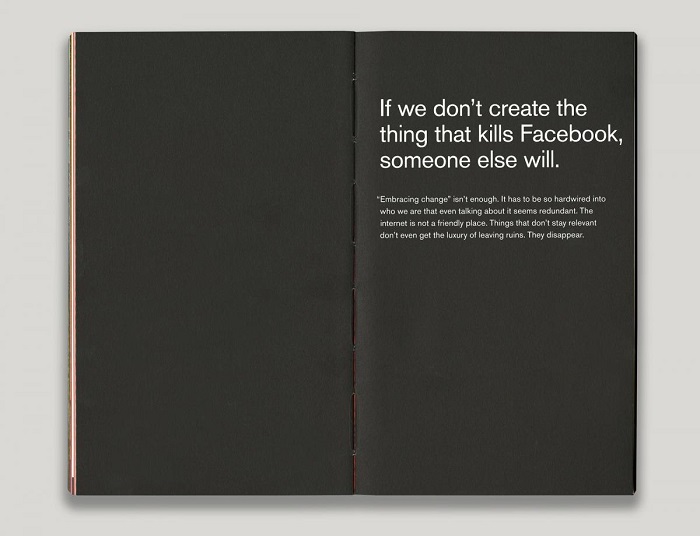 Deliberate disruption on the other hand (or as the image above taken from the pages of Facebook’s Little Red Book simply puts), requires the company to “self-destruct.” Sethi explains that Apple’s iPad has the potential to take away the audience of another product that it owns, Macbook. In The Innovator’s Dilemma, Christensen writes that businesses need to create the very thing that is capable of shutting them down before someone else does it for them.

But the truth is, despite playing by the rules of innovation, creating a research and development department, and meeting the needs and demands of customers, some companies are still falling behind. 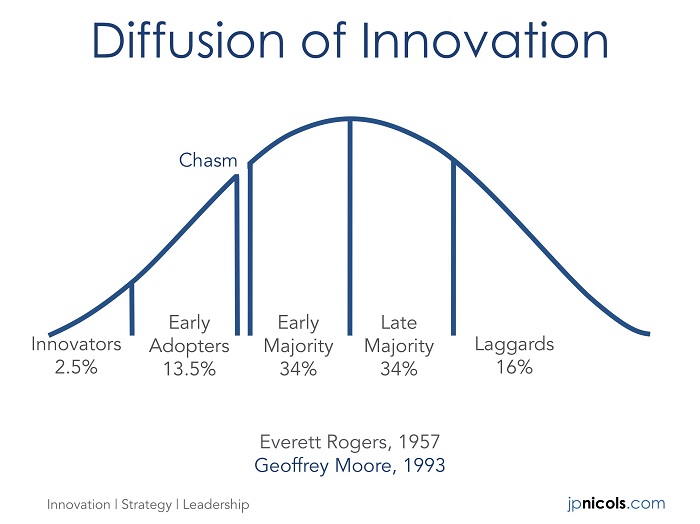 The chart above shows the consumer’s adoption life cycle of a technology. The questions these failing businesses need to ask is how fast are they innovating? Because by the time a technology reaches the laggards, both the innovators and early adopters have already moved on to the next big thing that’s going to kill the previous technology.

And whilst there are countless of number of ideas out there, innovative ones are scarce. One way of creating innovative ideas is to tackle adaptive challenges. Most businesses and governments address technical problems which are not only ineffective but also a waste of resources. Adaptive challenges on the other hand require changes in values, beliefs, roles, relationships, and approaches to work.

On Aug 18 2008, journalist Lauri Malkavaara, penned a lengthy letter writing his dissatisfaction with his Nokia E 51. He compared the mobile with the then newly released iPhone 3G. What resulted was a meeting with a manager who insisted that the phone was effective.

If the C-suite folks took the opportunity to overturn an unhappy customer’s letter of complaint as an adaptive challenge to resolve, the business might still be around.

Addressing disruptive technology in a different way are companies such as Microsoft, Disney, and Nike. These companies are avoiding the curveball by collaborating with start-up accelerators.

In December 2012, Nike teamed up with TechStars, a mentor-driven start-up accelerator, to connect with companies that could create athletic and health-related products and services. Businesses provide the funds and a platform for start-ups to launch an innovation as well as a certain amount of equity in return for ownership of the innovation.

As the drive to create new products and services continues, it’s vital for business leaders to understand their creation. Does it address a current need or is it creating a need that the average user has not thought about? The latter tends to be the tougher question to ask but it also happens to be the one that yields a higher rate of success.

For example, KaleKam, a brainchild of two friends from Ecuador and Malaysia, is an app that gives you all the information about what’s on your plate based on your pictures. Most fitness apps these days require the user to manually key in information such as servings, grams, portions, etc.

KaleKam on the other hand, which is still in its developmental stages, simplifies this process. If the app has a stickiness factor or sets a complex barrier to prevent competitors from emulating a similar app, there’s a high chance that it will succeed over other nutritional apps; but if it doesn’t create or sustain the demand, it could simply fade away.

Often an innovative idea is shot down with remarks such as “users don’t need this” or “there’s no value in it.” The point is how many of us were thinking of WhatsApp Messenger as a substitute to short message service (SMS) and calls, or even Waze as a navigator instead of pulling over at the nearest mamak restaurant to ask for directions?

If such remarks upended the spirits of disruptive innovators, companies such iFlix and iProperty would not be around to rake in millions. Founder of both companies, Patrick Grove mentioned that iProperty was rejected 74 times and iFlix 115 times before they successfully raised funds.

The bottom line is that companies have always been aware that if they don’t change or move towards a new direction, someone else will be sitting on their throne and that disruption is essential for progression. It’s like the real life version of Who Moved My Cheese; what stops companies from creating the next big app such as Grab or service such as Zalora is that these companies overestimate their brand’s current value—just like the quote at the beginning.

Lava Protocols is a digital architect that has been revolutionising businesses of all sizes, from various sectors by consulting and bringing together business success through implementation of leading cloud based solutions such as Salesforce.com and Google. For more articles by Lava Protocols, click here. For more Hard Talk articles, click here. 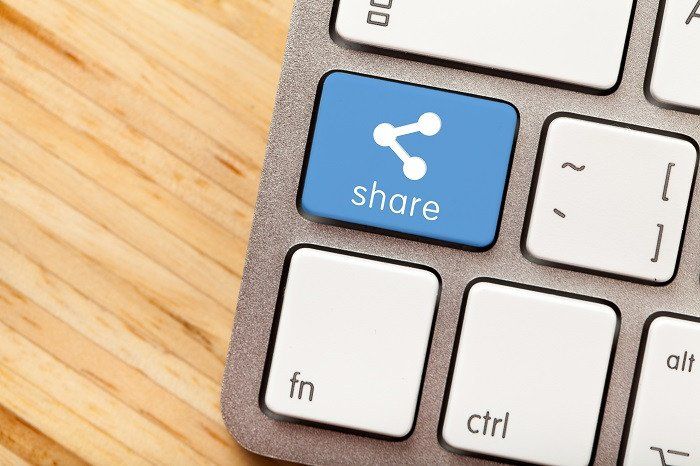 5 Things That Brands Should Be Doing On Social Media