Passing The Torch For The Love Of Malaysian Women’s Football 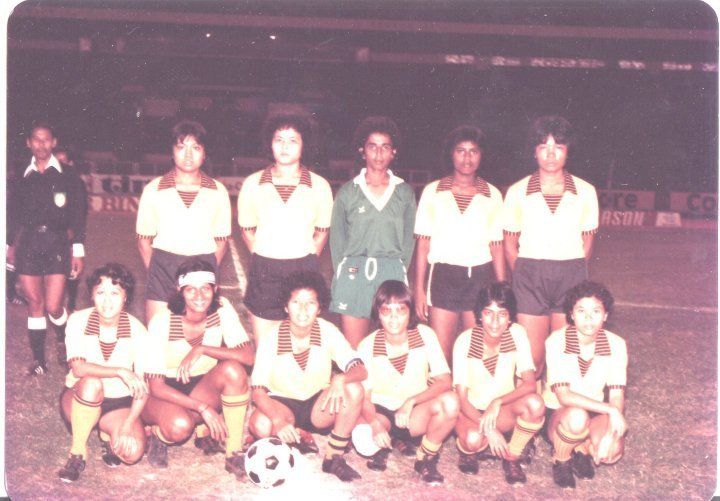 Stars do not have to dim with time. In sport especially – given the emphasis on physical fitness and youth – the best and brightest of every generation are often faced with the issue of longevity in their respective sports.

Can their prowess survive time, new competition and even the different phases of life?

The answer is yes, mostly. Passion and perseverance, the cornerstone concepts of every athlete, are the pillars to keeping stars burning bright.

In fact, these stars do not necessarily have to be their own anymore, but those of a new crop of talent raised in their lead.

Leaderonomics recently caught up with two former Malaysian women’s football players who, having played for the country together in the 70s and 80s, are now actively involved in developing a broad-based talent pool across the country.

Having played for the country from 1979 to 1985 (well into her years as a wife and mother), Rachel Gomez, 58, was recently appointed by the women’s football unit of the Football Association of Malaysia (FAM) to identify talented girls under the age of 12, and work at the grassroots level.

Kicking off her sporting career as a striker for the Negeri Sembilan women’s team in 1975, Gomez went on to don the national jersey in major tournaments around the region.

The first of these was the 1979 Asian Cup in Calicut, India, before competing in major tournaments in countries such as Thailand and Indonesia until 1985.

Raised in a family with a voracious appetite for sport, Gomez decided to enter the world of women’s football during the golden age of Malaysian football, which saw the rise of legendary household names including Mokhtar Dahari, Datuk Soh Chin Aun, R. Arumugam and Santokh Singh. 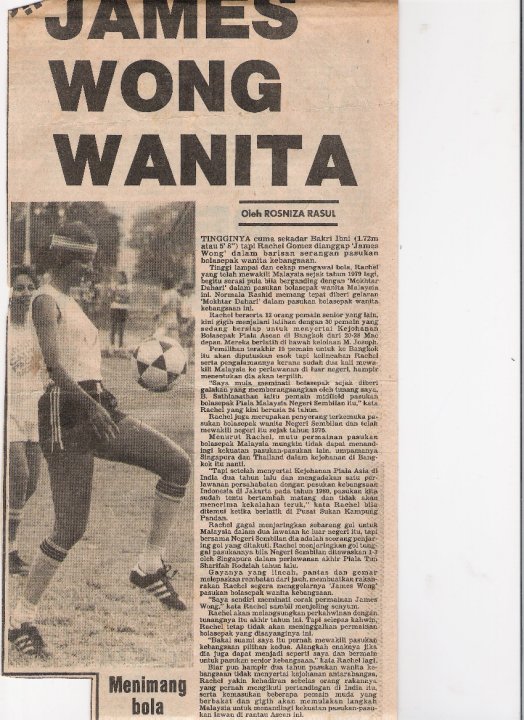 Gomez was dubbed the ‘James Wong’ of women’s football 30 years ago.

“Sports was a major part of my life, growing up,” says Gomez.

“It runs in my family. My late father was a footballer in Kerala, India. One of my brothers played in the Burnley Cup (known later as Piala Razak) and later for Negeri Sembilan, and my younger sister played hockey for the country. I took up football in the 70s, and was selected to play for the national team in 1979.”

“Ever since then, I never looked back. My last game as a striker was in Malaysia in 1985 and my highest achievement was winning a bronze medal in Thailand.”

In her days on the field, the mother of three – whose son has now taken up football full-time – and grandmother of one had once been dubbed by the press as the ‘James Wong’ of local women’s football, a reference to her counterpart over in the men’s team.

“I have kept this newspaper cutting for 30 years! I felt honoured to be nicknamed “James Wong” as he was a good player,” she says.

Speaking about her contribution to identifying youngsters, Gomez, who was also given the opportunity to help set up and manage the Negeri Sembilan ladies football team, says: “I feel that with all the experience I have gained, I have lots to contribute to youngsters. They are the future of this sport.” 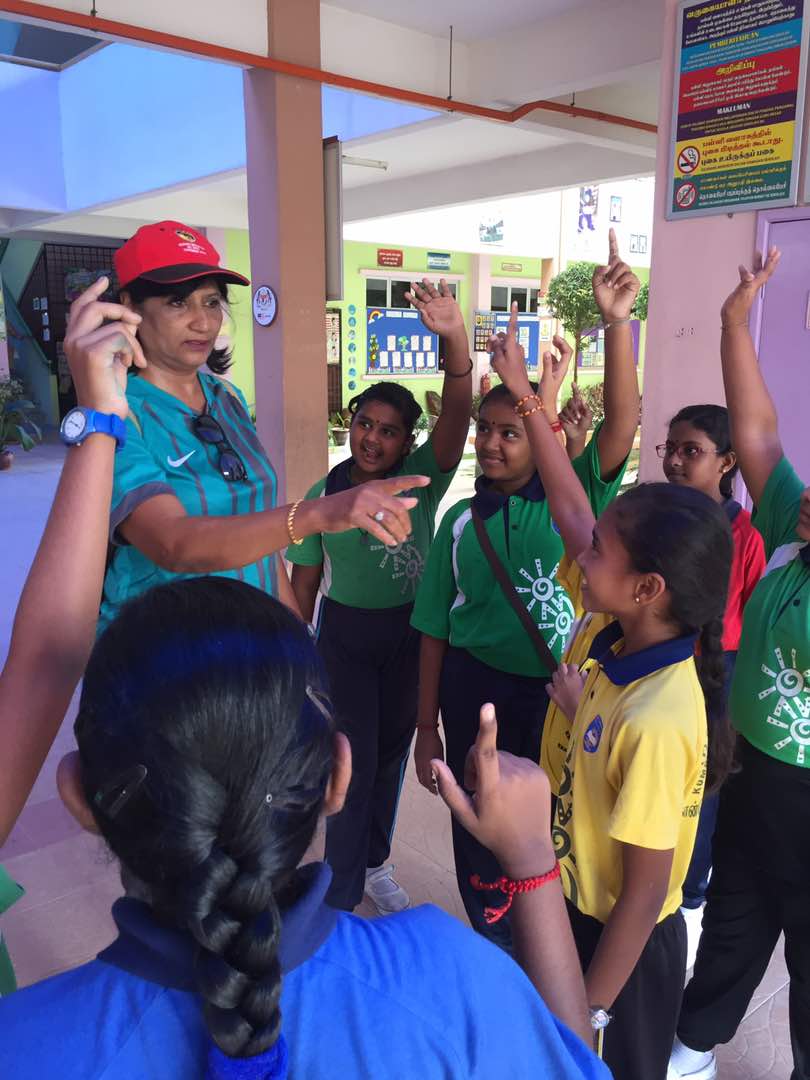 Gomez working with U-12 girl at with Sekolah Jenis Kebangsaan (T) Convent this year.

With support from her former teammates – especially FAM head of women’s football Normala Rashid, once her partner in the front line and also one the most prolific strikers of her time – Gomez lends her expertise to the schools/coaches in sessions held twice a week for schoolgirls.

I see many young, talented and high potential players nowadays. You see more girls coming out to play futsal. It is most rewarding when these youngsters reach the highest level and they thank you for the guidance and knowledge you have imparted. That’s the self-satisfaction I get, she tells us.

Normala, 56, – who began playing football at the age of six along with her brothers and male friends in her hometown of Taiping, Perak – remembers when she was told ‘not to waste time because football wouldn’t take her anywhere’.

In spectacular fashion however, she went on to prove her critics wrong by not only making it to the national squad by 1976, but also by being voted top player in the Asia Cup in 1981. Just like Gomez, Normala’s final international match was in 1985.

After her marriage that year, Normala took a break from the sporting world, but her passion for football remained – she completed coaching courses and became certified. In 1998, she formed a sports NGO called Kelab SriKandi (now known as Perak Queen’s Club, or PQC) and has since trained children, especially under-12 boys and girls, who want to play football.

“As founder, and by managing PQC, I contribute consistently by engaging with the community and local sports associations to train and coach youth (12-18 years) in sports, especially football,” she says.

“So far, there have been five to 10 PQC members who were selected to represent the state and national teams in various sports, including futsal (national team).” 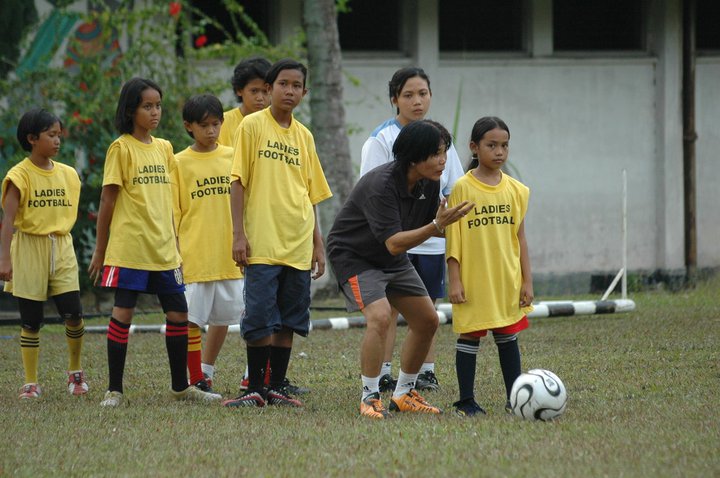 Normala was one of the most prolific women strikers of her time.

A vision for girls in football

Among these achievements are: the first ever gold medal for the national women’s team at the Arafura sports festival; a semi-final qualification at the AFF Cup in Myanmar, and the first national women’s futsal interstate championship.

“After a year, I was called back to Perak to serve as the state sports development officer,” she recalls.

“Then I returned to FAM last year to head the women’s unit once more. There have been many positive developments over the past 10 years, but I strongly believe that a lot more can be done.”

In her role, Normala is developing various projects to support the objectives of the Women’s Football Strategic Plan (2013-2018).

Among them are to attract more schoolgirls to the current grassroots programmes (in which former players like Gomez are actively involved), to develop more women coaches and to look into the possibility of a domestic league.

“We have many talents and most of them come from schools. We need to make the base bigger and develop it to be able to identify talent.

I have also observed that the current approach [to talent development] can be improved to suit the changes of this era. The Generation ‘Y’ and ‘Z’ may need a different style,” said Normala.

She also believes that more adults need to play a role in nurturing a love for sports:

“I believe we need to train more sports leaders. These are the people who can drive sports activities for the kids and communities.”

Same principles, on and off the field

For both women, their years as footballers have shaped their characters, drive and confidence. Normala credits her achievements to life on the pitch.

“I have been in sports since I was six years old; as an athlete, coach and now a leader. It continues to help me understand all types of characters, see symptoms of issues and intervene before it gets bigger.”

Sport helps us solve problems as a team and develops strategic thinking in the planning and execution of projects and programs. Sport integrates people from all walks of life.

Gomez says her journey in football has enabled her to approach life in a manner that parallels the principles of sport.

“On and off the field, I am confident, disciplined and respectful. I have had many great experiences through sports, which have taught me valuable life lessons, and prepared me for the future.

It is because of these experiences that today, I can accept any role given to me with confidence,” she said.

I am so grateful to the Negeri Sembilan State FA and the people who have trusted me to lead, and for the opportunity to meet so many friends, coaches and families that will forever have an impact on my life.

“I choose football because of my passion. When I watched “Ola Bola” (a 2016 Malaysian sports film) at the cinema, it brought back memories of my playing days with the national team.

The sacrifices and hard work we put in cannot be said, but I felt the tears. Ladies football is still lacking awareness, so I hope this SEA Games, more people will come to support them,” she says. 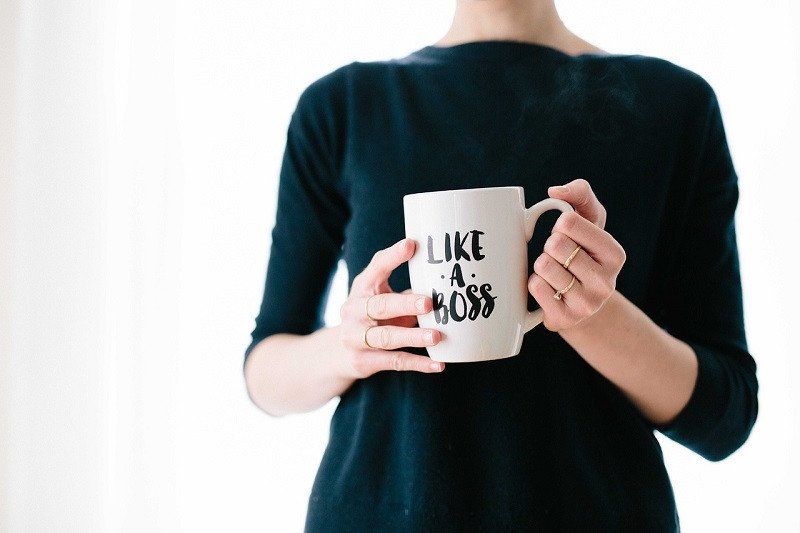 Enhancing The Players In Your Team