Limitless: The Life Of Melvin Tong 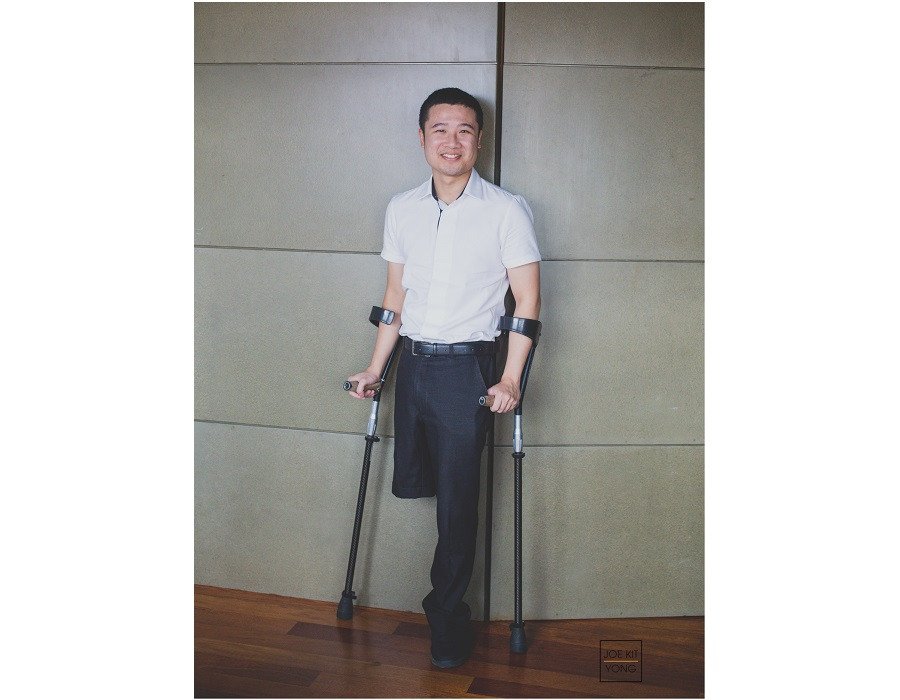 Melvin Tong lost his right leg to fibrosarcoma, a rare form of malignant soft tissue cancer. Since then, Tong has seized every day, developing a tenacity of spirit that in turn champions others to transcend their circumstances. In a long, late-night chat with Louisa Devadason, Tong shared his extraordinary story and thoughts on overcoming his setbacks.

In April 2010, Melvin Tong became the first amputee to scale Mount Kinabalu. He reached the summit driven by an amiable stubbornness forged by the words of well-intentioned people whose help often meant asking him to limit himself – typically to a desk job and to a life that he believed did not fulfil his fullest potential.

It is this very perseverance that characterises Tong’s doggedness not to be an observer to life’s pain and opportunities, idly watching it pass, but rather to throw himself completely into the experiences and challenges of each day. Tong did not merely lose a limb and then go on to climb a mountain. In achieving the latter he also raised RM150,000 in funds and public awareness on child abuse for Shelter Home. Two years later, Tong was skiing with the aid of special ski crutches.

With every experience, Tong reaffirmed his hopes that amputees and the differently-enabled can redefine what society too casually labels as “impossible”.

Adaptability in business and in life

When he was not busy pushing his physical limits, Tong delved into a handful of businesses. Recently, he transitioned from a supercar business with his twin brother Kevin, importing luxury vehicles like Ferraris and Bentleys, to a shared-economy model business called mlux that instead extends into car and hotel services.

“The business model we had for our supercar business became outdated. The shared-economy business model wasn’t possible back then but now it’s taking over. While one’s direction can easily be swayed if we are not aware of our vision, we also need to be resilient and ready for change.”

His explanation for this business decision echoes his approach to life as a whole. “Being adaptable is key for growing and being successful – not going down with a sinking ship because you’re afraid of change,” he says.

Tong wants to be successful but says his end goal isn’t to be a high-profile leader or motivational speaker; that’s not how he defines success and it’s also not what he feels being a leader is all about.

“I just want to share my story. If people want to hear my story, if it gives them hope in dark times or if it helps them see a light at the end of the tunnel, I want to help them feel encouraged and hopeful. Ultimately, I don’t know if everyone would say I am successful and I do not necessarily feel like a leader. However, I am striving to become an authority in my line of work and I am striving for excellence in what I do. If people look to me as a leader, that should just be a by-product of my dedication and commitment to being the best at what I do and living my best life.”

He reveals that his mother raised him to see the seeds of success as something intrinsic, and he has shaped his views around this. For Tong, success isn’t something that anyone else can truly pick out in you. It’s in how you feel about yourself and your life rather than how you appear to others physically, financially or even how colourful your life appears.

I sense a determination and glow in Tong that arises from his view on life. I can tell that success, for him, is about conquering the next challenge and pushing himself in his own time and on his own terms. I think this is brave and often easier said than done, but Tong appears to be living exactly that way. 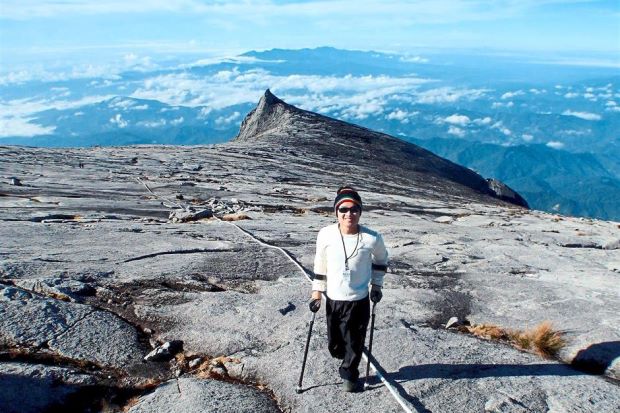 Tong chuckles when he says, “I know I can be a lazy person. My friends tell me I am (lazy) all the time and they’re right.

“It doesn’t mean I am less driven or dedicated to accomplishing my goals,” he elaborates. “Rather, it pushes me to find simple innovative solutions. Yes, it’s not something you want to brag about at a job interview but, ironically, I know it makes me a more efficient problem-solver.”

He believes it’s important to have an attitude that focuses on our strengths and the strengths of others and that sometimes means turning a “weakness” into strength, just as he redirected what he believes is his quirk – being a little lazy – into a resource.

I think this is what makes Tong so interesting. He draws people in with his outlook on life and how that translates into his business and personal choices. He says that in turn, people’s curiosity about his condition and about what he was capable of ignited a desire in him to achieve more. In losing his leg, he gained new insight into himself and others. He realised that his experience was a powerful reminder to live a fulfilling life that would challenge him and inspire others. His fervour is infectious. 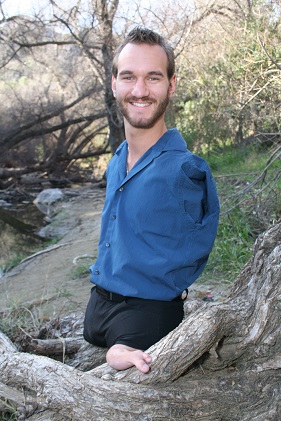 Many people enthusiastically told Tong he and Nick Vujicic should meet. So he raised funds with the help of others and helped to bring Vujicic to Malaysia where the latter delivered a talk about bullying among youth and how people could treat each other with dignity and respect.

Tong had the privilege of spending a lot of time with Vujicic and realised the things he had to be grateful for. He says, “Many people hear the inspirational story and the charisma Nick shares but it can be easy to forget that in spite of the humour, courage and strength, every day for him is pretty tough. How he lives is incredibly challenging but also brave.”

Personally, Tong feels his disability had done him a favour. He’s found a new voice and an identity rooted in hope and perseverance. He gets to talk to people, he has an amazing story to share and he feels he’s seized the opportunities that arose from this pain.

Humorously, he says, “I count priority lanes and disabled parking spots as my blessings when I think of the long queues and driving in circles looking for a spot. It’s silly but sometimes you have to remember the little things.”

Through Vujicic, Tong became more aware that physical disability isn’t one’s greatest challenge. The real challenge lies in having a “disability mindset” – something that anyone could have regardless of their physical condition. Such a mindset holds us back because of our own self-talk and the place we give to the negative messages of others in our lives. 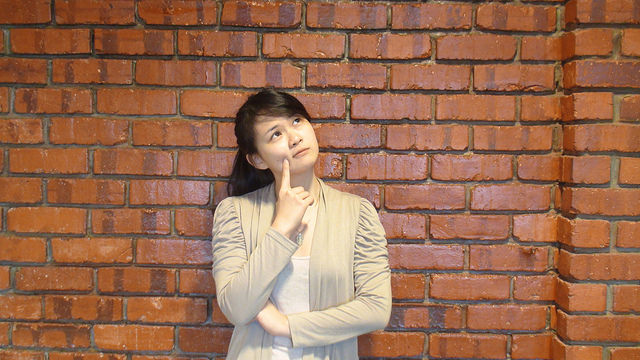 Listening to Tong speak of himself and Vujicic reminded me of a time in university when I was studying a subject titled “Leadership and Life Skills”. We explored the traits that leaders are meant to have, from their voice to their appearance to their stature. My lecturer, Justin Yap, showed us a video on Vujicic’s life in the final class.

When the video had ended and we were sitting there teary-eyed and inspired, Yap said, “I could end this lecture by saying that if he can do it, you can do it but that’s cheap advice. Instead, I want to say this: Nick does not have most of the attributes we have discussed in this class, and yet, how could we say he isn’t leading people? He leads because the life he is living is extraordinary and inspirational and it’s a life we want to live and follow and that has made him a natural leader.”

I was struck by how true that is. People like Tong and Vujicic may not have the voice of Barack Obama, or look like Justin Trudeau or possess a strategic mind like Lee Kuan Yew’s, but they are people whose hearts and tenacity we aspire to have. We want to know how they did it so that we, too, can gain a sliver of the insight that makes them natural leaders.

Providing the right kind of support

Tong explains that society tends to unintentionally limit those with disability, often when making attempts to “help”.

He believes the best thing that society and parents can do is to first start listening more to those with disabilities, particularly the youth who are still coming to terms with their identity. 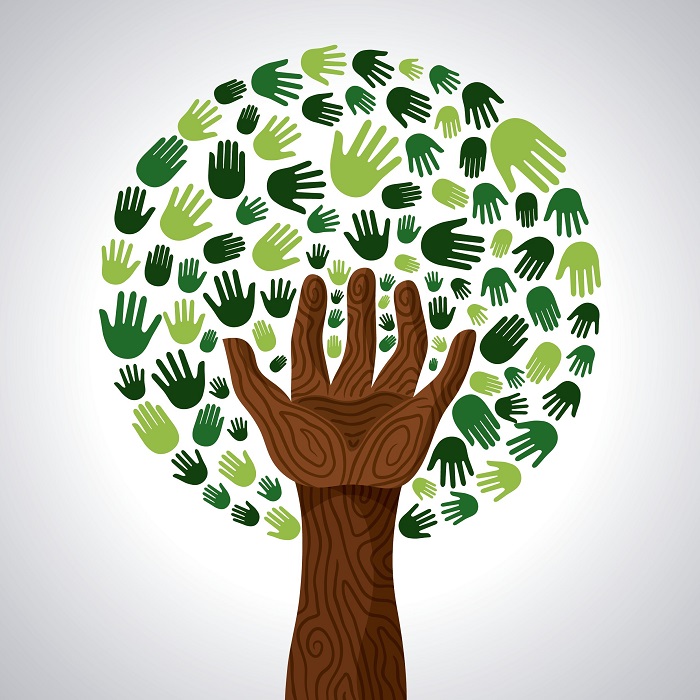 “People with disability are often misunderstood. We think they are asking for more benefits or welfare or assistance when all they want is for their needs to be heard.”

Tong believes that he and others with disabilities hope to be seen more as differently-enabled rather than just different. He would like society as a whole to start believing that even though the disabled may not do things the conventional way, they can achieve the same goals and be contributing members of society.

In relation to government policies, Tong added, “Free passport renewal is a great benefit but an unnecessary one because so many people with disability put their money into managing their disability that travel is not a priority. So finding out what it is that they need might put the budget for free passports to better use.”

He added that car modifications for the disabled are often cut-and-dried, so they only address certain kinds of needs and are therefore not comprehensive. Meanwhile, many policies have been created to aid the disabled, but many of these appear to be outdated and do not address the poorest of poor with disabilities. He believes that is something that needs to be re-evaluated and addressed.

Tong hopes to see policies diversify and expand to create a more comprehensive plan for the disabled. This includes recognising more groups of people with different disabilities, such as chronic pain sufferers, whose unseen disability often goes unsupported and unaddressed. He believes that policies should focus on enabling people to work and contribute in their own way rather than merely offering them cash in hand or ad hoc benefits here and there.

First steps up the mountain 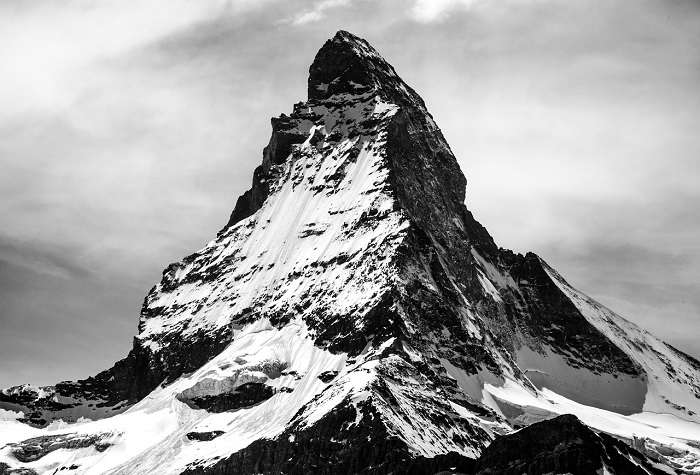 Tong has simple advice for those facing adversity, but these are the very thoughts that got him through some of his greatest hurdles.

“Say ‘yes’ to the challenge first and take it one step at a time. Overcoming each hurdle as you go and figuring it out as you go. We do not have it all figured out but we still need to press forward. Think of the most difficult thing you can think of. What feels impossible to you? For me it was climbing the mountain,” says Tong.

He adds: “And also public speaking – I struggled with it all of high school. So then I created a plan to face my biggest fear. I climbed a mountain and I stood up and shared my story to an audience. And when I stared down the barrel of my greatest fear, I felt stronger and more capable than I ever had. Then I really felt alive.”

Louisa is a freelance writer with Leaderonomics and is a psychology major. She is passionate about human rights, raising awareness about stigmatised issues and personal development. What did you think of this article? Share your thoughts with Louisa at louisa.allycyn@leaderonomics.com. 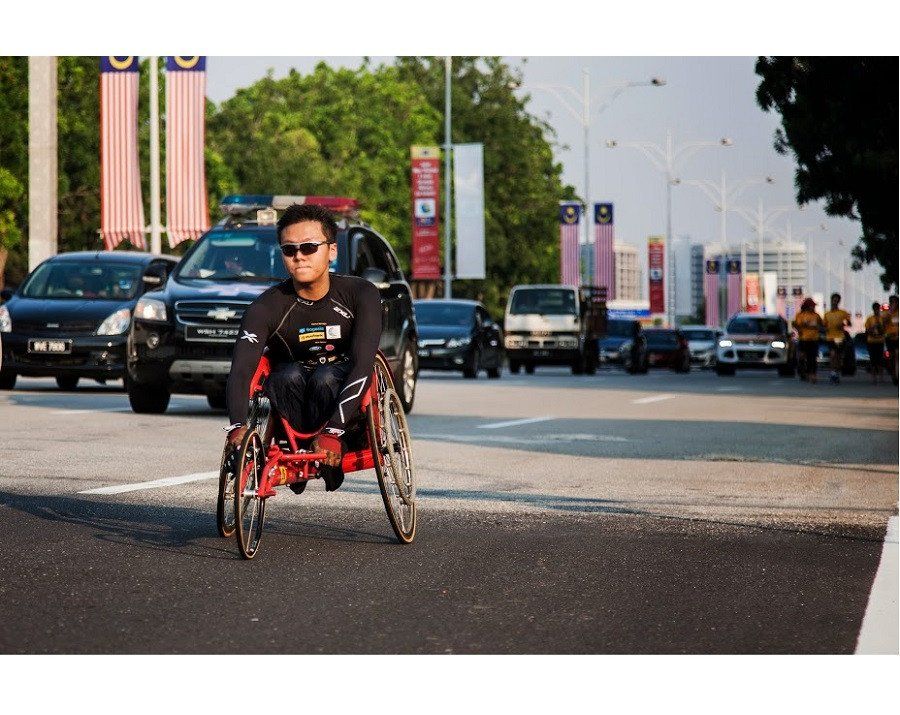 Reflections On Finishing The Race With A Disability