In Conversation with Barack Obama 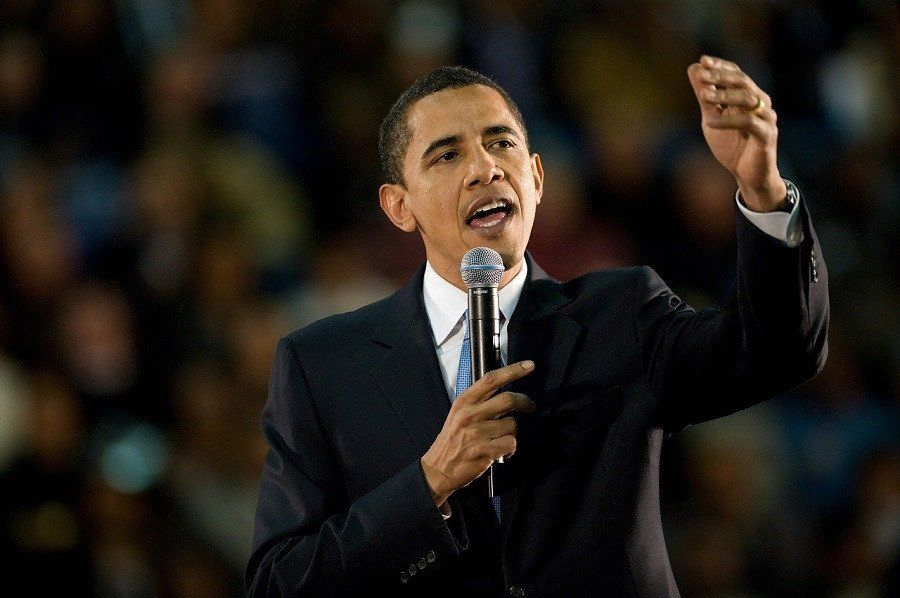 When I read Michelle Obama’s memoir entitled ‘Becoming’ early last year, one particular page made me pause with great excitement. It mentions as a newly-wed, Barack Obama who went to Bali to complete the writing of ‘Dreams of My Father’ as the due date was fast approaching. He needed to do this without any distractions and hence some solitude time in Indonesia.

Dots were connecting in my head and the outcome – I was convinced that in 1993 as a fresh graduate on a girly holiday in Bali I had met Barack Obama. It was at an IDD (international direct dial) phone queue. This memory is very vivid because I had been loudly coerced in Bahasa Malaysia, by the girls seated in a nearby rented Suzuki Jimny to make small talk, and provide them with feedback of my endeavours.

At one point I rated him 7 on a scale of 10 and let the girls know, certain this tall handsome fellow behind me would be clueless to our shenanigans. To my deep embarrassment, the kind you remember after many years… after the call as I exited the phone booth, he smiled and wished me good night and have a pleasant holiday in perfect Bahasa Indonesia. My jaw dropped and we drove off as if having robbed a bank. 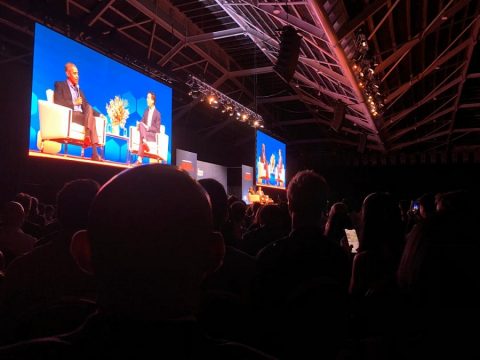 Fast forward to today, I must admit I am a fan for the original reason that I attempted small talk and much more. When the opportunity presented itself for ‘In Conversation with Barack Obama’ in Singapore early December 2019, I grabbed it.

My admiration for Mr Obama has evolved over time and it lies very much in his character and how he carries himself. That was the pull factor to want to be in the same space as him. Most of the things he’s previously talked about would be easily youtube-able, but I still felt the need to go and see him. This trip to Singapore was definitely a pilgrimage to meet a hero of mine.

Here are five things I learnt from being in the same room as Barack Obama:

When it finally came to bring him out on stage he just walked out, not wanting to waste time with formalities. It felt like he actually cut off the moderator who was in the midst of rolling out all his credentials and achievements.

It gave me a sense that this man is not interested in hearing ego-inflating statements. He just wants to share his views and likes things to be kept simple and straightforward. When asked about his life after being President he said he does not miss the fuss and formality that comes with being President.

When he moves, he flows. When he talks it’s deliberate and precise, adding to his physical swag is his swag when engaging with others. If asked a question, he paints a full context of the situation and then goes into his response. This helps to reduce miscommunication, especially in a time where the root of most of our conflict is poor understanding of each other.

The other aspect of how he responses in public is the neutrality of words selected coupled with the open and positive body language. In a time where some need to put others down in order to be up, he stayed clear of the temptation to run down anyone, especially his successor. With this he comes across as deliberate, credible and thoughtful.

This does not mean he does not have a sense of humour. When asked if he could extend the session by 15 minutes, he said Michelle is on a plane waiting for me so if you are willing to tell her I’ll be late (to the start of their annual Christmas vacation in Hawaii) I’m ok with it.

Having stepped off one of the most impactful platforms of influence in the world, as the President of the United States he now has created a new platform with the set-up of his foundation with his wife. He continues to advocate for the causes close to his heart namely leadership, climate change and social impact through the Obama Foundation.

On this Asia Pacific year end tour he and Michelle Obama were in Kuala Lumpur to engage with more than 300 young leaders from the region and inspire as well as equip them with tools and support to drive change in their communities.

I especially like this photo (see below) of him in an unscripted moment in the White House. It depicts him fist bumping a janitor as they cross paths in the hallway. There is no one there except his staff, it’s not on the campaign trail, it’s not for any official function. 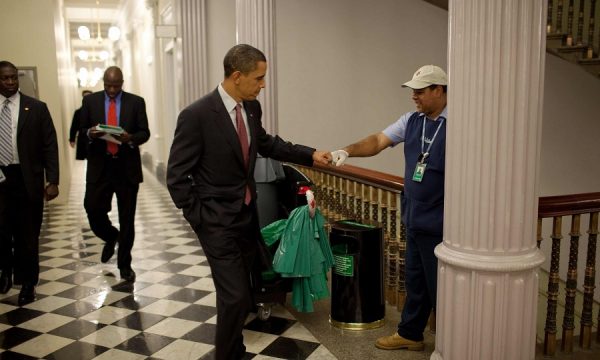 There is a quote which says:

Integrity is doing the right thing, even when no one is watching.

To me he seems to be the type of person who only has one way of being – no double standards, no pretences according to who is in the room or how important they are. In the session in Singapore he frequently spoke about his team and the experts around him as the basis for him being able to solve difficult problems that came his way.

Even as he spoke, I noticed he talked with the first person plural ‘we’ rather than ‘I’. This is somewhat distracting at first but it is a clever and smart way to engage the audience. The act of using we is a rather unique way of making people involved in a conversation and then making them believe they have influence over an issue through humility.

In this day and age too many leaders come across strong and egoistic. His leadership style is more gentle and persuasive in nature. He has been seen to shed tears when talking about the senseless loss of life due to gun violence or to say a heartfelt thanks to his wife and inner circle towards the end of his presidency.

Vulnerability is a very powerful leadership trait as it fosters connection and builds trust.

In fact he mentioned that if the world was run by women leaders for 2 years, half our problems would disappear. My take on it is I believe he was referring to women as being more willing to be vulnerable and build stronger relationships to facilitate getting things done. In addition to this, perhaps there is a natural tendency for women, especially mothers to set aside differences in order to solve problems in families and communities, especially if it is for the sake of the greater good.

To tie it all in

Barack Obama possesses the character and values of a great leader. He will always be remembered as a statesman and a leader of the highest repute across the globe. There is a universal appeal to his character and conduct which is rare and refreshing.

That’s why I have decided to capture these 5 leadership traits of Barack Obama that makes him an excellent politician and leader of a nation for 8 long years. I can only imagine that great things will come with the release of his memoirs and the impactful work from his foundation. In view of more recent events, I now revise my 1993 score to a 10/10.

You may also be interested in: A Presidential Lesson on Why Kindness in the Workplace Matters 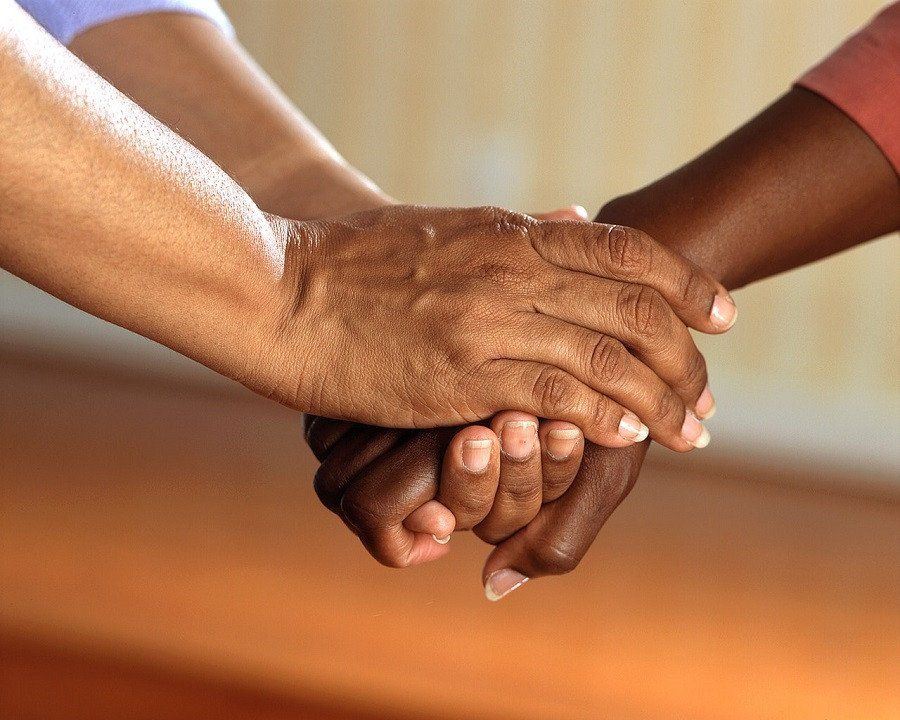 Rupa Sivanoli is the CEO and Founder of Talent Tribe Solutions. Rupa has over 25 years of work experience in the consulting and services sector. Her 12 years in consulting lies predominantly in change management, project management, HR assessments, talent development, employee engagement as well as diversity and inclusion. She has served within the Big Four international consulting firms, in senior managerial roles leading projects focusing on a variety of operations and strategic improvements. Subsequently, she served 5 years in an Asia Pacific shared services center working as a Senior Manager in operational and human resource roles within a German based Fortune 500 company regarded as a world leader in the chemical industry. She is passionate about change and transformations be it organisational or personal and believes its all starts with self discovery. Upon knowing one’s gifts (strengths), individuals are empowered to make great contributions to organisations and communities. This led her to becoming a Gallup Strengths Coach who has coached senior leaders from various industries.