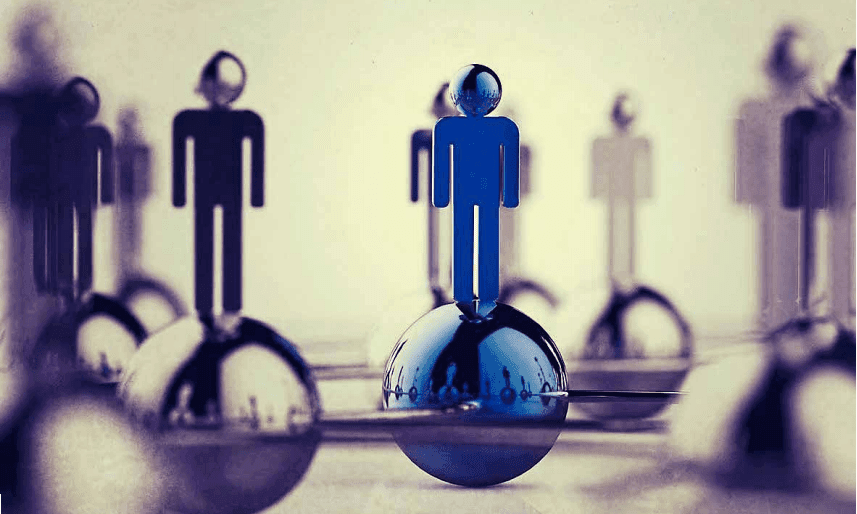 As Malaysia charts a transformational path towards a high-income economy, jobs for skilled workers continue to grow across key economic sectors. To ensure a productive workforce, Malaysia must ensure a high-quality flow of talent supply to fill these jobs to avoid growing skills imbalances, as skilled talent is a critical factor in driving the economy.

Are we lacking the talent to drive us forward?

Although the Malaysian workforce is becoming more educated over the years, companies are finding it difficult to find talent with the right skills to fill positions that are critical for the industries’ growth.

According to the Department of Statistics’ Labour Force Survey Report 2015, while the size of the labour force with tertiary education has grown to four million, the number of employed persons in high-skilled occupations was only 3.6 million in 2015, indicating a skills mismatch.

A recent study by Talent Corporation Malaysia (TalentCorp) and the Institute of Labour Market Information and Analysis (ILMIA) found that the top three difficulties that companies faced in filling up critical occupations are:

Why is there a skills mismatch between talent demand and supply?

While Malaysia has taken steps to address the skills deficits and mismatches through skills development and graduate employability programmes, analysis by the World Bank and others suggest that public investments in solving the skills mismatch are overly supply-driven, muffling the signals that the market is sending about the skills that are sought.

Compared to Korea, Ireland, Singapore, Australia and the United Kingdom where government involvement in skills development is also substantial—Malaysia lacks permanent, structured channels of information among employers, skills providers and job seekers. This has led to a build-up of skills deficits and mismatches.

Attempting to resolve the causes of skills imbalances is a complex process.
It requires enormous coordinated effort by individuals, employers, the academia and the government to ensure the skills formation system is responsive to industry needs and the work-life aspirations of job seekers.

Pivotal to this is the identification of the talent shortage faced by Malaysia’s key economic sectors which will help the various stakeholders better understand the specific skills that are in demand by the key industries driving Malaysia’s economic growth.

According to the World Bank,

“As Malaysia’s human capital challenges become more complex, the country should consider developing a framework for establishing a regularly updated critical skills shortages list. In line with making policies more demand-driven, such a list would help to identify skills deficits and match them with the requisite supply of talent in a dynamic fashion.” Source: Malaysia Economic Monitor (December 2014)

What are the critical occupations in Malaysia?

As the economy remains on a steady growth path, vacancies for high-skilled workers will continue to grow. To ensure a productive workforce, Malaysia must ensure a high-quality flow of labour supply to fill these jobs to avoid an ever-growing skills imbalance.

6 key sectors and their most sought-after occupations* 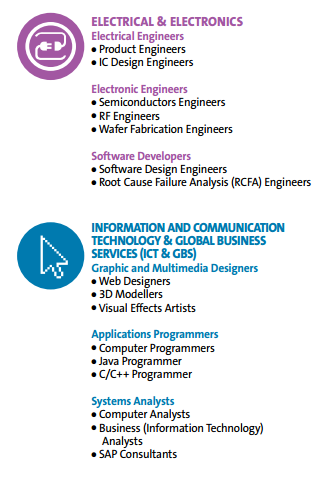 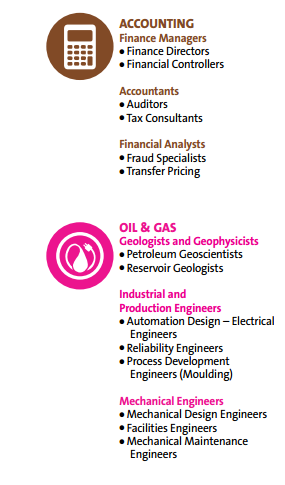 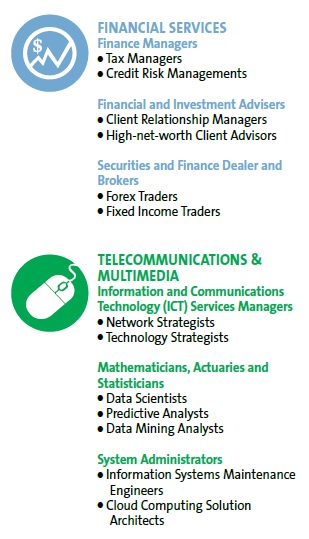 A quick guide to the Critical Occupations List (COL)

The Critical Occupations List (COL) identifies the jobs most in demand in key sectors of the economy, and for which industries may be facing shortages or difficulties in hiring.

It is developed by the Critical Skills Monitoring Committee (CSC), which is jointly led by TalentCorp and the Institute of Labour Market Information and Analysis (ILMIA). The input of the CSC would be used as part of the proposed Human Capital Council to be chaired by the Prime Minister to coordinate the Government’s human capital policies.

How was it developed?

The COL combines a top-down and bottom-up approach, a framework developed together with the World Bank and is in line with what is practised in the United Kingdom. It is developed in three stages:

1. Top-down analysis: National level statistics are rigorously analysed to detect occupations that are sought after. In particular, the Department of Statistics’ Labour Force Survey 2011-2014 is analysed to identify occupations exhibiting high employment and wage growth, an indicator of high demand.

2. Bottom-up consultation: Results from the top-down analysis are then validated by the industry via a combination of surveys and consultations, in addition to engagements with sector regulators (eg MDEC for ICT and MCMC for telecommunications).

3. Public consultation: The COL is released publicly and is open for feedback, providing the opportunity for government agencies, employers and individuals to provide further input or evidence on sought-after occupations. 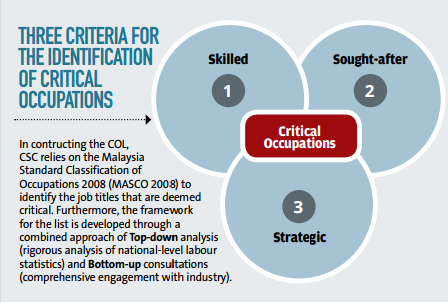 How can we benefit from it?

Understanding the specific skills that are in demand by key industries can help:
1. The government coordinate policies and prioritise publicly financed initiatives, such as scholarships, reskilling programmes or inward immigration, to enhance the supply of sought-after skills in Malaysia.

2. The industry to go beyond business as usual in its recruiting strategy, and to explore alternative measures such as targeting Malaysians abroad and investing further in developing sought-after skills, whether through in-house training or industry-academia collaboration.

3. The general public such as parents and young talents, in selecting their course of study and career paths based on areas in demand.

When was it published?

The pilot Critical Occupations List 2015/2016 was published in December 2015 based on labour data spanning 2011–2014. The pilot document identified 42 occupations from six key economic sectors as critical.

The list will continually be refined and updated on an annual basis to ensure that it remains relevant and provides an accurate and timely picture of skills imbalances in Malaysia. 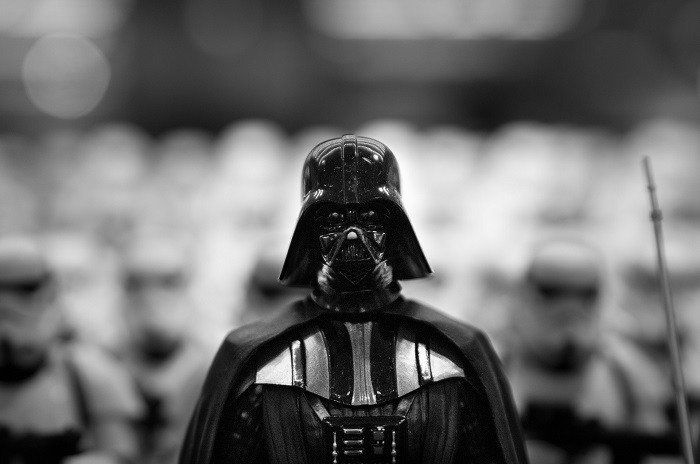 How To Stop Your Staff From Turning Into Darth Vader